A collection of intersecting stories set at a powwow that bursts with hope, joy, resilience, the strength of community, and Native pride.

In a high school gym full of color and song, Native families from Nations within the borders of the U.S. and Canada dance, sell beadwork and books, and celebrate friendship and heritage. They are the heroes of their own stories.

Read an excerpt of ANCESTOR APPROVED from Heartdrum/HarperChildren’s, brochure pages 24-43.

Published in partnership with We Need Diverse Books. 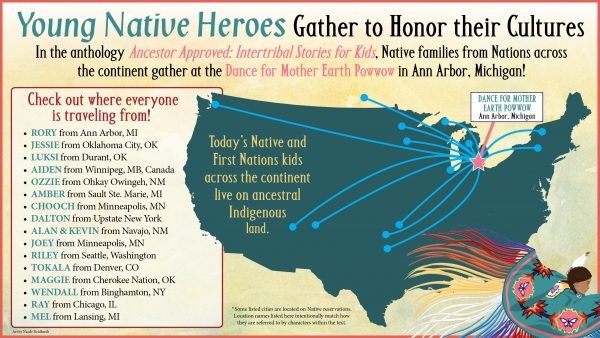 Order ANCESTOR APPROVED: INTERTRIBAL STORIES FOR KIDS, edited by Cynthia Leitich Smith. A portion of the royalties will be donated to the Native Fund at We Need Diverse Books. 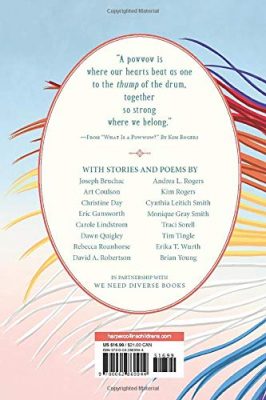 Cover Reveal: ANCESTOR APPROVED by Cynthia Leitich Smith from We Need Diverse Books. PEEK: “The story behind Ancestor Approved is truly one of community and collaboration, much like the intertribal powwow reflected in the book…Nicole Niedhardt’s gorgeous, dynamic cover draws its inspiration from Jessie, the protagonist of Kim Rogers’s short story, ‘Flying Together.'” 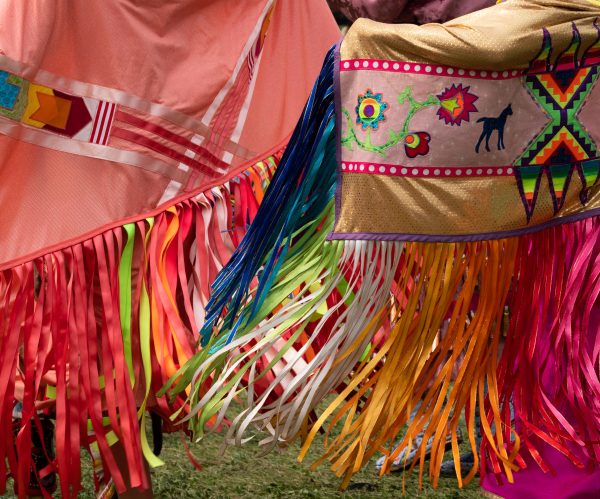 ★ “With exceptionally strong writing throughout, and appended with glossary, author notes, and acknowledgements, this makes an appealing choice for those just learning about contemporary Indigenous life as well as readers well-versed with the powwow circuit.” —Booklist, starred review

★ “A groundbreaking Indigenous anthology for young people. Readers can join the fun in this collection of 18 contemporary stories and poems about loving families from various parts of the U.S. and Canada who travel to meet, dance, sing, socialize, and honor Native traditions at an intertribal powwow.” —Kirkus Reviews, starred review

★ “…a wonderful introduction to the included authors’ work and a persuasive encouragement to seek out more Indigenous stories.” —Publishers Weekly, starred review

“[Kenny] Ramos narrates the boys’ stories in a lively and youthful voice, capturing their nerves and excitement over joining the festivities. [DeLanna] Studi expresses the energy and emotions of the girls and is especially skilled at portraying older loved ones. Both smoothly narrate words in multiple Indigenous languages.” —AudioFile

“…a thoughtful and sometimes funny celebration of a celebration, and whether kids are veteran powwow-goers or new to the experience, they’ll long for the convivial warmth of the festivities.” —Bulletin of the Center for Children’s Books

“All libraries should make room on their shelves for this collection of Native-voiced stories.” —School Library Journal

“This anthology offers readers a variety of images of Native children while also introducing them to vocabulary from several different Indigenous languages, compiled in an appended glossary. According to Rogers’s poem: “A powwow is / friends and family / …a way to remember those / who’ve passed on / …a place for belly-laughing / …healing / and soul-soothing,” and this volume reflects all of those elements and more.” —Horn Book Magazine

“Much of American children’s literature has for too long relegated Indigenous people and their stories to the category of historical fiction…shines a long overdue spotlight on a joyful aspect of Native life in America today.” —BookPage

“The collection’s strength is the rich variety of contemporary Indigenous experience, families and culture it portrays.” —Toronto Star 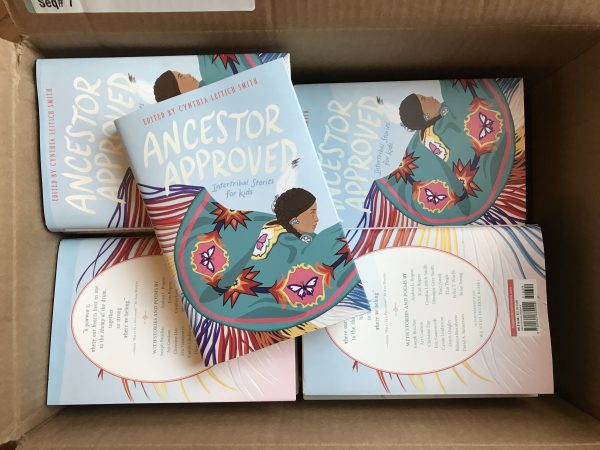 “The contributors joined efforts—by text message, email, and an online message board—to create this engaging collection of interconnected stories, poems, and visual artwork centered on a two-day event, including the characters’ preparations and journeys home.”

Two of the characters, Ray Halfmoon and his grandfather, from “Between the Lines” by Cynthia Leitich Smith were first introduced in INDIAN SHOES (HarperCollins, 2002)(Heartdrum, 2021).

Authors Interview: Cynthia Leitich Smith and Kim Rogers on ANCESTOR APPROVED from Cynsations. PEEK from Kim: “When editor Rosemary Brosnan told me that Jessie would be featured on the cover, I was shocked and delighted. This was the first time I’ve ever seen a Wichita character illustrated anywhere.”

A Book Invites Young Readers to the Powwow by Laura Simeon from Kirkus Reviews. PEEK: “It’s important that we get to know characters whom we can see as friends and whom we can identify with as representative of shared parts of ourselves.”

Episode 436 (Podcast): Curating a Middle Grade Anthology of Intertribal Stories: Interview with Cynthia Leitich Smith by Gabriela Pereira from diyMFA Radio. PEEK: “In this episode, Cynthia and I discuss… What elements are important to include when writing specifically for Middle Graders and how MG is distinct from YA. Why it’s important to create an inclusive feeling  of a ‘we’ not ‘me’ book within diverse literature.”

The Most Anticipated Children’s and YA Books of Spring 2021 from Publishers Weekly. PEEK: “Using the framework of an intertribal powwow and detailing aspects of Native culture alongside universal themes, 17 Indigenous authors craft stories… as a ‘sampling of the many rising Indigenous voices who are changing children’s literature for the better.'”

Book Review: Ancestor Approved: Intertribal Stories for Kids, edited by Cynthia Leitich Smith from Ro Menendez at MG Book Village. Peek: “It is uncommon to find plots in middle grade novels where kids are seen by the adults in their family and community as individuals worthy of respect.  This respect was shown by action in this anthology: the adults in these stories not only validated by not only listening to what kids had to say but also by taking their feelings into consideration when it was time to act.”

Coming Soon: 14 Diverse Books That Make Us Excited for 2021 from Colorful Pages. PEEK: “In a high school gym full of color and song, people dance, sell beadwork and books, and celebrate friendship and heritage. Young protagonists will meet relatives from faraway, mysterious strangers, and sometimes one another (plus one scrappy rez dog). They are the heroes of their own stories.”

Celebrating Heartdrum Launch from the Mixed-Up Files of Middle-Grade Authors. PEEK: “We’re talking about a collection wherein the hero of one story might appear as a secondary character in another one. Each can stand alone, but in reading them all, kids will glean added layers of resonance.”

Incredible Middle Grade Book Releases To Look Out For In 2021 from The Nerd Daily. PEEK: “Edited by award-winning and bestselling author Cynthia Leitich Smith, this collection of intersecting stories by both new and veteran Native writers bursts with hope, joy, resilience, the strength of community, and Native pride.”

Books for a New Year & New You from ColorLines. PEEK: “‘Ancestor Approved’, edited by author Cynthia Leitich Smith (Muscogee Creek), is an anthology of children’s stories from across Nations and generations…”

New Kids’ and YA Books: Week of February 8, 2021 from Publishers Weekly. PEEK: “Using the framework of an intertribal powwow, 17 Indigenous authors craft stories that explore themes such as ethnic identity and ancestry. The middle grade volume earned a starred review from PW.”

Indigenous Peoples Booklist from The Children’s Book Council. PEEK: “The CBC has gathered Indigenous & Native Peoples titles from books submitted to the CBC for our Goodreads Diversity booklist to create a great starting point to read more diversely.”

Add These February Book Releases To Your Kids’ Must-Read List from The Toy Insider. PEEK: “…intersecting stories by both new and veteran Native writers, set at the Dance for Mother Earth Powwow in Ann Arbor, Michigan. …stories of hope, joy, and resilience that showcase the strength of Indigenous communities and Native pride.”

19 Anticipated Books That Have Finally Been Released For You To Read from BuzzFeed. PEEK: “Some of the best authors today (including Rebecca Roanhorse, Joseph Bruchac, Christine Day, Eric Gansworth, and Leitich Smith herself) provide stories, which are an absolute joy to read.”

Contributor Dawn Quigley does a reading of “Joey Reads the Sky” for World Read-Aloud Day 2021. Advance to 43 minutes, 46 seconds or watch the whole group (they’re amazing!).

Let’s Talk! With Cynthia Leitich Smith by Sophia Hou from Time for Kids.

5 Indigenous People You Should Teach Your Kids About from Parents Together.

Indian Education for All: Your Guide to Understanding and Enjoying Powwows by Dr. Murton McCluskey from Montana Office of Public Instruction. PEEK: “A powwow is a gathering where Native American dancing, singing and celebration take place. There are several different powwows that take place throughout the country; however, this booklet will talk about powwows in general and, more specifically, about powwows along the northern tier of the United States.”

How to Have a Powwow in a Pandemic by S.I. Rosenbaum and Arigon Starr from The Nib.

How to Make Pucker Toe Moccasins from the Thomas Gilcrease Museum of American History and Art.

Diversifying Your Classroom Books Collection? Avoid These 7 Pitfalls from Kara Newhouse from KQED. PEEK: “…seven pitfalls to avoid when deciding what to leave in and out, accompanied by more than 50 title recommendations based on conversations in this piece to help kickstart the journey.”