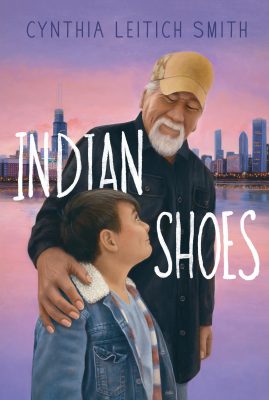 Reread your favorite chapter from INDIAN SHOES by Cynthia Leitich Smith (HarperCollins, 2002)(Heartdrum, 2021), then write a short story about a special time you shared with a grandparent or other adult. Like the author, be sure you give each of your characters a chance to speak for themselves. This is called “dialogue,” and it makes a story seem more real to the reader. It feels like you’re spending time with them, listening in. Try it!

Visual/Spatial (terrific bulletin board when complete)

In “The Accident,” Ray’s picture gets ruined because of Bandit. Paint a picture of your home, just like Ray did, and pour a paper cup full of water over it on purpose. Then, after it dries, cut it into the shape of a shoe that best represents you or your family (ex: ballet slippers, moccasins, baseball cleats, cowboy boots, in-line skates, ice skates, etc.)

A chapter is made of small events called “scenes.” Here are the main scenes from the first chapter in INDIAN SHOES:

Now, go through each chapter and list the scenes. Then, as a class, assign a scene to small groups to act them out. It doesn’t have to be exactly like the book, but it should stick to the flavor of it. Practice for a couple days, and then put on a play of the whole book!

In several instances, the author describes a sound that Ray and Grampa Halfmoon hear. For example, in chapter one rat-a-tat-a-clang is the sound of a trash can band, and ka-smack for the sound of a homerun hit. This is called “onomatopoeia.” It is when you try to make the sounds match the letters of the alphabet. Throughout your day, try to write down ten onomatopoeia words that represent sounds you hear. Be sure to write down what the sound represents.

Ray and Grampa Halfmoon always consider each other’s feelings before they decide how to act. For example, when Grampa is clearly feeling homesick, Ray decides that he would feel better if he had the moccasins. This is called “empathy,” when you can get inside the heart of someone else and feel how they feel. List at least three other examples of empathy in the book. Then explain what a kid could do in these situations: 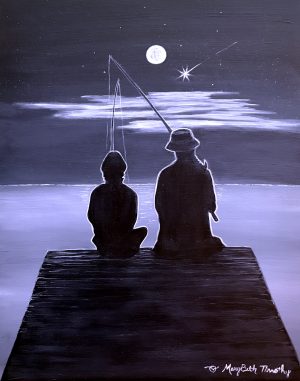 Ray finds a special spot of his own in “Night Fishing” where he can see “the lake blue sky stretched to the horizon. The water below glittered beneath the sun. It was quiet too. No rattling trains or trash-can bands. Ray could hear the squirrels play tag from limb to limb and he settled in to listen.”

Where do you go when you want to think? What does it look like? Sound like? Draw a picture of it to keep in your notebook. Before a test or other stressful moment, you can reflect on it and pretend you’re there.