A collection of intersecting stories set at a powwow that bursts with hope, joy, resilience, the strength of community, and Native pride.

In a high school gym full of color and song, Native families from Nations within the borders of the U.S. and Canada dance, sell beadwork and books, and celebrate friendship and heritage. They are the heroes of their own stories.

Featuring: “Between the Lines” by Cynthia Leitich Smith.

Available in hardcover and audio editions.

Booklist (starred): “With exceptionally strong writing throughout, and appended with glossary, author notes, and acknowledgements, this makes an appealing choice for those just learning about contemporary Indigenous life as well as readers well-versed with the powwow circuit.”

Kirkus Reviews (starred): “A groundbreaking Indigenous anthology for young people. Readers can join the fun in this collection of 18 contemporary stories and poems about loving families from various parts of the U.S. and Canada who travel to meet, dance, sing, socialize, and honor Native traditions at an intertribal powwow.”

Publishers Weekly (starred): “…a wonderful introduction to the included authors’ work and a persuasive encouragement to seek out more Indigenous stories.”

Shelf Awareness (starred): “…this uplifting assembly affirms the vitality of Indigenous life today and offers accessible situations and characters to all young readers.”

AudioFile: “Ramos narrates the boys’ stories in a lively and youthful voice, capturing their nerves and excitement over joining the festivities. Studi expresses the energy and emotions of the girls and is especially skilled at portraying older loved ones. Both smoothly narrate words in multiple Indigenous languages.” 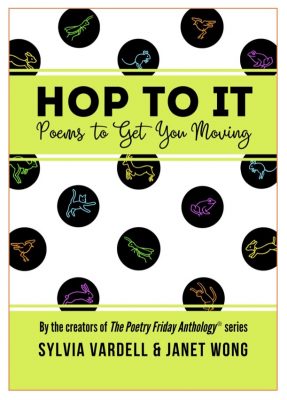 HOP TO IT: POEMS TO GET YOU MOVING, edited by Sylvia Vardell and Janet Wong, illustrated by Franzi Paetzold (Pomelo Books, 2020)

Contains 100 poems that incorporate a wide variety of movements—including deskercise! You’ll find poems on “2020 topics,” too, such as life during a pandemic, virtual learning, staying connected with friends, and standing up for what you believe in.

Available in a paperback edition. 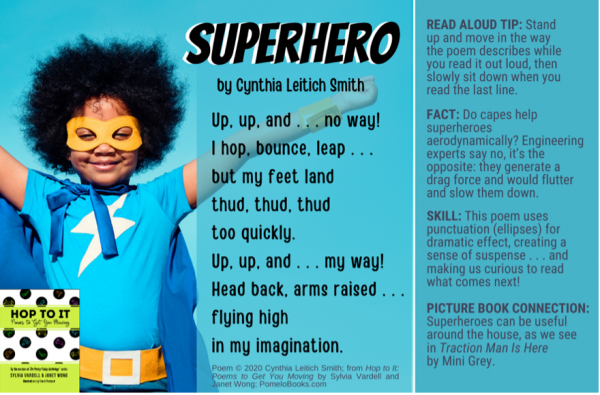 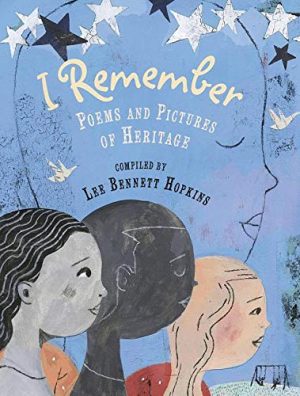 Diverse poets are paired with images by celebrated illustrators from similar backgrounds to pay homage to what is both unique and universal about growing up in the United States.

School Library Journal (starred): “Pairing the works of some of today’s most important voices in children’s poetry with illustrations by artists of equal talent makes this is a must-have for all elementary and middle grade collections.”

Kirkus Reviews (starred): “…a collection of poems and illustrations sourced from a diverse pool of creators.Each double-page spread or multipage sequence captures a childhood memory, an artist paired with a poet welcoming readers into an expansive space of youth and memory.”

Publishers Weekly (starred): “The corresponding artwork demonstrates a wonderful range of visual language and technique; there is truly something for everyone in these pages.”

Booklist (starred): ” A gorgeous must-have for all poetry units and an excellent collection for all libraries.”

Editor Interview: Louise May on I Remember: Poems and Pictures of Childhood by Gayleen Rabakukk from Cynsations. PEEK: “Lee Bennett Hopkins was the ultimate anthologizer of poetry for young readers. He had the uncanny ability to bring together a diverse group of poets to write around a common theme.” 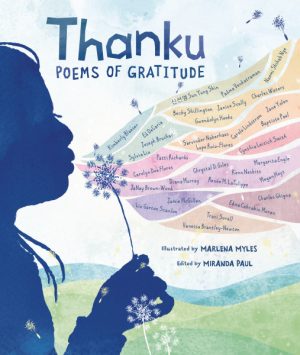 Publishers Weekly: “…contributor bios, easy-to-digest descriptions of poetic and literary devices used throughout, and a letter from Paul about ‘the myths and half-truths’ about Thanksgiving, and related misrepresentations of Native and First Nations people…a thoughtful resource for poetry students and teachers.”

Talking to Kids About Thanksgiving: Center Truth, Connection and Being Grateful by April Brown from PBSSoCal. 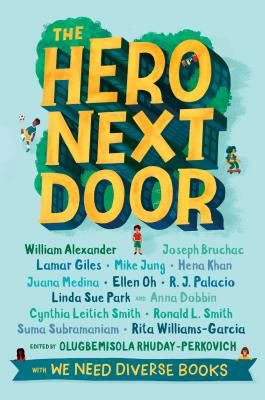 THE HERO NEXT DOOR; A WE NEED DIVERSE BOOKS ANTHOLOGY, edited by Olugbemisola Rhuday-Perkovich (Random House, 2019, 2021).

An anthology about everyday kid heroes (without superpowers) who make the world a better place.

Kirkus Reviews (starred): “A stellar collection that, in celebrating heroes, helps readers find the universal in the specific.”

Bulletin of the Center of Children’s Books (starred): “…collection of thirteen impressively varied short stories highlights diversity both in the identities of its young protagonists as well as in its eclectic storytelling forms. …a consistently solid anthology that introduces and then celebrates the efficacy of short fiction as much as it does diverse voices.”

School Library Journal (starred): “Heroes with superhuman powers wear capes and save the world from destruction. That’s not the kind of hero this book focuses on…. A great anthology with a message of spreading kindness and hope.”

The Washington Post: “This warmhearted middle-grade collection celebrates not the ‘larger-than-life icons’ but ‘the risk-takers, the friend-makers, the dreamers and doers’ whose caring and courage help create a kinder world. . . . As with the two previous anthologies from We Need Diverse Books, this collection admirably succeeds in making available to all readers a wider and more representative range of American voices and protagonists.”

THE HERO NEXT DOOR is featured in NEA’s 2018-2019 #ReadAcrossAmerica calendar. 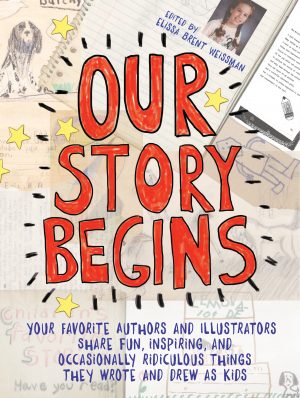 An anthology collection of quirky, smart, and vulnerable childhood works by some of today’s foremost children’s authors and illustrators.

School Library Journal: “An authentic, generous, and inspiring selection for tweens who wonder where their doodling or journaling might take them.”

Booklist: “…the main takeaway, of course, is that hard work and practice, as well as a lot of inevitable failure, is always part of honing a craft. A sweet, inspirational anthology for any kid who dreams of one day having their own name on the cover of a book.”

Kirkus Reviews: “The art and writing samples from childhood are occasionally exciting but more often typical of the age represented—and thus encouraging rather than intimidating to young creatives. The memoirs—all (unsurprisingly) engaging—range from humorous to serious, and some slip in good advice, both about the tools of the craft and about self-marketing.”

BCCB: “…a clear message throughout that this early work counts, whether you finish it, whether it’s completely original, whether it wins you the regard you hoped… this has curricular use written all over it (there’s even tips for young writers at the end) and the encouragement is strong and valuable.” 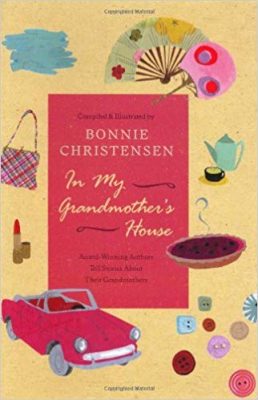 IN MY GRANDMOTHER’S HOUSE: AWARD-WINNING AUTHORS TELL STORIES ABOUT THEIR GRANDMOTHERS, edited and illustrated by Bonnie Christensen (HarperCollins, 2003).

An anthology collection of short stories by authors about their grandmothers.

IN MY GRANDMOTHER’S HOUSE is out of print. Look for copies at libraries and used bookstores.

VOYA: “The most entertaining contributions are Cynthia Leitich Smith’s ‘The Naked Truth,’ in which a granddaughter discovers that the nude figure painted in the basement is her grandmother, and Gail Carson Levine’s ‘A Visit to Grandma’s,’ as a granddaughter speaks out about her grandmother and her great aunts’ disrespect of her mother.”

School Library Journal: “An old painting in the basement allows Cynthia Leitich Smith to see her grandmother for who she really is, and to see herself in a new light as well.”

Booklist: “A fine collection that will encourage teens to reflect on their own families and recognize the individuals behind the family roles.” 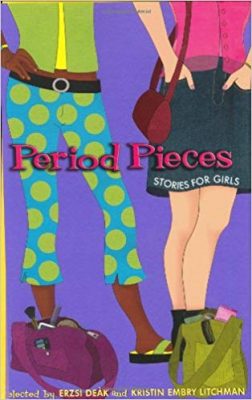 An anthology collection of short stories about girls starting their periods for the first time. CYN NOTE: People of all genders who have uteruses may experience periods. That said, this anthology is focused on girls.

PERIOD PIECES is out of print. Look for copies at libraries and used bookstores.

Children’s Literature: “Others will laugh at the total embarrassment of Linda Sue Park’s girl in the white pants or feel a touch of relief at Cynthia Leitich Smith’s ‘Gentleman Cowboy’ whose many sisters taught him how to treat a girl.”

Kirkus Reviews: “Cynthia Leitich Smith tells of the kindly cowboy, barely older than she, who rescues her from fear of heights on horseback and from being caught on said horse with no supplies or nearby bathroom.”

Booklist: “Whether or not they have experienced the arrival of their first ‘George,’ ‘Auntie,’ or ‘Dona Rosa,’ girls will enjoy these stories—funny and self-deprecating, frank and reassuring—which may encourage them to shed embarrassment and take ownership of their bodies.”