Have you ever felt two different ways about the same moment? What was that like?

Rain describes the hug with Mama and Galen as her “safest memory.” What makes it so safe? How does this moment frame the rest of the novel? What is your safest memory? What made it so special to you?

According to the driver of the volunteer fire truck, Galen ran right into the road without looking for oncoming traffic. In the chapter Tasty Freckles, were there any hints that Galen sometimes acted recklessly? What about in the journal entry to this chapter? 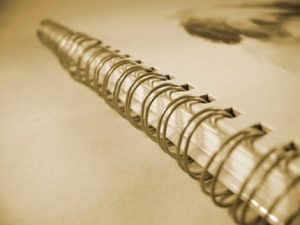 Read a couple of the journal entries, and then a paragraph or two from the narration. How is Rain’s writing, or journaling, voice different than her regular one? What do the journal entries add to your understanding of Rain’s character? Does the journaling itself seem to help her move forward with her life, and if so, how?

Symbolism is a tool writers use so that one thing represents someone or something else. Who or what does the chapter title Broken Star symbolize and why? Can you think of another example of symbolism in the novel?

It astounds me that there are people out there struggling with whether they should let their children read, say, CHARLOTTE’S WEB by E. B. White (HarperCollins, 1952) because the spider dies (or because she’s a single mom, but that’s another essay).

Many of the best stories published—including one of my all-time favorites, BRIDGE TO TERABITHIA by Katherine Paterson (HarperCollins, 1977)—lead up to the death of a character. One of the best things about this format is that it offers readers a chance to really get to know the character, to care and grieve. Usually, these novels end shortly after the death, usually with some sign of hope or healing for the protagonist who is left behind. I love these stories, but in RAIN IS NOT MY INDIAN NAME, I wanted to explore what happens next. But let me back up to the day this story first began.

I was fifteen years old, a sophomore. It was the first weekend of the school year, and I’d just become a junior varsity cheerleader—something that seemed momentous at the time. As one of my first cheerleading duties, I accompanied two of my squad mates to a cross-country meet at a high school across town.

After crossing the finish line, one of the boys on the team suffered heart failure and died shortly afterward. The boy was a year older than me, and I hardly knew him at all. But I found myself haunted by that memory.

Back then, counselors reach out to students after a death. For the most part, we were left to make sense of it or not on our own. I don’t want to say much more out of respect for this real-life tragedy, but the people I grew up with will remember and understand.

Although I had lost loved ones, this was the first time I’d known someone approximately my own age who’d died. It was my first real confrontation with my own mortality, with the idea that we could lose anyone at any time. It wasn’t news in the strictest sense, but there’s a big difference between knowing and fully appreciating that knowledge.

What I always wondered is how people could go on after the loss of a young person, someone whose death doesn’t seem part of the circle of life. I struggled with the idea of all that lost potential. Yes, I could see a moment of hope afterward. What was hard for me was imagining every day and month and year afterward.

During the course of writing this novel, my grandfather and uncle as well as my father’s best friend were diagnosed with cancer. All three have since passed away. For me, the loss of my grandfather was the hardest, not because I didn’t love the other two, but because Grampa had always been such a large part of my daily life. He was probably the only person whose love I never once doubted at all. The fact that his death happened after a long and productive life didn’t lessen the blow. Losing someone you love is hard no matter the circumstances.

I’ve had people ask me why I would write a story about the death of a teen. The theory is that if you don’t talk about it, death won’t be real. That young people can be protected. But that’s a lie. Death is real. Stories like this one are needed, so that readers going through grief will feel less alone. So that readers who haven’t yet experienced grief will be better prepared to cope with it.

But the heart of RAIN IS NOT MY INDIAN NAME isn’t about death. It’s about healing. After the first two chapters, the story picks up in a third titled Six Months Later. Essentially, Galen’s sudden death reconnects Rain to her grief over the loss of Mama. The challenge from a writing standpoint was that even though the story began six months after Galen’s death and several years after Mama’s, both of these characters still played a role in Rain’s story. Their voices need to be heard, and Rain needs to process her past with each of them.

But these are not the only absences she has to deal with. Rain’s father is an Air Force officer stationed in Guam, and for the majority of the story, she’s not speaking to her beloved best friend Queenie. By incorporating journal entries, I was able to show more of these two important but deceased characters as well as to offer some insight into Rain’s relationships with her distant dad and estranged friend.