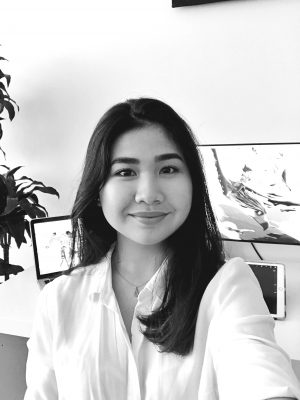 Today’s post is an interview with Jane Pica, the illustrator for The Second Best Haunted Hotel on Mercer Street (Amulet, Aug. 18, 2020). She is responsible for the gorgeous cover and the interior illustrations.

This is the first book I’ve ever done that was partially illustrated–having an illustrator on the team was an amazing experience. Seeing my characters brought to life visually was truly indescribable! I thought it would be fun to interview Jane and find out a little bit more about her process.

Have you always known you wanted to be an illustrator?

I’ve loved drawing since I was little. I would daydream about getting a job where I could draw pictures all day, but being a kid growing up in the Philippines, animation and children’s publishing did not seem to be a stable career, especially to my parents, so I thought it wasn’t something I could consider for my future.

Years later, I went to college. I joined a student publication and worked at the art department as a sort of escape from academics. It was the first time I’ve seen my art on print. My friends were very supportive, even asked me to sign a few pages with my illustrations, and the best part was I got paid for my art! It was such a great feeling and it made me reconsider my interest in illustration.

How did you learn (and how to do you continue to improve upon) your craft?

Art school wasn’t really an option for me a couple of years back. I try to learn with whatever resources I could find through books or the Internet.

One of the best advice I got from my art director back in college was: Try to draw every day. Always keep a notebook in your bag, even on your bed. The more consistent you are, the better. It helped me fight those occasional art blocks and develop my style.

What is your process when you’re first reading a story and starting to think about how to illustrate it?

I read the story first and jotted down notes about my first impressions of the characters and possible references.

What is your preferred medium? Are you more traditional or digital?

Digital. For me, it’s convenient, far less messy, and I noticed significant improvement since I switched from traditional. But I try to draw on paper from time to time just because I like the sound of scribbling on paper, it’s kinda relaxing.

Can you tell us about your storyboarding process?

I usually start with messy sketches, at least two layers of scribbling before I get down to polishing the line art. Sometimes I just get lost in it. I end up with ten layers just for a draft sketch!

I should tell you that I’ve been totally blown away by your sketches for the book – I cried when I first saw them! Seeing the characters from the book portrayed in such a loving and beautiful way was incredibly moving. How do you achieve such realistic emotion in your characters’ expressions? Do you use models? Your imagination? Some combination of the two?

Thank you! Character expressions and gestures is something I love to do, and getting to know the characters of The Second Best Haunted Hotel really was a treat.

I’m a bit embarrassed to admit I actually have a small mirror on my work desk so I can use my reflection as a reference for certain expressions. Sometimes I’d wonder why my face feels a bit weird and realize I’ve been scrunching my brows or nose too long!

What was your favorite part about illustrating The Second Best Haunted Hotel on Mercer Street?

I love the part where the Ivan staff dressed in their costumes, especially Pierce. I thought it was really fun to draw him out of character and it was a fun piece overall.

Is there anything you wish people knew about illustrators in general?

My biggest peeve is re-posts/art theft. I’ve met a lot of illustrators who’ve benefited in the influence of social media just as I did. I hope people realize that when you re-post without credit to the artist, it’s not just the art that they are stealing, but also any possible career opportunity they might get through that exposure.

What is the best way for people to contact you?

I don’t usually answer to direct messages on my social media. The reason is that I receive quite a few messages from non-mutuals who won’t say why they sent it, as if forcing me into a conversation and that makes me uncomfortable, so I tend to ignore them altogether. I answer through email (jane dot pica97 at gmail dot com).

What are your social media handles?

Next up: Debut author Adrianna Cuevas shares her spooky inspiration. In case you missed it, in Part 1 of this series, Cory Putman Oakes discussed crafting spooky stories.

Jane Pica grew up with a pencil in her left hand and a piece of paper in the other. As a child, she practically absorbed every cartoon and fairy tale she could find and would draw as if each stroke of a pen brings the characters to life.

She finished her bachelor’s degree at the University of Santo Tomas, Manila, Philippines. A year after graduating, she moved to Dubai and continued working as a freelance illustrator.

An avid tea drinker, Broadway and Disney fan, Jane’s art is deeply influenced by the animated classics. She loves to draw characters that radiate personality through expressive lines and fluid body poses, which she enjoys drawing best with a Broadway musical soundtrack playing in the room and a hot cuppa on her desk.