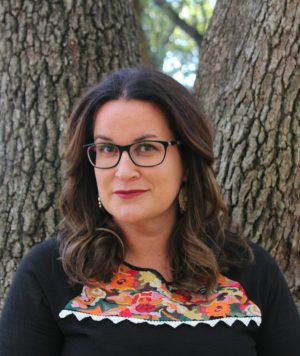 Welcome to Day 3 of my Cynsations Spooky Middle Grade Takeover!

Today’s post is an author interview with fellow spooky middle grade writer, Adrianna Cuevas. Adrianna’s debut novel, The Total Eclipse of Nestor Lopez (FSG), comes out May 12. It’s now available for preorder. I’m so happy she agreed to geek out with me over our mutual love of spooky stories.

If young readers are anything like me (and given my continued delight in fart jokes, I think they might be), they respond strongly to a story that keeps you guessing and turning the page.

Scary stories make you wonder what might be around the corner, leaving you both eager and nervous to find out! That tension makes for an engaging tale.

Huge congrats on your debut middle grade, The Total Eclipse of Nestor Lopez! Can you tell us a little bit about the book?

My book is about a boy named Nestor who moves in with his abuela after his dad’s latest deployment to Afghanistan.

He plans to lay low, and he definitely doesn’t want anyone to find out his deepest secret: He can talk to animals.

But when pets and cattle in Nestor’s town start disappearing, Nestor investigates and finds that they’re being seized by a mysterious creature whose power grows during the solar eclipse.

And the next eclipse is just around the corner… dun dun dun!

I’d love to hear more about the tule vieja. What kind of research did you do to bring this character to life?

The legend of the tule vieja comes from Panama and Costa Rica, two countries I lived in when I was younger.

The witch that terrorizes Nestor’s town is a little different than a traditional tule vieja.

While Nestor’s witch can turn into various animals by biting them, the Panamanian and Costa Rican tule vieja takes on a permanent half-woman, half-bird form. She has short bat wings sprouting from her back, and sharp hawk talons take the place of her feet. She wanders through towns at night, searching for her lost children, much like the Latin American tale of La Llorona.

I wanted a villain that was associated with animals in order to tie in Nestor’s ability, and the tule vieja fit the bill perfectly.

What about your book—and about Nestor as a main character—do you think will appeal to middle grade readers?

Middle grade readers are at an age where they’re beginning to assert their own independence yet are still subject to the decisions and whims of their elders.

Nestor embodies this in the fact that he’s had to move so much as part of a military family but really just wants to find a place to truly call home.

I think young readers will relate to a main character who’s trying to find his voice and stand up for himself. And Cuervito—he mischievous raven who likes to poop on bullies and give Nestor incredibly bad advice—will give them a chuckle, too.

Do you read a lot of spooky and magical books (or did you read them when you were a kid)?

Now, if someone will just write the middle grade equivalent of “Train to Busan,” my favorite Korean zombie movie, I’ll be happy!

Ghosts and goblins aside, there’s a lot of real scary stuff going on in the world today. Do you think that spooky stories can help kids better deal with the scary things in their real lives?

Scary stories showcase people forced to make basic decisions for their survival, often revealing their true character. Reading about these situations can be a vehicle for introspection as kids wonder what they would do in a similar situation.

Whether a character is battling witches or ghosts, they have to find their voice, fight for what they believe in, and learn that it’s okay to ask for help.

These same skills apply to real world issues as well.

Scary stories are also a great escape. When the real world is overwhelming, diving into a land of creepy crawly things—and seeing them defeated—can be just the relief a young reader needs to believe their own shadows can be devoured by the light.

Are there any other books (spooky or otherwise!) coming out this year that you’d recommend for middle grade readers?

Fright Watch: The Stitchers by Lorien Lawrence (Amulet) is a middle grade horror that comes out in August.

Finally, The Girl and the Ghost by Hanna Alkaf (HarperCollins) is based on Malaysian folk tales and also comes out in August.

Sounds like it’s going to be a spooky summer!

Do you have any other thoughts on spooky books and why they’re the best?

Spooky tales let a reader’s imagination run wild! There are no limits to the scary things you can imagine in a dark tale…and the tools you can give your characters to overcome them.

I love how spooky stories make my heart race, but I especially love seeing characters triumph over what was threatening them.

Adrianna Cuevas is a first-generation Cuban-American originally from Miami. A former Spanish and ESOL teacher, Adrianna currently resides in Austin, Texas; with her husband and son.

When not working with TOEFL students, wrangling multiple pets including an axolotl, and practicing fencing with her son, she is writing her next middle grade novel.

She is represented by Stefanie Sanchez Von Borstel of Full Circle Literary.