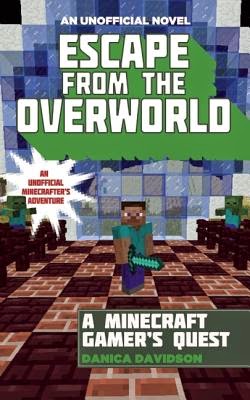 Danica Davidson is the first-time author of
Escape from the Overworld (Skyhorse, 2015). From the promotional copy:

Eleven-year-old Stevie, who comes from a long line of Steves, doesn’t feel as if he fits in the Minecraft world. His father is great at building and fighting off zombies, but Stevie struggles in these areas.

One day, when Stevie is alone in the field trying to build something new that will impress his dad, he discovers a portal into a new world.


Stevie steps out of a computer screen and into the room of eleven-year-old Maison, a sixth-grade girl who loves to build and create, but who is bullied and made an outcast by her classmates for not indulging in activities deemed “cool.” Stevie is shocked by how different this world is, and Maison takes him under her wing and teaches him all about her world. The two become friends, and Maison brings Stevie to school with her.


Stevie is horrified to see there are zombies in the school He realizes that when he opened the portal, this allowed zombies to also enter the new world. More and more creatures are slipping out by the second, wreaking havoc on a world that has no idea how to handle zombies, creepers, giant spiders, and the like. Stevie and Maison must put their heads together and use their combined talents in order to push the zombies back into Minecraft, where they belong.

As Stevie and Maison’s worlds become more combined, their adventure becomes even more frightening than they could have imagined.

I’ve always loved writing — I still have stories I dictated to my parents when I was three, or little notebooks I wrote in when I was so small I had to follow my mom around and ask her how to spell each word. 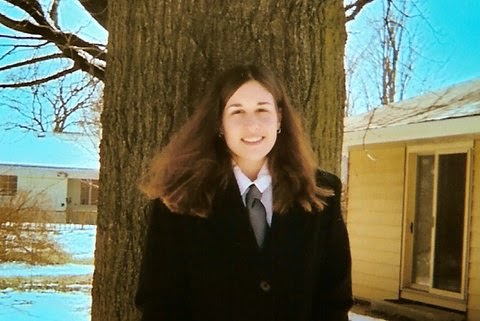 This continued on throughout the years, with me starting to write multiple novels in middle school. I like to write in a private area, usually with music playing. The music varies depending on the type of scene or book I’m writing.

For my book Escape from the Overworld, I got the contract before I’d written the book and the publisher wanted a quick turnaround of about six weeks.

There was definitely a moment of, “Six weeks – what have I gotten myself into?” But then I made myself plan.

Working as a journalist has taught me that you sit down and you write your project; if breaking news is happening, your editor is not going to care if the Muse isn’t inspiring you that day.

I’d turned in a synopsis for the book, which is what led to the contract, so I spent the next week figuring out in my head the details of the scenes. The main characters are eleven, so I reread some writings I did at eleven to help me get back in the voice. The week after that, I made myself write at least 2,000 words at day on the manuscript before taking any breaks. I wrote more on the weekend or if the words were flowing extra well that day.

In one week, I had my rough draft of about 20,000 words. I gave it to some friends to help me edit (warning them it was called a rough draft for a reason), and waited till I got their edits back before I returned to the manuscript. Once I got their thoughts, I started my revisions and I made my deadline.

There were a number of things that were important to me while writing. I know some people might be quick to dismiss it as, “Oh, it’s just a Minecraft book,” but I wanted it to be more than that.

Since I notice a lot of Minecraft books (or even just adventure books in general) are male-dominated, I made sure my protagonists are male and female and on equal footing. I take on issues like bullying and the fears of going to a new school. I made the shop class teacher female, because I know many people would unconsciously picture a shop class teacher as being male. Both the main characters are from single-parent households, since I wanted to show that’s normal for many kids and nothing to be ashamed of.

As a result of my bullying and girl-power angles, the book has been included in an anti-bullying, girl-empowerment program called Saving Our Cinderellas that aims to inspire young girls of color in cities around the country. I want the book to be fun — I end almost every chapter with a cliffhanger for a reason — but I also hope it can inspire young readers and touch them emotionally as well. It’s my goal to write all different types of books for all different ages.


As someone with a full-time day job, how do you manage to also carve out time to write and build a publishing career? What advice do you have for other writers trying to do the same?

This is kind of a trick question for me, because writing is my full-time day job, but it’s journalism.

I realized that wasn’t going to work, so I started out smaller, writing for local newspapers. Once you’ve published things professionally, other places will take you more seriously. I would take samples of my published work and send them to bigger and bigger places.

My interest in anime and manga had me writing about the subject for local papers, and then I used that to get me in Anime Insider, which led to Booklist, Publishers Weekly, CNN, The Onion, Los Angeles Times and other places. (I know this sounds really quick, but I can tell you it actually took years, and I got many rejections in the meantime.)

I even found opportunities to write the English adaptation of Japanese graphic novels for the publishing company Digital Manga Publishing.

At first I was working other part-time jobs to supplement my income, but within a few years I became a full-time writer. Every single day I wrote articles and sent out more submissions.

I began to be known as an expert on manga and graphic novels, and this led me to writing for MTV, which at the time had me reporting on superhero comics being made into movies. I love writing for MTV News, and now I cover social justice issues for them, which means I write about things like philanthropy, activism and advocacy with causes that matter to young people. I was part of a small group of MTV writers to receive a Webby Honor for Best Youth Writing.

All of this helped me hone my craft, get my name out there, and pay the bills.

When I got my agent not long ago, he was very impressed to see a twenty-something who’d sold more than a couple thousand articles to big-name places.

Then while he was shopping around a YA series of mine, Skyhorse Publishing approached me, wanting a manga art guide. Of course I was thrilled and grateful! Next they asked me if I could write some sort of Minecraft book, which led me to pitch Escape from the Overworld. The manga book will be out soon, and I just finished my rough draft for my sequel to Escape from the Overworld, which has the planned title Attack on the Overworld.

I still haven’t been in “The New Yorker,” but that’s okay.

One thought on “New Voice: Danica Davidson on Escape from the Overworld”