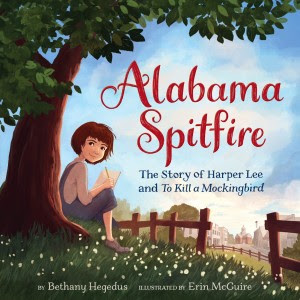 Just about a year ago, I became a Writing Barn Fellow, which means I serve as a teaching assistant and provide logistical support for classes and workshops.


It also means that I’ve gotten to know author Bethany Hegedus better and I couldn’t pass up the chance to interview her about her new picture book biography, Alabama Spitfire: The Story of Harper Lee and To Kill a Mockingbird, illustrated by Erin McGuire (HarperCollins, 2018). From the promotional copy:
Nelle Harper Lee grew up in the rocky red soil of Monroeville, Alabama. From the get-go she was a spitfire.

Unlike most girls at that time and place, Nelle preferred overalls to dresses and climbing trees to tea parties. Nelle loved to watch her daddy try cases in the courtroom. And she and her best friend, Tru, devoured books and wrote stories of their own. More than anything Nelle loved words.

This love eventually took her all the way to New York City, where she dreamed of becoming a writer. Any chance she had, Nelle sat at her typewriter, writing, revising, and chasing her dream. Nelle wouldn’t give up—not until she discovered the right story, the one she was born to tell.

Finally, that story came to her, and Nelle, inspired by her childhood, penned To Kill a Mockingbird (1960). A groundbreaking book about small-town injustice that has sold over forty million copies, Nelle’s novel resonated with readers the world over, who, through reading, learned what it was like to climb into someone else’s skin and walk around in it.

What drew you to Harper Lee? Did you feel a kinship with her?

To Kill a Mockingbird was and is my favorite book. I read it over and over, each summer, for about 20 years.

In my childhood mind, Scout was Beverly Cleary’s Ramona, set in a different time—and I wanted to be both of those girls. And in some ways I was: outspoken, an ally, a questioner—but even though I grew up in the ’70s and ’80s I missed out on pageboy haircuts both Scout and Ramona don.

I always wanted to write about Harper Lee. I read anything and everything that came out about her—which wasn’t much—since she chose to live a very private life.

I first became interested in her as a subject because of learning about the parallels to who she was a child and who Scout was.

Nelle, which was the name Harper Lee was born with and that family friends still used, knew that childhood was a time of exploration– moral discovery internally—as well as learning about the outside world. That fascinates me and continues to fascinate me.

I lived in New York City during some of the years Harper Lee lived there, before returning home to Monroeville for good. I used to imagine bumping into her as I once did my mentor Norma Fox Mazer in Grand Central. I never bumped into Harper Lee—but the imaginary conversations we shared over cups of black coffee still do.

What were the challenges (literary, research, psychological, logistical) of bringing the text to life?


The challenges are always numerous when beginning a picture book biography and here I knew I was not going to have any first-person sources since Harper Lee did not grant interviews and stopped speaking about her enormously successful novel in the 1960s before I was born. 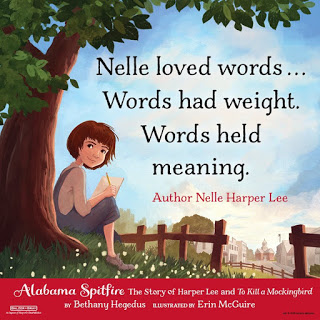 After Nelle’s passing, we went back into the manuscript and edited the ending to include the death and the publication of Watchmen.

I wasn’t Harper Lee’s friend but as a long lover of her work, I felt a connection to both her fiction and her desire to leave the South, but also stay connected to the South. Psychologically, this helped me dig into her life’s story and to find the arc of a writer who “lived a life of her own design.”

I’ve heard you call yourself an “accidental biographer,” can you explain that and tell us about the threads of connection in your nonfiction books?

Yes! I am an accidental biographer—one who writes novels—and had two published and hopefully more soon—so I feel strongly rooted in story, not research. 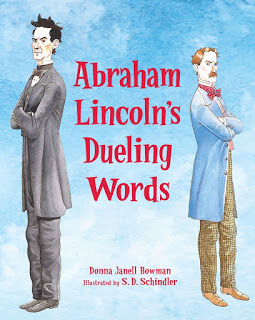 My hat always goes off to the real researchers. Folks like Donna Janell Bowman and Cynthia Levinson, who are friends and whose work astounds me.

But being an accidental biographer, has come to mean this to me, and I teach this when I teach biography; my flawed and beating heart needs to overlap somehow with the subject I am researching and sharing. We have to have a heart connection. And in telling their life story in book form, I am also subtextually telling my own life story.

I am not a journalist. I don’t believe in being impartial and removed from the subjects I am writing about.

But, notice the word subtextually…while my heart, and my writer heart, may find common ground with my subject I am not making things up, or inserting myself into the story, but I am psychologically there—just as I am with my fiction. Voice, word choice, scenes to depict, narrative arc—those are all decisions innately made or consciously decided by me the author.

I said it this way in an editorial letter to one of my picture book biography mentees:

And what I am attempting to do with picture book biography is take someone who has lived a day, many days, many years, and to find their through line and to tie it to mine, with where I personally need to grow or heal or with what I want to offer and give to the world. I am the centerpoint. And I believe where the throughline begins is by seeing where the author may make his or her connection.

In fact, this personal desire to heal is where my desire to create non-fiction started. 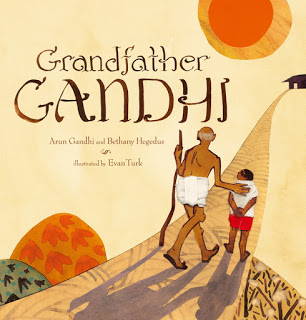 I heard Arun Gandhi speak a month after 9/11, where I was a fire searcher on the 31st floor of World Financial Center, where I worked as a receptionist, a writing receptionist.
I witnessed all there was to witness that day and I went to Arun Gandhi’s talk hoping to heal myself. And his talk did heal me. And in hearing him speak about the two years he lived with his grandfather at the Sevagram ashram in India I knew I wanted to share his stories with picture book readers.
Arun’s story and mine intersected when I heard his words. About how his grandfather taught him how anger is like electricity and it can be destructive when reactive like lightning but if channeled and transformed it can shed light like a lamp. About how his grandfather, the Mahatma, believed we were all one and how each of us could make a difference in the world, by being the change we wished to see.

How does being the Creative Director at The Writing Barn and teaching classes inform and influence your work as an author?

I think one of the secrets to being a productive and prolific writer is you never stop learning and when you couple that with community—wow—the learning intensifies.

It is a gift to get to create programming for writers all over the country, and to create opportunities for their craft-tool boxes and living a literary life skill sets to grow and grow.

And when I am teaching myself, it’s like school visits—it may take a ton of energy and time—but what I get out always inspires me. Even with the busyness around Alabama Spitfire, I’ve carved out the time to teach a half-day on-line class: Uncovering the Narrative Arc in Picture Book Biographies in mid-March to keep me engaged and that always means headed back to the page.

Tell us what you’ve got coming up at the Writing Barn that you’re most excited about.


Gosh, I am loving our online programming, which has allowed writers who have flown into Austin to study with us at intensives, the chance to do it again—now from home. Or for Austinites who don’t want to brave the traffic. This also allows us to work with artists from around the country: the amazing YA author Melanie Crowder, funny man Adam Lehrhaupt who is teaching an outside-the-box six-week picture book class, and more.

Intensive-wise, Lamar Giles, A New York Times bestseller who has a middle grade  book coming out on Kwame Alexander’s Versify imprint is heading the Mastering the Middle Grade faculty with Phoebe Yeh, who heads up Crown this May.

And in fall, we have our Complete Picture Book Biography Intensive with Alyssa Eisner Henkin (RJ Palacio’s agent) who is actively seeking picture book bios. And we are super excited to have our inaugural Rainbow Weekend Intensive for writers on the LGBTQIAP+ spectrum. 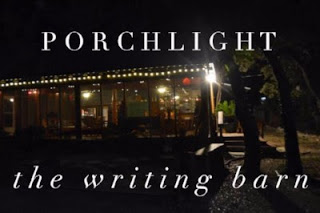 And we launched our Write. Submit. Support. Six-month programs and those will be ongoing with the next set beginning in this summer for both picture book writers and novelists.

Can you tell us about the other books you have coming up?


You have to sit on announcements as a picture book biographer for so long. I have one I still can’t publicly chat about that is also set to release in 2019, but here is info on the one I can talk about.

A picture book biography of my childhood President, Jimmy Carter!

And I’d like to thank the kidlit communityfor participating in the #BeASpitfire campaign where each Tuesday we post a video featuring a kidlit creator doing extraordinary work with kids! 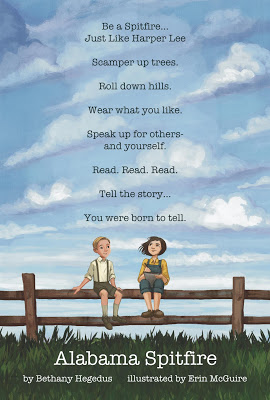 
Publishers Weekly called Alabama Spitfire, “an affectionate ode to a writer who ‘carved out a life of her own design,’ as Hegedus eloquently puts it.” 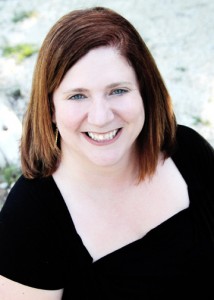 Bethany writes about the South in her picture book Alabama Spitfire: The Story of Harper Lee and To Kill a Mockingbird and her middle grade novels Truth with a Capital T (Delacorte, 2010) and Between us Baxters (West Side Books, 2009).

Her novels are known for gracefully handling issues of race, class, and cross-group friendships.

A graduate of the Vermont College of Fine Arts MFA program in Writing for Children & Young Adults, Bethany is prior editor of the literary journal Hunger Mountain. She is the owner and creative director of The Writing Barn, a writing retreat, workshop and event space in Austin, Texas.