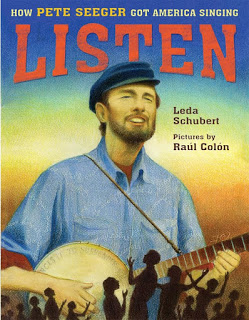 Listen.
There was nobody like Pete Seeger.
Wherever he went, he got people singing.
With his head thrown back
and his Adam’s apple bouncing,
picking his long-necked banjo
or strumming his twelve-string guitar,
Pete sang old songs,
new songs,
new words to old songs,
and songs he made up.


This tribute to legendary musician and activist Pete Seeger highlights major musical events in Mr. Seeger’s life as well important moments of his fight against social injustice. From singing sold-out concerts to courageously standing against the McCarthy-era finger-pointing, Pete Seeger’s life is celebrated in this bold book for young readers.

What was your initial inspiration for writing Listen?

I had no intention of writing about Pete–until that very sad morning when I found out he had died.

Nobody lives forever, but I hoped Pete would beat the odds. I couldn’t stop crying, and before I knew it, I had started a picture book about him. Writing as a way to understand and process sadness and loss? I should have known.

What were the challenges (literary, psychological, logistical) in bringing the text to life?


First, Pete lived such a long life. Second, he did enough to pack into 50 lifetimes. Third, was he really as flawless has he seemed? And more.

How could I find something fresh to say, deal with McCarthyism in a picture book, and craft it for a child audience? What compromises would I have to make, if any? What would I leave out? How can music be expressed in words?

Including the song titles is pretty brilliant. Was that how you envisioned it from the beginning, or did that evolve as you worked on the project?


Ha. I wanted to include the beginning two lines of 14 or 15 different songs. I very carefully chose
songs that would reflect each section. 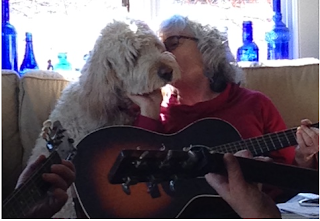 Here I wanted to include the lyrics to ‘Hobo’s Lullaby’: “Go to sleep you weary hobo/Let the towns drift slowly by.”

Or, another example: “Pete said, “I love my country very deeply,”/offered to sing a song,..”

Here I wanted to include the beginning of that song: “Wasn’t that a time, a time to try/The soul of man; wasn’t that a terrible time.”

I contacted the copyright holders early on, which began a year-long (!) discussion about getting the rights. Eventually, I received permission from the family, but then learned that the permissions would be prohibitively expensive.

Lesson: don’t try to incorporate song lyrics in your work. I realized we’d have to go with the song titles instead.

From there, it was in the extremely capable hands of Neal Porter (the editor), Raúl Colón (the illustrator), and Jennifer Browne (the art director). They decided to use the blue font, which I think was a brilliant decision.

What sort of research did you do?


What sort didn’t I do?  I am a research addict, and I have become over time probably the world’s best researcher. I am a naturally modest if not completely self-effacing person, but I make this claim with confidence.

So the research I did was basically to read everything that had ever been written by or about Pete and to watch videos and listen to everything he sang (almost).

Fortunately, I already knew a whole lot about Pete’s life. The problem I have with research is stopping.

Did you ever meet Pete or see him perform in person?


I did not exactly meet him, but I did shake his hand on two occasions and tell him how much he meant to me. I mention this in the notes. I was also very fortunate to see him many, many times, in concert, at folk festivals, and on pickets lines and demonstrations.

What do you hope readers take away from Listen?


I hope young readers want to listen to Pete’s music, learn more about him, and change the world as Pete did. Or at least change where they live. Pete said, as I quote in the book, “If anybody asks you where in the world is the most important place,/ tell them, right where you are.”

And I hope knowing his story will lead readers to sing more, especially with others. There’s nothing like four part harmony rising to the rafters and drifting to the stars (apparently I now quote myself.).

Also, I hope that readers will go out and buy tons of copies of the book. Then everyone will know about Pete.

In my journal from when I was 16, I had two wishes (other than falling in love, losing weight, having lots of dogs, etc.): to write for children and to live in Vermont.

I achieved the Vermont part in my early twenties, but it took me about thirty more years to get to the writing part. In between, I was lucky enough to always work in some way or other with children and books.


All the usual stuff: write, read, stay tuned in to the world.

But also this: read with children. Experiencing how children respond to your favorite books can be a mixed blessing, but worth it. And be a force for good in the universe!

Kirkus Reviews gave Listen a starred review. Peek: “Schubert and Colón capture with affection and respect Seeger’s remarkable lifetime of speaking truth to power through music and engaging the hearts of his audiences. A biographical timeline includes a charming selection from a boyhood letter, contemplating a banjo purchase; the generous resource list includes source notes and recommended recordings.” 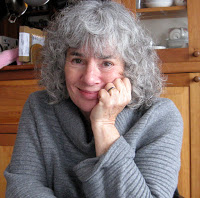 School Library Journal said “Schubert’s offering is ideal for shared reading. Verdict: Buy this book and sing your heart out!”

Horn Book Magazine described the “focus not on dry facts but on helping child readers understand his essential spirit” and “the text captures the singer’s unmistakable speaking cadence.”

She has been a teacher, a school and public librarian, and a consultant for the Vermont Department of Education, and she holds an MFA from VCFA, where she was a core faculty member as well.

She lives in Plainfield, Vermont with her husband and two dogs, one of whom is a saint and the other a sinner.