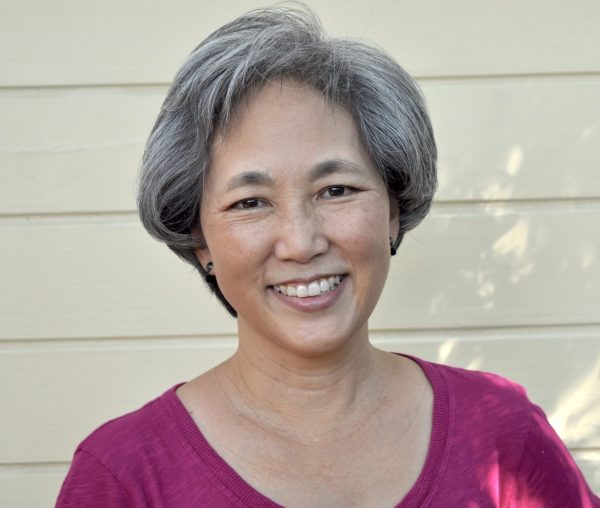 The Austin chapter of the Society of Children’s Book Writers and Illustrators (SCBWI) is particularly vibrant, and among its many offerings is a mentorship program named for Cynthia Leitich Smith!

I have been the program’s mentor twice, most recently working with the wonderful Carol Kim. In celebration of Carol’s first trade publication, King Sejong Invents an Alphabet, illustrated by Cindy Kang (Albert Whitman & Co., 2021) we sat down to chat and reflect on her journey.

Can you tell us the exciting story of this book, from idea through drafting and revision, from sale to publication?

In 2014, my father told me that he wanted to visit Korea. I was shocked. This was a man who did not enjoy traveling. But my mother (they were married over 50 years) had recently passed away, and he was inspired to get in touch with his roots. My dad had immigrated to the U.S. around 1955 and he’d never gone back to Korea to visit. Not once in nearly 60 years!

He ended up taking my family and my oldest brother’s family on a trip to Seoul and Busan. As we were preparing for the trip, my father explained that he only had a third grade reading level of Korean. He explained that King Sejong actually invented Hangeul, the Korean alphabet, in the 15th century, but it had met with a lot of resistance. Hangeul had actually only been official since 1946. I was blown away. What a great story, I thought. This would make an awesome children’s book!

It took me a few years to finally get around to writing about King Sejong. I collected some research (including a book I found during our trip to Korea), but I never “found the time” to write. Finally, in 2019, I realized I was never going to find it–I had to make it a priority. I had done some educational books by this point, and felt ready to take the next step.

But I felt I needed help–someone to push me to keep going. That’s when I came across the #PBChat mentorship. The application process involved submitting a draft and completing a pretty extensive questionnaire. I didn’t have a polished story at the time, but I revised a manuscript I had been toying with for years–not the King Sejong story but another one. Somehow I managed to be selected as a mentee–by the wonderful Katey Howes.

Around the same time, I signed up for a course on picture books with the Children’s Book Academy. (I told you I was really making an effort this time!) It was during the CBA course that I first tried to write about King Sejong and Hangeul. Between taking the course, and having Katey guide me and help polish my story, I finally had a real, working manuscript.

At the end of the CBA course, I had an opportunity to submit a pitch to a group of agents and editors. A couple of editors expressed interest in my story, so I sent them my manuscript. That led to Christina Pulles from Albert Whitman requesting an R & R (revise and resubmit). I was giddy with excitement! After a second round of revisions, Christina told me she was taking “King” to acquisitions.

Then came weeks of waiting. But the stars continued to align for me, because it was during this time I landed another mentorship. This time with the amazingly awesome Liz Garton Scanlon (that’s you)! The timing was so fortuitous for me, because I really felt I needed someone I could consult about questions concerning the acquisitions process, getting an agent, and, well, everything kidlit related!

In July 2020, Christina emailed me to say Albert Whitman wanted to publish my book!

That was a very good day!

I loved working with you during that exciting time, Carol. Can you say a little more about why the King Sejong story resonated with you, and how you knew you were the person to tell it?

As soon as I was introduced to the story of the Hangeul alphabet, I was intrigued. If you think of Hangeul as a character in a story, its life was filled with drama! Because it was so logical and largely accessible, it represented progress and empowerment to marginalized members of society. Some leaders supported it when it served their purposes. Others banned it when they saw it as a threat. Japan initially encouraged the use of Hangeul during the occupation because they saw it as a way to deter China’s influence over Korea. But later, Japan banned its use, and Hangeul became a symbol of nationalism and resistance to Japanese rule.

While King Sejong lived 600 years ago, his invention of Hangeul is still very meaningful for my own family. It represents both the struggles and fierce resilience of the Korean people through decades of upheaval and occupation by other powers. And because it took until my parents’ lifetimes to become the official alphabet of Korea, it affected them directly.

I was amazed that I had never heard the story of Hangeul. I knew it was ripe for sharing, and the importance of its history motivated me to try to get it published.

The personal connection was obviously instrumental to your journey. Do you have recommendations for aspiring writers looking for just the right subject matter of their own?

Always be curious and on the lookout for ideas. When my father shared the story of King Sejong and Hangeul with me, I remember having an intense, physical response. It was like alarm bells were going off in my head: “Attention! You need to tell this story!” I was also struck by this feeling of responsibility to make it happen–which scared me, because I didn’t know if I could actually pull it off. Not all story ideas are going to whomp you upside the head like that, but when they do, don’t ignore them!

While this is your trade debut, you have done work in the educational market. How has that work served your craft and professional development?

While I had dreamed of writing a children’s book since I was a kid, I never believed it was something I could actually pull off. I thought achieving such a dream was only for special people who had been anointed with a special sauce that allowed them to be part of a secret society.

But I couldn’t shake the desire to be an author.

Then I learned about writing for the educational market. I’d always enjoyed doing research and all the writing I did throughout my professional career was often like writing research papers. So writing educational books seemed like a good fit for me. It also didn’t feel as scary as the trade industry.

By writing educational books, I found my confidence growing. I got familiar with writing for a younger audience. It was also a great introduction into working with editors. And when my first book for an educational publisher was completed, I could call myself a published author!

Suddenly, the idea of writing my own book and getting it published began to feel more attainable.

Your journey seems very dedicated and methodical. What tips might you offer other writers based on your own experiences?

I like to tell aspiring writers that if you have this desire in your heart, then it is meant to be. In other words, believe it can happen for you! I truly believe that I finally started making progress in my journey to becoming a published author after I started calling myself a writer. Not only that, I started telling other people that I was a writer and wanted to write for kids. It was super scary and brought up feelings of imposter syndrome big time! But you have to believe in yourself first, and then things will start to open up for you.

Another big tip is one many authors will share–be persistent! I have so much admiration for writers who keep working at getting an agent and publisher despite many rejections. It is hard not to give up! I actually gave up many times myself, but I kept coming back to it, sometimes even after years had gone by. You will only succeed if you keep at it; that’s the only thing that’s guaranteed.

Finally, don’t try to do this on your own. Getting started writing for kids feels so daunting and mysterious in the beginning. Read books, take courses, and get involved in the kidlit community. And for the best support of all, get a mentor! Having the support of a mentor really helped boost my efforts and improve my craft so much. I am so very grateful!

And I’m grateful to have been one of yours! We all keep learning from each other in this field! So, Carol, what are you excited about or working on now?

This year has given me a lot of great opportunities in the educational space. I was approached by two of my dream publishers, Capstone and Lerner, for several projects. One included writing nonfiction graphic novels. When they first asked, I was pretty nervous. I had no idea how to write a graphic novel! But when a great opportunity presents itself, you need to say yes–so I did! Two of the graphic novels have been published already, and I have three more in the works. I also wrote books for the youngest audience, which I had not really done before. Those were fun and surprisingly easy to write. Altogether, I’ve written 11 books over the past year or so!

I’m finishing up the last of these now, and am eager to focus on some of my own ideas again. I have a couple of picture books that I want to finish up and submit! I’ve had my agent (the wonderful Charlotte Wenger) since August 2020, but with so many educational projects coming across my desk, we haven’t actually gone out on submission with anything! So I’m eager to experience that process, hopefully soon. Stay tuned!

We sure will. And congratulations on all your successes, especially the publication of King Sejong Invents An Alphabet! 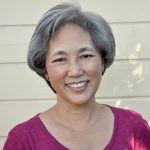 Carol Kim believes books and words have a magical ability to change the world for the better, and she writes for children with the hope of spreading some of that magic. She is the author of the picture book biography, King Sejong Invents an Alphabet illustrated but Cindy Kang as well as 20 fiction and nonfiction books for the educational market. Carol relishes unearthing real-life stories and little-known facts to share with young readers. She lives in Austin, Texas with her family. Find out more about Carol at CarolKimBooks.com and MakeaLivinginKidlit.com 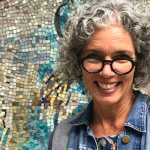 Liz Garton Scanlon is the author of many beloved books for young people, including the Caldecott Honor Book All the World, illustrated by Marla Frazee (Simon & Schuster, 2015), her most recent book, I Want a Boat, illustrated by Kevan Atteberry (Penguin, 2021), and nearly 20 others picture books and novels for middle grade readers. Liz teaches in the Writing for Children and Young Adults program at the Vermont College of Fine Arts and currently serves as their Faculty Co-Chair. Like Carol, she’s lucky to call Austin home. www.LizGartonScanlon.com