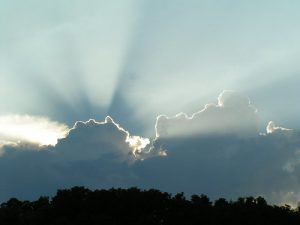 Image above: “Sunlight through storm clouds 2” by Holaday98 is licensed under CC BY-NC-SA 2.0 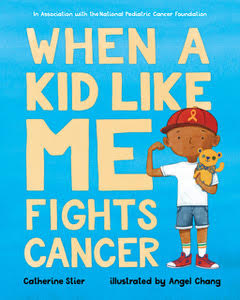 Following the publication of my picture book When A Kid Like Me Fights Cancer, illustrated by Angel Chang (Albert Whitman & Co., 2019), a reviewer stated something that struck a chord.

Safya Benniche wrote in The Lancet Child & Adolescent Health (October 2019) that in reaching out to kids facing life-threatening diseases, “Perhaps a method of communication could be through literature, where a child can identify with and relate to another child experiencing what they are going through.”

This is true, I believe, for so many tough issues kids face.

Perhaps you feel compelled to explore a difficult topic in a children’s story. After writing kids’ books about issues ranging from dealing with lice to coping with war and, yes, fighting cancer, I have these ideas to share: 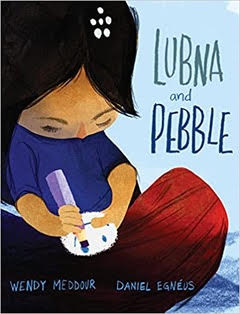 Even tiny glimpses of hope during a trouble-filled time can bring light. In the moving picture book, Lubna And Pebble by Wendy Meddour, illustrated by Daniel Egnéus (Dial Books for Young Readers, 2019), a girl, Lubna, finds herself in a refugee camp with her father.

In this “world of tents,” we sense her uncertainty. Yet the story depicts how the tiny girl grasps her Daddy’s hand and clutches a special pebble because “Somehow, she knew they’d keep her safe.”

Note that the author doesn’t guarantee safety or a happily-ever-after resolution. She simply shares the hopeful thoughts the child, Lubna, has formed for herself.

To consider: Where and how does your child character find hope in the situation?

Fred Rogers once observed, “When I was a boy and I would see scary things in the news, my mother would say to me, ‘Look for the helpers. You will always find people who are helping.’”

What a beautiful way to reframe a scary situation. What great guidance, too, for writers tackling difficult topics. 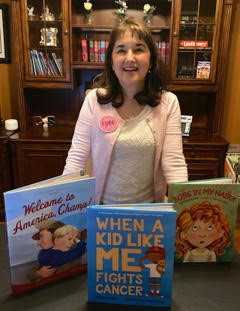 In When A Kid Like Me Fights Cancer, the child character does become aware of helpers in his corner–researchers, doctors, friends, family and volunteers. The child notes, “there are people of all ages, like the teenager who made Bowie [the child’s new, hand-stitched teddy bear], who want to help kids like me to be healthier and happier. They want to help however they can.”

To consider: In your story, can you offer glimpses of helpers in the child’s life, whether they be family, human or animal friends or the community at large?

Difficult times are invariably marked by change and loss. Illuminating the good, important things that stay the same may be comforting to a child.

While reflecting on recent changes, from losing his hair to feeling tired more often, the child fighting cancer in my book also observes what has not changed: “I can still be silly sometimes,” he states. “I still laugh with the people who love me.”

To consider: What part of their previous life can your child character hold on to? What good things stay the same?

But what a challenge for a writer! After all, what can a child character do in situations that even adults find daunting?

Curious as to how authors handled this, I conducted research at the University of Texas at San Antonio in 2013 that resulted in the article “Examining the Actions of Child Characters in Historical Fiction Picture Books” (International Reading Association’s The Dragon Lode, Spring 2014).

For this study, I examined 40 picture books set in times of war or social upheaval in the U.S. Within these books, I found dynamic characters whose action fell into several categories including (but not limited to):

• Offers/discovers new insights or understanding, or develops a new resolve
• Comforts/cheers/reassures
• Helps to build a sense of community or brings people together
• Speaks out/works against racism or discrimination 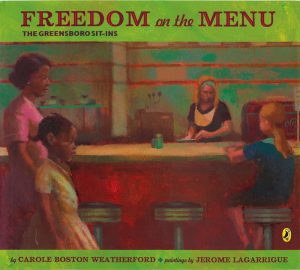 For example, in a book examined for this study, Freedom On The Menu: The Greensboro Sit-Ins by Carole Boston Weatherford, illustrated by Jerome Lagarrigue (Dial Books for Young Readers, 2005), a young girl helps her older siblings make signs to protest segregation during the Civil Rights Sit-ins in her hometown.

Regarding my own book, I knew that kids facing cancer may have limited opportunities to take action. However, I understood (from my own recent battle with cancer) that showing up for treatments and following other protocols is an act of courage in itself–and that bravery is recognized in the text.

To consider: What action can your character undertake despite the difficult circumstances? Bonus points if the action helps others.

Finally, for any writer currently crafting a story that deals sensitively with a scary situation, please know this: Your efforts may ultimately offer a child something valuable and vital—the honesty, information and reassurance that provide a light for a young soul during a dark time. 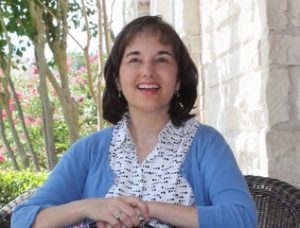 Catherine Stier is the author of several picture books about difficult topics including When A Kid Like Me Fights Cancer, as well as Bugs In My Hair?!, illustrated by Tammie Lyon (Albert Whitman & Company, 2010) and Welcome To America, Champ!, illustrated by Doris Ettlinger (Sleeping Bear Press, 2013), both named Bank Street College of Education Best Children’s Book of the Year.

Stier holds an MA in Reading and Literacy and has served as a magazine writer, newspaper columnist and writing instructor. She is a member of SCBWI-Southwest Texas.