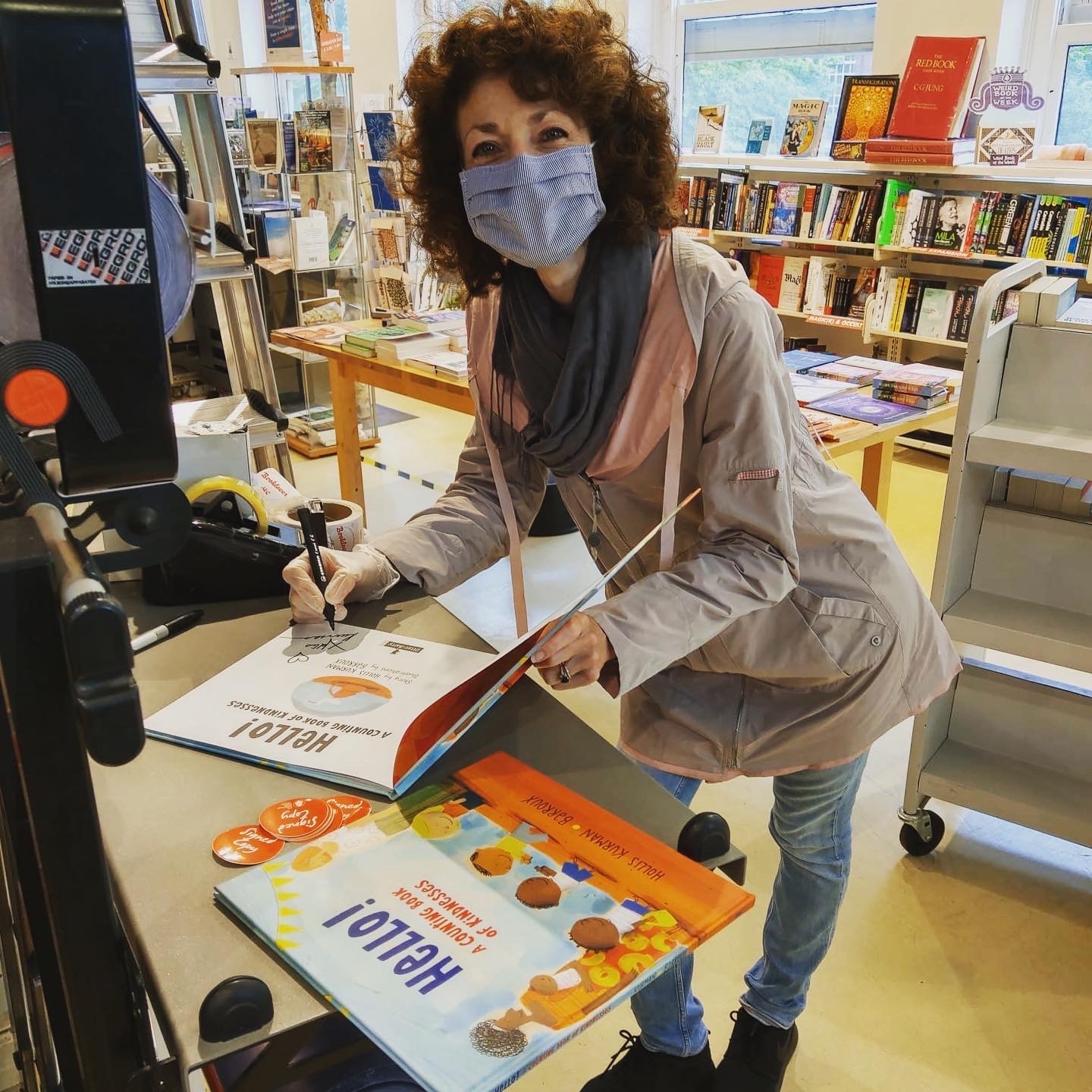 Hollis and I talked about the international aspects of her book, from the idea itself to the publication process.

You have been extensively involved with human rights organizations for a long time, and you’re also a writer. It seems that those two parts of your life intersected to create Counting Kindness, which makes the refugee crisis understandable for even the youngest children. Can you tell us a bit more about how the idea for the book was born? 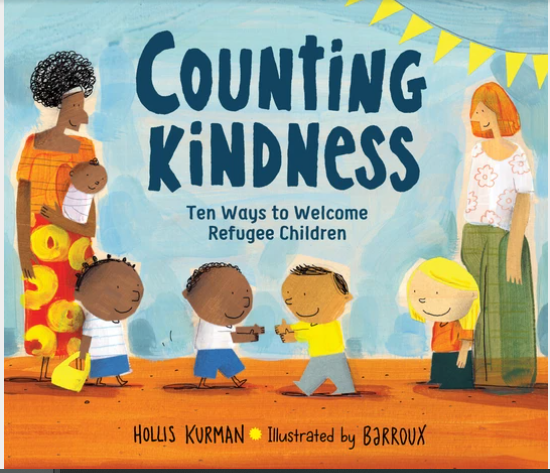 The seed was planted early. The immigrant-/refugee- story is deeply rooted in my family, as my grandparents and great-grandparents fled Europe to escape persecution and seek a better, safer life. I listened with fascination as their stories of escape were told again and again–with the difficulties they faced and their dangerous, circuitous routes to America.

Human rights were also a focus of my graduate studies at the Georgetown School of Foreign Service–and then later in founding the Human Rights Watch Committee Netherlands, joining the Save the Children Netherlands Board of Trustees, and engaging school children on these issues.

Things I care about always end up in my writing. Given my human rights background and family history, I’d always wanted to write refugee-/immigrant- stories for children.

Their stories can be difficult. But children should understand that although the world around them is not always safe or fair, it is not hopeless. And that they can make a difference with small acts of kindness, even at a young age.

My goal for this book was to find kindness and hope, even adventure, in the turmoil. While keeping it true. When I started, children’s books about refugees were hard to find–certainly for children so young–and were generally quite dark. I showed some to a Syrian refugee friend, Yara Saïd, who shook her head, saying, “We already know about the horrors.”

I told her I wanted to write a story through a more hopeful, inclusive, lens. Then one night I woke up with the counting book idea. Everything clicked into place, condensing the refugee journey into a 1-10 story: 1 boat, 2 hands, 3 meals…, 7 days of their first week…

The next morning, I showed Yara the PowerPoint I had made to illustrate it (I cannot draw!). My Counting Book of Kindnesses gave her goosebumps and brought tears to her eyes. And so, it began.

Once you had the manuscript, what was your next step towards publication?

I fine-tuned the text, updated the facts, and shared the story with readers of different nationalities. I researched publishers, wondering whether the book was fiction, nonfiction, or in a category of its own. I shared it with Rosemary Wells following an SCBWI critique session, and her enthusiasm meant a lot.

The breakthrough came when I sidestepped submissions conventions and contacted Amnesty International in February 2018, given the book’s human rights theme. I knew Amnesty had a wonderful books division, but I couldn’t find any channel to submit work–so I tried the Contact Us tab on their website.

It worked! Amnesty responded the next day, Friday, to ask for the manuscript. Saturday morning I submitted it to Nicky Parker, Amnesty UK’s Books division head, and got a positive reply by Monday: They were keen on the book but aren’t publishers themselves, so they sent me a list of recommended ‘ethical publishers’ and wished me luck.

From that list, I immediately picked out Otter-Barry Books and hoped that they would pick me, too. Luckily, they did. A few months later Barroux came on board, waved his magic illustrator’s wand, and brought the book to life.

How long was it from that moment in the middle of the night when you realized that a counting book was the way to frame the story to the book’s release?

It felt like forever!  But I have learned that the world of children’s book publishing is a marathon, not a sprint. I started taking notes for a refugee story back in October 2016. I had my counting book dummy presentation (after that middle-of-the-night eureka moment) by early 2017, and the book was released in mid-2020. That’s over three years.

How many countries has the book been released in, to date? Can you tell us about your involvement in the foreign rights process for this book? 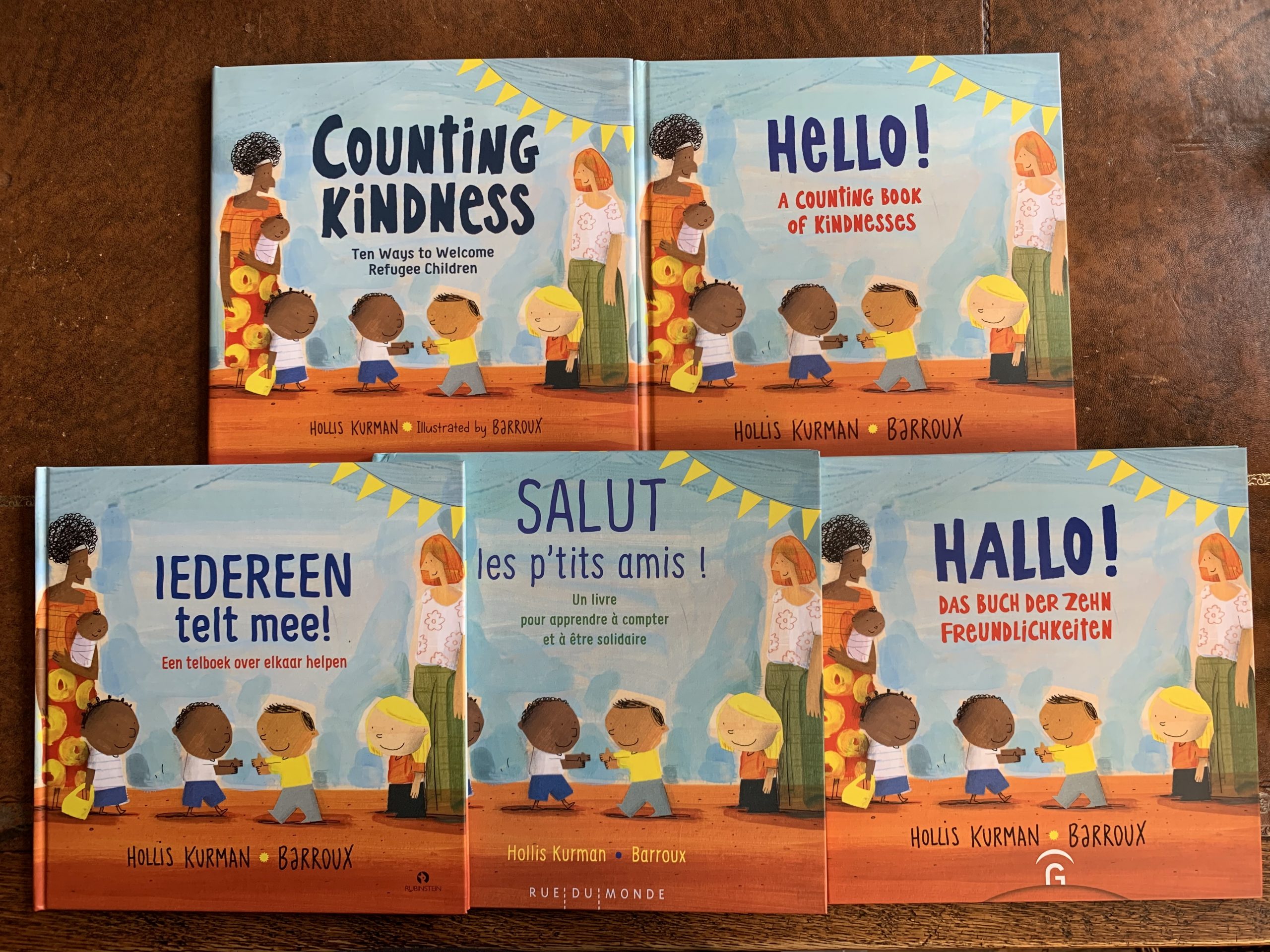 So far, the book has been released in six countries (in order: France, The Netherlands, UK, Australia, New Zealand, U.S.). Two more countries, Germany and Italy, postponed the release until early 2021 because of COVID-19. And several new countries are under discussion. It has been translated into six language versions, and I hope the book will be published in Spanish and Arabic at some point.

With foreign rights, I was most directly involved in connecting with Uitgeverij Rubinstein in The Netherlands. They are a publisher I already knew and loved, and it helped that I could present the book and background to them in Dutch at the Bologna Book Fair last April.

Otter-Barry Books has also been wonderfully collaborative and open with me on international publisher choices, and I’ve been thrilled with their choices so far.

Then came the translations. Unexpectedly for a counting book, the tight structure and spare, active language were a bit tricky to translate into other languages (including from U.K. English to U.S. English!).

I speak four of the languages the book is coming out in, which is a blessing and a curse for translations. There’s a temptation to get overly involved in the editing. I worked most closely with Rubinstein and Charlesbridge on translating and editing, which was exciting.

I already described how I reached out to Amnesty by knocking on their virtual back door. For the Human Rights Watch endorsement, I sent an early version of the book to HRW Executive Director Kenneth Roth, who I know well from all my years in the HRW Committee and other roles. He loved the book and agreed to write an endorsement blurb, as did Petra Katzenstein, Children’s Museum Director at the Jewish Historical Museum in Amsterdam.

When the book was published, I sent copies to key human rights organizations and am sending copies to refugee/asylum centers in The Netherlands. The reaction of Pim Kraan, CEO of Save the Children NL (where I serve in the Board of Trustees), was especially moving. He quoted Save the Children founder Eglantyne Jebb, saying, “Children are always the main victims of conflict” and that the book touched him personally.

He concluded, “The book reflects that feeling… At the same time, it provides tools for how you can support as individuals and make an important difference, even if the collective fails… Indeed, everyone counts” (referring to the Dutch title Iedereen Telt Mee!).

I hope the book will start conversations and make a difference, however small. International reactions from readers and reviewers so far have been heartwarming. 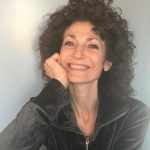 Hollis Kurman is a children’s writer and poet. Her début picture book, Counting Kindness: Ten Ways to Welcome Refugee Children (Charlesbridge, U.S.)/ Hello! A Counting Book of Kindnesses (Otter-Barry Books, U.K.) will be published in eight countries in 2020-2021, with an endorsement by Amnesty International. The book is illustrated by Barroux.

Counting Kindness has just been nominated for the Kate Greenaway Medal 2021 in the UK and has won the Northern Lights Award for 2020 in the Concept (Counting) Category in the US.

Hollis is a member of the Society of Children’s Book Writers and Illustrators (SCBWI) and alumna of many writing workshops and conferences at SCBWI, The Southampton Writers Conference, and the Highlights Foundation.

In addition to her writing, she is Chairperson of the Ivy Circle Netherlands; member of the Supervisory Board of the Fulbright Commission Netherlands and Board of Trustees of Save the Children Netherlands; Founder of the Human Rights Watch Netherlands Committee and member of HRW Women’s Rights Advisory Council; and contributing Editor on the Board of Barrow Street Books.

Hollis was born in NYC but lives most of the time in an old canal house in Amsterdam with her family and two oversized cats.  She can be found online at https://holliskurman.com, on Instagram at holliskurman_writer, and on Twitter @HollisKurman.