“Quintero: My situation with Zeke is unique in that [unlike most author-illustrator collaborators] we communicate throughout the whole process. He’s a really amazing editor.”

“Peña: I’m treating Isabel as the director, as if she were making a film, and I’m trying to serve her vision.”

“…these are the facts, and I believe young people—many of whom will be voting for the first time in 2020—deserve to know them. That it makes adults uncomfortable is irrelevant. I serve young readers. I don’t want to coddle grownups.”

“When I was out with my visibly foreign father or my hijabi family members, the reception was noticeably different to what I’d get when out alone with my Barbie-esque mom.”

“Great dialogue goes on around us all the time. I take notes—on the bus, in class, at the grocer’s, at religious services, at movies, in restaurants, on campus, and in coffee shops. You cannot make up stuff this good.”

“God is patterned after Dave Chapelle’s sarcastic wit…I can explain! One of the themes in The Voice In My Head is opening up our minds to a new concept of God… I wanted to create the kind of God I’d want to talk to.”

” Read. That’s the single best thing an aspiring writer can do for his or her work. I once heard an editor say, ‘Read a thousand books of the genre you’re interested in. Then write yours.'”

The Uses And Misuses of Mentor Texts from Lyn Miller-Lachmann. Peek:

“While I’ve eagerly embraced mentor texts as examples to follow or avoid…I must admit that I’ve often misused them as well… adopting a technique that may serve someone else’s story, but not yours.”

Why Is It So Hard to Write About Music In Fiction? by Anne Valente from Lit Hub. Peek:

“I’ve created similar playlists for each book I’ve written to remember the patterns and rhythms, as well as the emotional tone of the sounds, that went into writing the words even if the songs that mean something to me never make it to the page.”

“‘Bridging conflict’ can span the distance from opening to inciting incident—and what that means for your character is that he needs to arrive on page one with an intermediate goal.”

“The submission process is as subjective and personal as dating, and to be approached rather like dating—with thoughtfulness about who you are, what your book is, and what you want out of the agent/editor/publishing relationship, and with a sense of humor as well.”

What’s Your Author Persona? How To Be Yourself Online—Only Better from Anne R. Allen. Peek:

“I don’t mean to say you should wear a mask or play an inauthentic character online. Nobody likes a phony. Your persona should simply be your best self…”

“According to the Pew Research Center, broken Spanish (or no Spanish at all) is a reality lived by a growing number of Latinx, especially youth… Below is a list of recently published middle-grade novels featuring Latinx characters whose Spanish is less than perfect.”

“…for those ‘historically underrepresented among workers in book publishing—Indigenous, people of color, LGBTQIA+ folx, and those with disabilities.’… The fellowship is full-time with benefits, and will last up to two years with a $30,000 salary… Milkweed Editions is accepting applications from now through June 6…”

Why We Need More Black Characters In Fantasy by Ebony Elizabeth Thomas from Yes Magazine. Peek:

“A new report released by BookNet Canada revealed that some 60% of Canadians are actively seeking out diverse reading material, which includes stories about or written by under-represented minorities, such as BIPOC, LGBTQ+, disabled or differently abled, and minority religious groups.”

“While I use traditional review sources, I have also found it helpful to explore online resources specifically intended to review and publicize diverse books…I decided to make this handy infographic of the sites I find most helpful.”

A Decade of LGBTQ YA Since Ash from Malinda Lo. Peek:

“I’m especially encouraged by the growth in genre fiction. Genre fiction often allows LGBTQ characters to have stories other than coming-out narratives, which still predominate in contemporary fiction.”

‘The (Other) F Word’ Is A Vibrant Anthology That Celebrates The Fat & Fierce — Start Reading Now! by Kerri Jarema from Bustle. Peek:

Lift Every Voice: From One Book To Many by Rita Williams-Garcia from The Horn Book. Peek:

“Like many Black children my age, I knew Coretta Scott King from an iconic photograph taken at her husband’s funeral. What I didn’t know back then was that Coretta Scott King was integral to an all-important change furthering inclusivity in children’s literature.” 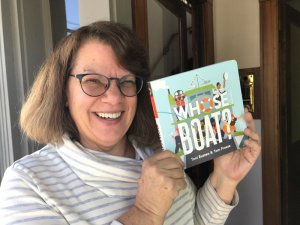 I’m honored to announce that Hearts Unbroken was named to the Bank Street College of Education’s 2018 Best Children’s Books of the Year (teen/YA category). Peek:

“…chosen by reviewers for literary quality and excellence of presentation as well as the potential emotional impact of the books on young readers. Other criteria include credibility of characterization and plot, authenticity of time and place, age suitability, positive treatment of ethnic and religious differences, and the absence of stereotypes.” 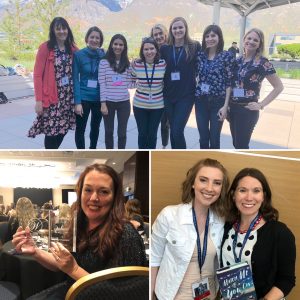 This past weekend I traveled to Utah for the Storymakers Writing Conference. I

t was a treat to reunite with VCFA friends and the class offerings at the conference were stellar, especially Julie Berry‘s revision intensive.

Highlights included watching friend  Melanie Jacobson win a Whitney Award for her romance Perfect Set (Covenant, 2018) and meeting Tiana Smith, who I interviewed for our New Voices series, in person.

All in all, I’ve got new energy for some of my writing projects.

In June I’ll be teaching Creative Writing Summer Camp with the Austin Public Library Foundation. Three weeks with fifth and sixth grade writers exploring the magic of story and cultivating creativity. (And the secret is: teaching time infuses my own writing with new energy and ideas.)

This will be my second summer as a teaching artist and I’m thrilled to spend time with a group of MG readers and writers!