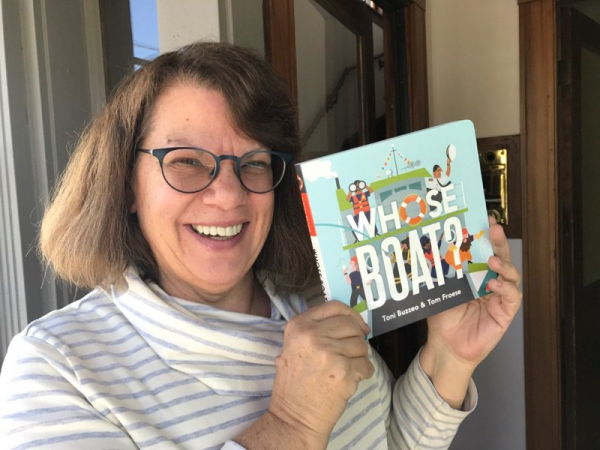 Toni Buzzeo is a successful children’s author with a long, distinguished career.

From here on the ground (Do you see me as I trundle along on my three-wheels-on-the-ground red tricycle?), I think less in terms of bumps than I do of long stretches of mostly smooth pavement occasionally interrupted by cavernous potholes and great patches of asphalt over mountains of tenacious, urban tree roots.

No doubt, that is because, having spent 37 years in the isolated bliss of rural Maine, I now live in a town that crowds close-in to Boston with sidewalks (imagine!) not kept in splendid repair.

I published so regularly in those Maine years, at least one but often two or more books per year, that the pavement felt pretty darned smooth. 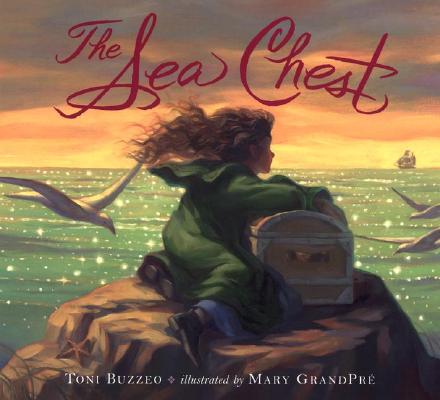 In 2000, when I sold my first picture book, The Sea Chest, illustrated by Mary GrandPré (Dial, 2002), I had been writing for children for five years. The book won the Crown Gallery Award and a Lupine Honor and received lovely review attention, a superb entrée into children’s publishing. Even better, The Sea Chest was followed by four additional titles with Dial over the next seven years.

In the meantime, I combined publishing for children in the trade market with educational publishing for kids while wearing my jaunty school librarian’s hat and published four children’s books with Upstart Books. These titles focused on teaching information literacy skills while telling a good story. Do you see how smooth the pavement was for my little red trike? 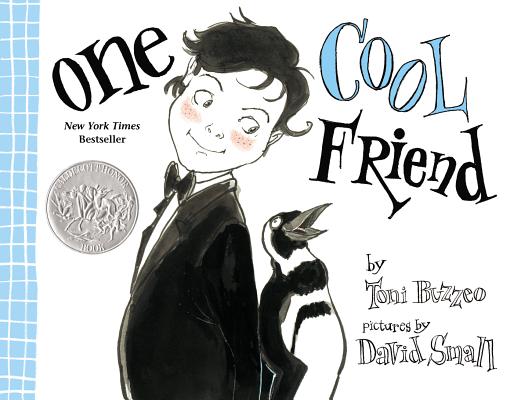 Then, ten years after The Sea Chest was published, I finally took my editor’s and agent’s advice and began to publish with other trade publishers. Of course, I also continued my relationship with my Dial editor—a warm and enriching connection that resulted in the 2012 publication of One Cool Friend for which David Small’s gloriously humorous illustrations earned him a Caldecott Honor!

The smooth pavement now combined with enough of a zippy downhill slope that, in 2015, I published four picture books. However, in my personal life I hit an enormous pot hole that autumn when my husband was diagnosed with terminal pancreatic cancer.

I fell into a crevasse so deep that it took years to recover enough to even be able to write. My trike was ruined and, as I packed up our home filled with memories of a life so carefully curated and moved myself two states away to Boston, it seemed possible I might never ride again.

(Perhaps, however, there was a corner of hope in my soul, for I spent thousands of dollars to move the beautiful writing cottage that Ken had built for me by hand to my new home two states away.)

Luckily, too, just before the crash that ended my life as I had known it, I had made a wise decision to acknowledge the changing landscape in children’s publishing (driven by the change in the world of education) and commit to adding nonfiction picture book writing to my efforts.

In fact, three of the books published in 2015 were nonfiction. The first and second were Whose Tools? and Whose Truck? the two Abrams Appleseed titles that launched my Whose? nonfiction board book series about careers, illustrated by Jim Datz. (The fourth title is newly under contract with a working title of Whose Big Truck?). The third 2015 title was my first picture book biography, A Passion for Elephants: The Real Life Adventure of Field Scientist Cynthia Moss, illustrated by Holly Berry (Dial 2015).

I really was a stubborn cyclist in the early days. I was sure that despite my editor’s invitation to submit to other trade houses when she rejected the first manuscript I submitted to her after she accepted The Sea Chest, I could have the Ursula Nordstrom experience.

“I’m not a jealous editor,” she told me over lunch.

But I was a starry-eyed writer/rider. And even though we all know that it’s so unusual in trade publishing these days to publish throughout one’s career with a single editor, I was committed to trying.

Had I listened to her sooner, I imagine that I’d have published more trade books more quickly. In some ways that might have been a good thing, publishing more fiction picture books when that was an admittedly easier task, building my reputation in the industry sooner and, perhaps, earning some more money during the lean years when my husband was transitioning in his career.

But really, who is to say? I loved being a one-trade-editor author, and I did have the Upstart educational books to make me feel that I was sailing along on my trike.

One other thing that I would do differently–something that no one could tell me at the time—was not to worry about writing (or actually, not writing) as I grieved the loss of my husband and my Maine home and life. 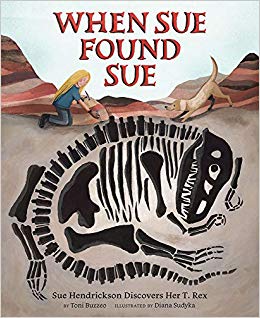 I am a writer, and writers write. I wish I had been able to trust that I would once again write during the nearly two years that I cared for Ken and then, after his death, cared for myself. Instead, I fretted, I agonized, I could not let go of my fear that I might never write, and publish, again.

Would that I could have lifted myself up enough to see over the rim of that deep and unimaginably dark crevasse. I wish I could have seen myself now, about to launch my twenty-sixth book, When Sue Found Sue: Sue Hendrickson Finds Her T. Rex, illustrated by Diana Sudyka (Abrams, 2019), an exciting time in my career.

Perhaps it would have given me the comfort and confidence to sink into that joyless time without the added burden of the deep fear that my writing career had also ended.

Oh goodness, everything seems to have changed in the past nineteen years!

Picture books are so much shorter, aren’t they? The Sea Chest exceeds 1200 words. Now I am hearing editors at conferences routinely saying that the sweet spot for a fiction picture books is about twenty-five percent of that—a mere 300 words (and never more than 500)!

There’s also now a really welcoming attitude toward picture book nonfiction at trade publishing houses. I’m so happy that I was nimble enough to turn my attention toward nonfiction in February of 2014 when a young nonfiction reader at a school visit in upstate New York challenged me.

“Why don’t you write nonfiction for kids?”.

So, I committed myself to learning to write deeply-researched nonfiction for young children like the many nonfiction books I admired and added to my libraries’ collections in the years I was a school librarian.

And then, of course, there’s the whole opportunity/conundrum of social media and how each author decides to use it for connection and promotion. I’m much less involved in social media than many of my author colleagues, but I’m working toward finding a comfortable spot to park my bike.

I would definitely encourage her to think immediately about introducing nonfiction picture book writing into the mix of her projects.

While in my early days of publishing, nonfiction was still primarily published by the institutional/educational houses, now it offers excellent opportunities for both established and emerging writers to write creatively in the many nonfiction formats, including lyrical narrative to which I am personally drawn.

I wish for the field of children’s publishing to continue to offer authors opportunities to experiment, to find new creative paths, to grow and evolve in our craft without limiting any of us with the boundaries of what we have previously published.

Because there is no end of children who need the books that arise from all of that. And those children are why we write and why publishers publish our books. 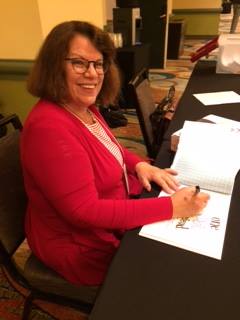 I hope to continue to be both nimble and responsive in my approach to writing and publishing.

I hope to continue to ride my (new) little red trike alongside my dearest writing friends, those who read my manuscripts with a critical eye, those who help me to map out my path around the unanticipated hazards, those who never fail to cheer me at the finish line when I flash across with my helmet askew and my heart thumping in my chest.