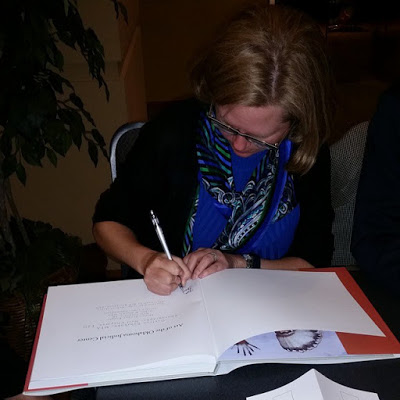 I’m honored to announce that Gayleen Rabakukk has been chosen as the summer-fall 2016 Cynsations intern. Thanks to all who applied!

“You mean you both just sit there and write? On different things? And don’t talk?”

“Yes,” I tell my non-writing friends.

I realize how odd that may sound. There was a time when I would have thought it was strange, too. For many years, I’d done all my writing alone. I’d published lots of newspaper and magazine articles, exploring topics ranging from exotic pets to forensic science.

Eventually, I felt the pull to make something that would last longer than the weeks a magazine article is around, so I tried my hand at adult mysteries, (one of my favorite genres) and eventually young adult novels.

Looking for help with the transition from journalist to novelist, I became active with the Oklahoma Writers Federation, Inc. (OWFI), volunteering at their annual conference and serving on the board as a grant writer. After a few rejections, I decided instead of guessing what “narrative voice” and “connecting with the character” meant, I would go back to school and really learn how to write for children and young adults.

I applied to Vermont College of Fine Arts, doubting that this Oklahoma journalist would be accepted.

When I got a call from Sharon Darrow one afternoon welcoming me to the program, I couldn’t believe it!

My initial residency was filled with firsts: first time in New England, first time my nostrils froze, and the first time I really had deep, serious conversations about writing.

I ended up in a small workshop led by Tim Wynne-Jones where I learned about objective correlatives and adding layers of meaning to your writing. I learned so much I thought my head would explode.

That feeling continued, to varying degrees, throughout my four semesters. The more I learned, the more I realized I didn’t know.

Each semester I had a new advisor. Jane Kurtz, Cynthia Leitich Smith, Rita Williams-Garcia and Franny Billingsley taught me how to write, how to read, and how to apply what I learned to my own work.

I squeezed writing and reading children’s literature into every spare moment I could find: audio books during my daily commute, writing on lunch breaks and in the evenings, reading on the treadmill. Fortunately, my youngest learned how to cook, otherwise my family might have starved while I was a grad student.

After graduation, I tried to stay on track, but the writing demands of my day job had increased and I didn’t have as much time for children’s books. The Supreme Court of Oklahoma wanted me to write a book about the art collection at the Oklahoma Judicial Center. It would definitely be published, and in a format that would be around for a long time. This was what I had set out to do so many years ago: create work that would last longer than a magazine article. 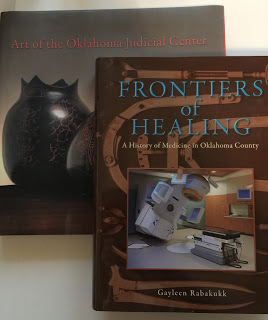 Almost immediately after that project ended, another one came along: the Oklahoma County Medical Society was looking for a writer to document their history. Once again, it was a book that would definitely be published, with guaranteed monetary compensation.

It wasn’t children’s literature, but it would prove that I could generate steady income as a writer (at least during that year-long project.)

I learned so much writing those books: from research techniques to the dynamics of working with a collaborator, yet something was missing. I wanted to recapture that sense of camaraderie I’d felt in Vermont.

Most of my writing efforts up to that time had been solitary. Sure, I had writer friends and occasionally exchanged manuscripts with several of them.

I paid my membership fees to OWFI and SCBWI, but I had never really embraced the idea of being part of the “writing community.”

After all, I told myself, writing is a solitary pursuit – I’m the one putting words on the page, no one can really help me with that. Vermont was a magical Brigadoon: like-minded writers all gathered on a hilltop for a fortnight. That sort of thing just didn’t happen in the real world.

Then a geographical shift led me to a paradigm shift. Last July, my family and I moved to Austin, Texas and I quit my day job. This put me in close proximity to Meredith Davis, a fellow VCFA classmate and other alums. The first time she suggested we get together to write, I was a little skeptical, but I gave it a shot. I said “yes” and apparently, that’s all it took for me to realize the benefits of writing in a community.

Now these group writing times take precedent on my weekly calendar. Sometimes it’s just Meredith and me meeting at a coffee shop, other times it’s an organized potluck retreat with half a dozen writers.
At the end of the day, it’s still just me putting those words on the page, but I’m learning that spending time with other children’s writers provides a creative energy that recharges my batteries and keeps me coming back to the page, day after day – long after I’ve left the coffee shop.

In an effort to draw others into this awesome community, I recently began co-moderating the middle grade book club for our SCBWI chapter. Our goal is “reading for writing,” so we analyze and discuss character motivations, plot and point of view in depth. It all takes place on Facebook, which means I get to work it into my schedule wherever it fits, instead of trying to make it to a meeting at a certain time.

There are several book club members I’ve never met in person, but we’re connected through our book discussions, and I continue to grow in both my knowledge and passion for children’s literature.

Some days I’m still trying to figure out how to connect with readers, but I’ve learned a lot about the importance of connecting with a community. Writing discussions aren’t just reserved for snowy hilltops, they can happen in coffee shops, libraries and even on Facebook.

You just have to say “yes.”