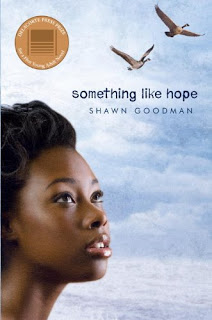 Shawn Goodman is the first-time author of Something Like Hope (Delacorte, 2010). From the promotional copy:

Shavonne is a fierce and desperate seventeen year-old who finds herself in a large juvenile lockup hundreds of miles from home. She wants to turn her life around before her eighteenth birthday, but her problems seem too big, and time is running out.

Amidst corrupt guards, out-of-control girls, and shadows from her past, Shavonne must find the courage to fight for a redemption she’s not sure she deserves.

This gritty and unflinchingly honest look at life in juvenile detention, winner of the 2009 Delacorte Contest, will break your heart, change the way you think about “troubled” teens, and ultimately, leave you feeling something like hope.

What were you like as a young reader, and how did that influence your debut book?

I hated reading until I got my hands on The Lords of Discipline by Pat Conroy (Bantam, 1980). I was fifteen, and I remember staying up late reading by flashlight; my parents thought something was wrong with me because, for several days (I was and remain a very slow reader), I hardly came out of my room or played ball with my friends.

It was an awakening of sorts. I hadn’t known books like that existed. Before that, all the books I had read seemed like they were written for other people, people who talked differently and cared about different things. People who had no idea about my experiences or what was important to me.

And every day in English class, it was this slow death picking through irrelevant plots to find examples of symbolism, and foreshadowing. None of it meant anything to me. Which is why, as a YA writer/former reluctant reader, I have to keep in mind the thousand or so reasons kids have to not read.

But it’s the deeper reasons concern me most, the ones that point to the disengaged kids who have given up on reading, and learning new things about the world. And it is for them that I try and write books with short engaging chapters, plenty of action and dialogue, and strong emotional content.

And I avoid big words, which is not to say that kids won’t understand; they do. But it’s more about establishing the right rhythm and cadence, like when kids are free from any adults and they talk to each other in this quick, easy, unobstructed way. Their language is infinitely flexible because it’s not bound by the rules, responsibilities, and conventions that govern almost everything that we as adults do.

The best YA books really nail that perfectly, and, not surprisingly, kids respond strongly. 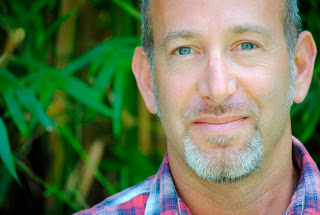 Originally, I wrote Something Like Hope to process my own experiences working in a girls’ juvenile justice facility. Everything happening around me in those years was extreme and very disturbing, so I didn’t think about frames of reference or where things fell on the spectrum of behavior.

There was so much violence, and despair in those places that the only question was of how to tell the story accurately yet in a way that could be believable. I suspect that this is often the case when dealing with closed systems or groups of invisible people. Do you tell it like it really is, or do you make compromises for the sake of the story?

It’s a big question, and I think, ultimately, readers will have to judge if I responded adequately in Something Like Hope. I suppose I could defer to the standard about doing what’s right for the story, but that might be too simplistic for an emotional book about a character who is desperate and, at times, out of control.

Add to that the fact that she is changing, growing, actually, and reacting to other out-of-control characters, and how can you know what kind of behavior is right or wrong, and if it’s too edgy?

At the risk of sounding vague or mystical, I think that, at least in the case of this book, it comes down to tone. If I had compromised too much and changed the language, say, I took out some of the raw, violent, and offensive language, then I’m pretty sure the tone of the book would end up getting fouled. And if I took out a difficult or disturbing scene, it would have the same effect.

So for the kind of writing I do, which often deals with trauma and shame and, sometimes, redemption, it’s not so much a question of edginess as it is one of tone and how it
all feels.

Shawn Goodman is a writer and school psychologist. His experiences working in several New York State juvenile detention facilities inspired Something Like Hope. He has been an outspoken advocate for juvenile justice reform, and has written and lectured on issues related to special education, foster care, and literacy. Shawn lives in Ithaca, New York, with his wife and children. Author photo by Sonya Sones.

“Debut novelist Goodman…delivers a gritty, frank tale that doesn’t shrink from the harshness of the setting but that also provides a much-needed redemption for both Shavonne and readers.” —Kirkus Reviews

“Goodman’s portrait of a life in crisis is heart- and mind- and gut-wrenching; his protagonist is hopped up on rage, surrounded by guards who are physically and emotionally abusive.” —The Horn Book

10 thoughts on “New Voice: Shawn Goodman on Something Like Hope”