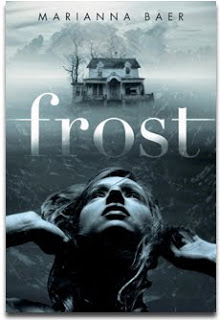 Marianna Baer: new official site. Peek: “…received an MFA in writing for children and young adults from Vermont College of Fine Arts, and a BA in art from Oberlin College. She also attended boarding school, where she lived in a tiny dorm called Frost House, the inspiration for her first novel, Frost (Balzer & Bray, September 2011). She currently lives in Brooklyn, New York.”

6 1/2 Ways to Create Suspense in Fiction by April Henry from Donna Gephart at Wild About Words. Peek: “Give your characters phobias or fears – and then make them face those fears. Afraid of heights? The final confrontation should take place on a rooftop.” See also April on Just Add Tension: How to Make Any Book–But Especially Mysteries and Thrillers–Better from Cynsations.

Writing That Woman by Cayla Kluver from E. Kristin Anderson at The Hate-Mongering Tart. Peek: “Her beliefs and her philosophy will come through to readers not because she gives us the scoop on repeat, but because those philosophies are part of her DNA.”

Our Best Advice for Writing Fantasy by the Inkies from The Enchanted Inkpot. Peek from Bryony Pearce: ” I reckon you should immerse yourself in your world so much that it seems normal and everyday and then write about it as if it is normal and everyday – almost as if you’re writing contemporary urban fiction – you shouldn’t feel the need to explain every little thing.”

Social Networking: So Many Options, So Little Time by Danyelle Leafty from QueryTracker.com. Peek: “…knowing the why is a crucial first step, because you are projecting an image of yourself out there, and that image will become your brand. Knowing why you’re there can help focus your efforts as you make deliberate decisions on exactly what your brand looks like.”

The Most Misunderstood Piece of Advice for Young Writers: Write What You Know by Keith Schoch from How to Teach a Novel. Peek: “Maybe those who first shared that adage meant to say, “Know it, by first finding it and experiencing it, and then write it.”

Congratulations to the winners and runners-up for the Florida Book Awards! Congratulations to Jan Godown Annino winner in children’s literature for She Sang Promise: The Story of Betty Mae Jumper, Seminole Tribal Leader (National Geographic Society) and Christina Diaz Gonzalez, winner in the young adult category for The Red Umbrella (Knopf).

Why They Need Us: The Story Gap by Marc Aronson from Nonfiction Matters. Peek: “Only after the child has been the hero herself, questing into the unknown, can the writing process begin. Adults who judge books solely on writing, on language, do not know how to help children in that first phase of inquiry.”

The Making of a Book Trailer by Kimberley Griffiths Little from Spellbinders: Helping Librarians and Educators Create Lifelong Readers. Peek: “In the beginning, book trailers were created with still photography or images, and a running line of text to explain the storyline with music added that fit the mood of the book. Recently, book trailers are being created with live action filming and voice-overs.”

3 x 5 Index Card Plotting by Kimberley Griffiths Little from Kimberley’s Wanderings. Peek: “I have jumbled notes, jumbled thoughts inside my head and different plot ideas – or ideas for scenes that are all mixed-up in my brain. I need to start organizing those scenes and plot points. Here’s where the 3×5 card Plotting Method comes in very handy!” See also Kimberley on Craft, Career & Cheer from Cynsations.

How Much Does a Writer Make? by Laura Purdie Salas from Writing the World for Kids. Peek: “Keep in mind, this is only gross income. This doesn’t include any of my own expenses–travel, promotion, office supplies, etc.–nor the taxes I have to pay (which worked out to about $17,000).”

Inspiration: Persecuting the Perfectionist by Bethany Hegedus from Writer Friendly; Bookshelf Approved. Peek: “Triers are brave. We show up. We know there is work to do. We know it won’t be easy but we try.” See also Bethany Hegedus on Between Us Baxters and Truth with a Capital T from Cynsations.

Featured Sweetheart: Kate Klimo, VP and Publisher at Random House/Golden Books for Young Readers Group, from The Texas Sweethearts. Peek: “There is no doubt that there is a Harry Potter effect, causing children to jump to older and more complex books earlier than they used to in the old days. But we at Random have seen plenty of evidence, in the way of sales data, that there is always room on the shelves for a new and wonderful picture book—both picture books with very brief text and picture books with more complex text geared to older readers….”

Fighting Cootie-Phobia as a Lady Writer of “Boy Books” by K.A. Holt from E. Kristin Anderson at The Hate-Mongering Tart. Peek: “So while I write ‘boy books’ I always have strong female characters. No one needs saving from Prince Charming in my books… Boys and girls work together to solve problems, save the world, get out of detention unscathed, and keep chupacabras from causing difficult situations to worsen.” See also K.A. Holt on Mike Stellar: Nerves of Steel from Cynsations.

UT Alumna (K.A. Holt) Writes Novels in Haiku Form by Madeline Crum from The Daily Texan. Peek: “Although her company allowed her to bring her child to work for a few months, she was soon faced with a choice: keep a job that would hardly afford decent day care services, or take a risk and freelance from home. After choosing the latter….”

Congratulations to Donna Gephart, the 2011 Children’s Writer in Residence at Thurber House! Note: don’t miss the previous link for a reminder about the value of persistence.

Querying Age: Are You Too Young or Too Old? by Stina Lindenblatt from QueryTracker.net. Peek: “Never, ever, mention your age in a query. You only include the essentials. Your age is not essential.”

Marshall Cavendish has announced that publisher Margery Cuyler will be featured on an episode of NBC’s series “The Celebrity Apprentice” March 13th. In the episode, the cast featuring celebrities such as Gary Busey and La Toya Jackson will split into two teams and engage themselves in publishing children’s literature. Both teams will author an original children’s picture book to help raise money for charity. Their works will be evaluated by actress Robin Holly and by Marshall Cavendish Children’s Books publisher Margery Cuyler.

Accessibility vs. Immersion by Parker Peevyhouse from The Spectacle. Peek: “I love a book that throws me into a strange setting and assumes I’m intelligent enough to figure out what’s going on.”

What Is Agent Jill Cocoran Looking For? by Kathy Temean from Writing and Illustrating. Note: a list of specific types of manuscripts of interest, plus links to additional pertinent information.

Hoping for a Movie Deal, Part 1 by Rachelle Gardner from Rants & Rambles on Life as a Literary Agent. Peek: “An option gives a production company the exclusive right to begin developing your manuscript into a film. They may have a writer start working on the screenplay; they may begin trying to attach other elements like directors and actors. Or they may sit on it and do nothing.”

Andrew Karre – Editorial Director – Carolrhoda Books by Tina Nichols Coury from Tales of the Rushmore Kid. Peek: “A manuscript is an audition for a working partnership, and those partnerships are more fun and more successful when the worker is skillful.” Source: April Henry.

Check out the book trailer for Just Being Audrey by Margaret Cardillo, illustrated by Julia Denos (Balzer & Bray, 2011). 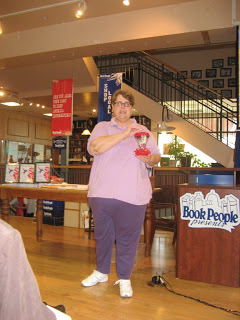 Austin author-librarian Jeanette Larson spoke on “Loving the Librarian” at an Austin SCBWI meeting, followed by a launch event for her debut children’s book, Hummingbirds: Facts and Folklore from the Americas, illustrated by Adrienne Yorinks (Charlesbridge, 2011).

Highlights of the event included a hummingbird feeder giveaway to one lucky winner! 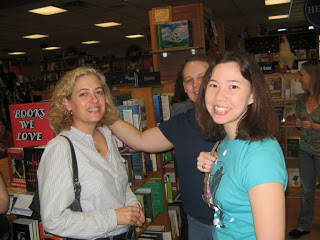 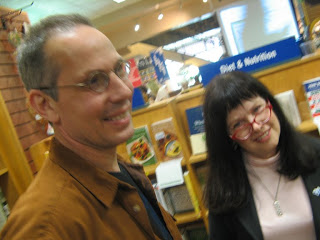 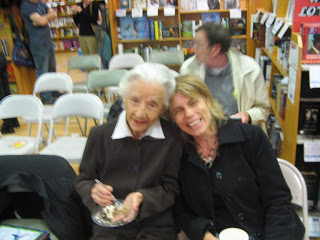 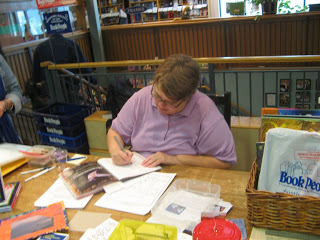 Thanks to Sena, for this terrific work of reader art and permission to share it! 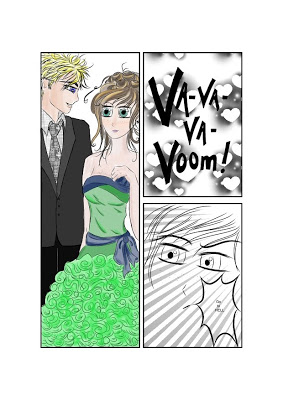 Above, Sena has created a depiction a scene from Blessed (Candlewick, 2010), featuring Brad and Quincie at Sabine’s party! Click image to enlarge.

Eternal Review by Jessica from Reading Inspires. Peek: “This also answered the ‘Which religion is the right religion?’ question. Answer: Anything you believe, you’re okay. Your guardian angel doesn’t discriminate.”

Links of the Week: Photo of Rita Williams-Garcia at the NAACP Image Awards and Dana Walrath To Present Sketchbooks at SXSW.