Fall 2019 Flying Starts: Christine Day by Erin M. Fry from Publishers Weekly. Peek: “Patrick Ness—author of the Chaos Walking trilogy (Candlewick)—gave an author talk at her school. ‘He said that the only thing you really needed to do to become a writer is write and read and write some more,’ she recalls. Day took Ness’s advice and started writing young adult novels…”

Three YA Authors Share Their Best Writing Advice from We Need Diverse Books. Peek: “Melissa de la Cruz: ‘Never give up. At some point, if you keep knocking on the doors long enough, one of them will open…’ Ashley Woodfolk: ‘If you want writing to be your job, you have to write like it’s your job….’ Jenny Torres Sanchez: ‘…[P]roduce. The world needs your voice and your art.’”

Q&A with Chris Barton by Eugenia Vela from BookPeople. Peek: “I wanted it to be clear to readers that while All of a Sudden and Forever (Lerner, Feb. 4, 2020) is a book about the Oklahoma City bombing, it is not a book only about the Oklahoma City bombing. One way to do that was with the Recommended Reading. I knew what the book’s themes were, and I sought out books on those themes, or included books that I was already familiar with, such as Maira Kalman’s Fireboat (Puffin, 2002) and Liz Garton Scanlon and Marla Frazee’s All the World (Beach Lane, 2009).”

The deadline for applications for the KWELI Journal Scholarship to attend The Color of Children’s Literature Conference, which takes place April 4 in New York City, will be accepted from BIPOC writers, illustrators, teachers, and librarians until 6 p.m. on Feb. 2.

Tonya Bolden: Capturing History’s Rhymes by Kristin Anderson from School Library Journal. Peek: “Bolden’s work draws lines directly from the past to the present in a powerful way—her newest novel is set a century ago and its messages are still relevant today. Saving Savannah (Bloomsbury, Jan. 14, 2020) follows affluent African American teenager Savannah as she navigates the tumultuous summer of 1919….”

2020 Debut Authors by Edith Campbell from CrazyQuiltEdi. A list of books by BIPOC debut authors, arranged chronologically by release date.

Dawn Quigley Blends Experiences as Reader, Author, and Instructor to Change Children’s Literature for the Better from St. Catherine University. Peek: “[T]oday’s educational sites must begin to be the site of Indigenous self-determination and trauma healing, beginning with the inclusion of Indigenous representations in literature.”

Five YA Titles Featuring Characters With Physical Disabilities by Rebecca Weber from We Need Diverse Books. Peek: “I am an academic librarian who loves children and young adult literature….I also live with mild cerebral palsy and often walk with lofstrand crutches. I don’t claim to be an expert on disabilities….I am, however, interested in seeing more accurate representation of characters with disabilities. I want more books that represent the whole person….”

On Being Comfortable with Discomfort: Tiffany Jewell Explains What It Means To Be Anti-Racist by Vanessa Willoughby from School Library Journal. Peek: “We’ve got to not just understand personal biases and prejudice, we need to go further and understand how our institutions are working to uphold white supremacy culture and colonial mentality.”

Countdown to CHIRP: Outlining, Drafting, and Outlining Again (and how Scrivener helps with the process) from Kate Messner. Peek: “Because rough-drafting is the tough part of the writing process for me, I tend to do it quickly, so I can get that first draft over with and start revising, which I love.”

Re-Vision Lessons from Lizzie by Beth Anderson from Rate Your Story. Peek: “Critique groups offer immensely valuable lessons—not only from the feedback you get, but what you learn in providing feedback to others. Often it’s easier to identify issues in someone else’s writing than your own…Now I generally have 30-40 revisions before submission.”

How Middle Grade Chose Me by Janae Marks from MG Book Village. Peek: “Something readers are surprised to hear about my middle grade debut, From the Desk of Zoe Washington (Katherine Tegen, Jan. 14, 2020), is that I originally planned for it to be a young adult novel with a sixteen-year-old protagonist.”

Interview with Wendy McLeod MacKnight, author of The Copycat from Bookish Fangirl. Peek: “I tend to write my first draft very quickly, then torture myself over multiple revisions! It typically takes me three drafts to really get a handle on the book I am trying to write!”

HarperCollins Launches Quill Tree Imprint by Emma Kantor from Publishers Weekly. Peek: “Launching in fall 2020 with the motto ‘Many branches, Many voices,’ Quill Tree will focus on publishing authors with a strong point of view, as well as those who are often underrepresented…(Rosemary) Brosnan told PW, ‘Ever since I started in the industry, I’ve published diverse authors and illustrators…We publish literary, award-winning books that have wide appeal…We like books that have a fresh point of view, a strong narrative voice, and something worthwhile to say to young people.’”

Editor Interview: Carol Hinz (Millbrook Press & Lerner Publishing) from Only Picture Books. Peek: “I like to be surprised by books—whether that surprise comes from encountering a topic I was previously unfamiliar with or from encountering an innovative presentation of a familiar topic.”

Nine Lessons From Ten Years in Publishing from Malinda Lo. Peek: “[A]fter your novel is published, it no longer belongs to you. It belongs to its readers.…If your book is traditionally published by a mainstream publisher, they’re already going to be investing some amount in book promotion…For the vast majority of authors, I recommend spending maybe $150 on bookmarks….”

Seven Successful Authors Share Their Best book Marketing Tips from Rachel Sarah. Peek: “K.A. Reynolds, author of the 2018 [middle grade] fantasy novel The Land of Yesterday (HarperCollins), hosts giveaways online as if readers were [present] in person to win. ‘Running giveaways on social media are my most productive, successful and favorite marketing tool, which is perfect for me, as I really love giving fun things away’….”

Jason Reynolds Named National Ambassador for Young People’s Literature by Sue Corbett from Publishers Weekly. Peek: “As ambassador, he will visit areas that rarely if ever host an author….’I’m going to rural America, and we’re going to pick one or two kids, maybe one of the knuckleheads, or the one with the discipline problems, and have them interview me. Ask whatever they want to ask in front of a live audience.'” Watch Jason’s inauguration speech from the Library of Congress.

In U.S., Library Visits Outpaced Trips to Movies in 2019 by Justin McCarthy from Gallup. Peek: “Visiting the library remains the most common cultural activity Americans engage in, by far. The average 10.5 trips to the library U.S. adults report taking in 2019 exceeds their participation in…other common leisure activities….[L]braries have endured as a place Americans visit nearly monthly on average.”

Huge congratulations to all those honored with ALA youth media awards, but especially former Cynsations reporter Traci Sorell who, along with the late Charlene Willing McManis, received the American Indian Youth Literature Award (AIYL) in the middle grade category for Indian No More (Tu Books, 2019).

Check out a Cynsations interview with Charlene about landing her book deal, and Traci’s interview about completing the novel after Charlene’s death.

Kadir Nelson, illustrator and winner of the 2020 Randolph Caldecott Medal also won the 2020 Coretta Scott King (Illustrator) Book Award for The Undefeated, by Kwame Alexander (Versify, 2019). Check out a Cynsations interview with Kadir about his illustration process.

Congratulations to the winners of the Walter Dean Myers Awards and Honor Books. Award winners include Laura Dean Keeps Breaking Up with Me by Mariko Tamaki, illustrated by Rosemary Valero-O’Connell (First Second, 2019) and The Bridge Home by Padma Venkatraman (Penguin Random House, 2019).

RWA Cancels 2020 RITA Awards by John Maher from Publishers Weekly. Peek: “As a controversy over bias and a lack of transparency at the Romance Writers of America continues to roil the country’s foremost writers association for romance writers, the RWA has announced that it will postpone the 2020 RITA Contest until next year. The RITA Award is the U.S.’s top prize for romance fiction.” Note: This award program includes a YA novel division.

‘Empower Native Kids to Read’ by Aliyah Chavez from Indian Country Today. Peek: “The list of awardees includes 14 books written and illustrated by Native people. It also included ‘Molly of Denali’ which won an award for Excellence in Early Learning Digital Media.”

Congratulations to Heartdrum authors Dawn Quigley (Apple in the Middle (North Dakota State University Press, 2018)) and Christine Day (I Can Make This Promise (HarperChildren’s, 2019)) on their AILYA Honors.

Reading Stories Like Mine by Austin Fast from Indian Country Today. Peek: “Developing a diverse catalog of books is not as simple as walking into a community and demanding somebody there write a children’s book, Smith said. Authors need mentoring, resources and contacts to break into the competitive book-publishing industry.”

What We Were Reading 2019 from Native America Calling. Peek: “We’ll talk with Debbie Reese (Nambe Pueblo) about her favorite books by Native authors for young people…check in with Indigenous librarian, Catherine Baty (Big Sandy Rancheria Band of Western Mono Indians), about her favorite Native books she read this year. And author Cynthia Leitich Smith (Muscogee Nation) introduces us to ‘Heartdrum,’ a Native-focused imprint of HarperCollins Children’s Books.” On a related note, congratulations to Debbie and Jean Mendoza on their AIYLA Honor for An Indigenous Peoples’ History of the United States for Young People (Beacon, 2019).

Thanku: Poems of Gratitude, edited by Miranda Paul, illustrated by Marlena Myles (Lerner) was named an ALA Notable Children’s Book. Thanku and I Remember: Poems and Pictures of Heritage, edited by Lee Bennett Hopkins (Lee & Low) were named among the 2019 Nerdy Book Club winners for best children’s poetry books and novels in verse of the year. I’m honored to be among the contributors to both books.

During hiatus, I loved catching up on my to-be-read list and was particularly enchanted by Celia C. Pérez‘s Strange Birds (Kokila, 2019) and its ensemble cast who form their own alternative troop.

All four characters are so artfully drawn and I identified with all of them. (Really, I took the quiz on Nerdy Book Club and came up with a tie!)

Strange Birds inspired me to go deeper in developing the ensemble cast in my own work in progress, which has grown by 10,000 words since December, and to do more bird watching.

While on hiatus, I reveled in spending time with the family. We stayed home instead of traveling this year which meant extra time for reading! I especially loved Amy Sarig King’s The Year We Fell From Space (Scholastic, 2019) as well as Patricia Reilly Giff’s A Slip of a Girl (Holiday House, 2019).

Time at home also meant I was able to work on revising a middle grade novel.

One of the highlights of our winter break was a tour of Wake Forest University’s Special Collections at Z. Smith Reynolds Library.

My daughter and I got to see manuscripts dating from the 1700s as well as Maya Angelou’s theater and film collection. We also got to tour their digitization lab as well as learn the many ways they work to preserve the pieces in the collection. So thankful for our librarian friends and all they do to preserve books! 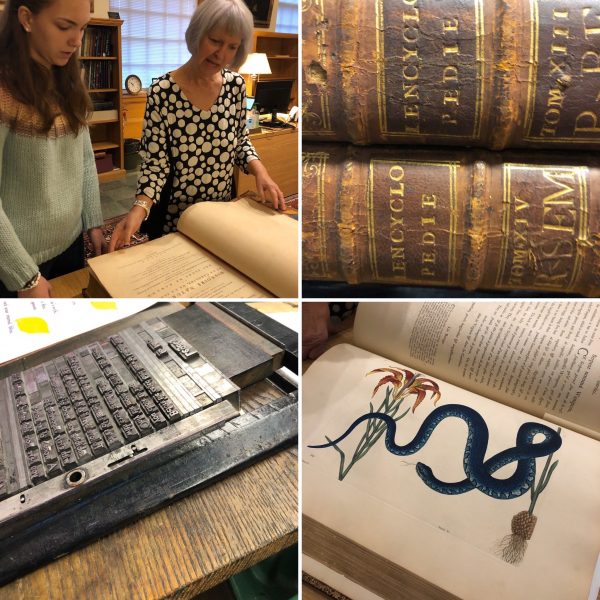