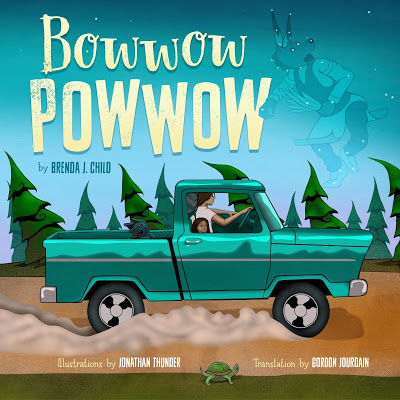 Windy Girl is blessed with a vivid imagination. From Uncle she gathers stories of long-ago traditions, about dances and sharing and gratitude.


Windy can tell such stories herself—about her dog, Itchy Boy, and the way he dances to request a treat and how he wriggles with joy in response to, well, just about everything.


When Uncle and Windy Girl and Itchy Boy attend a powwow, Windy watches the dancers and listens to the singers. She eats tasty food and joins family and friends around the campfire. Later, Windy falls asleep under the stars.


Now Uncle’s stories inspire other visions in her head: a bowwow powwow, where all the dancers are dogs. In these magical scenes, Windy sees veterans in a Grand Entry, and a visiting drum group, and traditional dancers, grass dancers, and jingle-dress dancers—all with telltale ears and paws and tails. All celebrating in song and dance. All attesting to the wonder of the powwow.

Bowwow Powwow gives readers a fun, imaginative and colorful story about Windy Girl and her dog at the summer’s last powwow. Told in both English and Ojibwe, it helps those in Ojibwe language programs and immersion schools have a beautifully illustrated story to read.

Now about those illustrations . . .
Jonathan, you’re an award-winning painter and digital media artist. Your animation work has won first place at the SWAIA – Santa Fe Indian Market the past three years. Previously you’ve digitally illustrated a Native comic book for grown-ups and a children’s book. But what brought you to illustrate Bowwow Powwow?

I have worked in a range of different creative mediums from canvas to digital over the years. I think the collaborations I have been part of won me some recommendations to be a part of this project.

When the folks at Minnesota Historical Society (MNHS) Press approached me in January of 2016 the book had already been written for some time.

I had illustrated one other children’s book in 2011, called Naadaamaading (Wiigwaas Press, 2013), with much success. So I drew from that experience and from being an animation artist, applying both to this task. When I was given the chance to make some concept art for the book I went with a drawing that I considered to be both magical and luring to readers to want to see more.

I also drew influence from my childhood memories of the Pow Wow in Red Lake where I was born. After reviewing my drawing and several talks with MNHS Press, I was commissioned to do the full book.

I didn’t grow up in the Pow Wow culture. My parents would bring me to Pow Wows when I was a boy. I knew doing the art for Bowwow Powwow would take a bit of research on my part but I was up for the challenge.

Typically with picture books, the author and illustrator do not meet or discuss the work as each craft their part of the story separately. Did you already know author Brenda Child, a fellow Red Lake Ojibwe Band citizen? Or did the editor put you all in contact?

I knew Brenda Child from meeting her at art exhibits where I would be showing my paintings. We would chat and discuss art and the careers of various artists at these events.

When the project started to come into its early production planning stages she visited my studio in Duluth. We talked about the origin of her story and compared notes of Red Lake memories, family life and Pow Wows. This gave me a feel for what Brenda had in mind when she wrote the book.

After that meeting my contact for the book was Shannon Pennefeather at MNHS Press. She helped me develop the feel and look of the scenes and main character, Windy Girl.

What craft and career advice do you have for Native artists who might be interested in illustrating?

For me it took some looking into the illustration world and finding out as much as I could. I looked for illustrators that jumped off the page at me and thought about why they stood out.

Illustrate stories that move you; it will show in the work.

I have been writing a picture book about bees which I will illustrate as well. The book will be the first I have written and illustrated since I was 12.

I look forward to seeing more of your work in children’s literature, Jonathan. 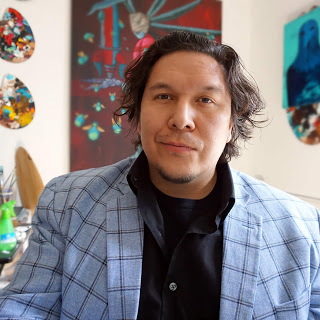 Kirkus Reviews wrote of Bowwow Powwow, “Simultaneously fanciful and reverent, this is a joyous look at a crucial tradition.”

To learn more about the Misaabekong Ojibwe Language Immersion, listen to this story from Duluth Public Radio.

Jonathan Thunder is an artist currently residing in Duluth, Minnesota. He has attended the Institute of American Indian Arts in Santa Fe and received a Bachelor’s Degree in Visual Effects and Motion Graphics from the Art Institutes International Minnesota.

His work has been featured in many state, regional, and national exhibitions, as well as in local and international publications. Thunder has won several first place awards in SWAIA’s annual Class ‘X’ Moving Images competition for animation and experimental film. Find him on Facebook at Thunder Fine Art. 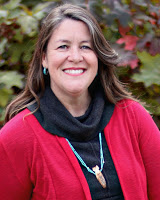