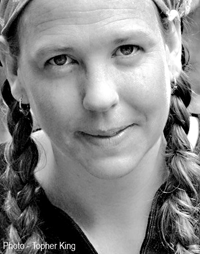 A.S. King on A.S. King: “A.S. King was born in Reading, Pennsylvania. After earning a degree in photography and working in a few stinky darkrooms, she moved to Dublin, Ireland; where she swore off television and started writing novels.

“Two years later, she moved to a small farm in rural Tipperary. There, she divided a decade between writing, teaching literacy, breeding rare poultry, and finding exciting ways to feed herself. She now lives in Pennsylvania with her husband and children.

“Her short fiction has appeared in numerous literary magazines and has been nominated for cool stuff. The Dust of 100 Dogs (Flux, 2009) is her first young adult novel. “

When I was a child, I’d stay up reading in my “office” (my bedroom closet) later than everyone else in my family, even though I was the youngest. I can’t remember much of what I was reading. I recall A Wrinkle in Time and a few other titles (Harriet the Spy and a lot of mysteries and ghost stories) but for the most part, I’d read anything. The weirder, the better. Once I found Paul Zindel, my early teen life was complete.

I relate well to young heroes and heroines. Younger characters tend to have genuine innocence, and can explore certain themes and subjects that adult characters can’t approach realistically. I feel this type of character has the potential to change (or at least, challenge) minds — and that will attract me every time.

Well, it took me seven novels and fifteen years to finally sell a book. I can’t say there were any sprints in that. Mostly, I stumbled along.

While we were living on the farm in Tipperary, I wrote all day nearly every day, balanced with farm chores–gardening to feed us, minding the chickens. It was the most ideal writer’s life I could ever imagine.

Though I did query agents and try occasionally to seek publication, it became clear that I was in the wrong country to sell the books I was writing, so I concentrated on enjoying my time there, because, man, was it nice! So, there was nothing I would have done differently.

I wouldn’t trade that time for anything.

I think, relating to craft, taking a few years to write poetry, and more recently, short fiction was most helpful to me as a novelist. I’d sworn off short stories back in 1996, when I’d written a few that were horrid. Then, in 2006, I wrote a story that got published and nominated for an award, so I continued to write and publish about fifteen more stories. It’s amazing how concentrating on the short form for a year made my novel-length fiction more immediate and fresh. 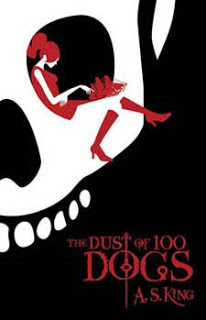 I like to say The Dust of 100 Dogs is part historical, part contemporary and part dog-training guide, but here’s the back cover blurb for a better description:

“In the late seventeenth century, famed teenage pirate Emer Morrisey was on the cusp of escaping pirate life with her one true love and unfathomable riches when she was slain and cursed with the dust of 100 dogs, dooming her to one hundred lives as a dog before retuning to a human body–with all her memories intact. Now she’s a contemporary American teenager, and all she needs is a shovel and a ride to Jamaica.”

The idea came from my journeys into Irish history. I used to walk my dogs down my small road [in Ireland] and think of the people who had walked that road before me. The rest unraveled from there.

My exploration of what the Irish endured, especially during Cromwell’s time, stirred feelings about the things women have endured throughout history.

For The Dust of 100 Dogs, the timeline goes something like this:

Queried and rejected by a lot of U.K. agents.

Moved to the U.S. in 2004. Rewrote book and queried U.S. agents with no luck. Put book in drawer with five other drawer books and started writing seventh book.

2006 – agent liked #7; he offered to represent me and started shopping the older novels, including The Dust of 100 Dogs.

I think that makes it an even decade between idea and book. I’m really hoping to slim that down next time around.

The big challenge when it came to publishing The Dust of 100 Dogs was my location.

Even as late as 2004, many agencies refused to accept email, which made things very expensive for someone like me, who had to spend up to $60 per full manuscript sent.

On the more positive side, that same location made the Irish history research easier through generous neighbors who offered their libraries of books I would have never found elsewhere.

Though I enjoy promoting, I’m still most excited by writing, and I’ve trained myself to turn off the Internet before noon when I am writing new material.

As promotion becomes a bigger part of my life, I plan to invoke the “I’m Allowed to Disappear Any Time I Want” rule at least twice a year.

I’m a mother of young children, and I run a contracting business from home.

At different times in my life I’ve been: a breeder of rare poultry; a photographer; a master printer; a pizza delivery driver;an electrician; a self-sufficient smallholder; a swimming addict; and (my favorite job ever) a literacy teacher.

And now that I’ve settled into my new home here in the U.S., I’ve started serving on my community library board as well as the swimming pool board. (Spot my two favorite things.)

I just finished a YA book called Ignore Vera Dietz and I’m working on another historical/contemporary YA mix that I should finish by December, all going well.

You can find me online at www.as-king.com or www.thedustof100dogs.com, or my blog, where I keep readers updated on D100D events and hold weekly writing contests.