As writers, we are frequently asked where we draw inspiration from. I think it’s true that everything we write is somewhat autobiographical.

I know I scatter a bit of myself in everything I write – that’s what gives it a soul and makes my stories “sing,” if you will.

In Finding Esme (Greenwillow, 2018) twelve-year-old Esme McCauley is reeling from the death of her grandfather, Paps, who she feels is the only one who loved and understood her. I lost both my grandfathers early – age six and nine.

I was hit particularly hard with the second one who we called Tio. Life was completely altered and I think I’ve left the footprints of that grief across Esme’s heart. It becomes the centering point for the novel for which everything radiates from.

But there are other bits of my childhood there too in smaller ways.

I descend from a long line of storytellers, particularly my father and his mother Edith, who told me wild and mysterious tales of Texas that were imbued with the mythical, the magical, and of course the taller the tale, the more “true” it was. There was always a moral or silver lining to their stories. 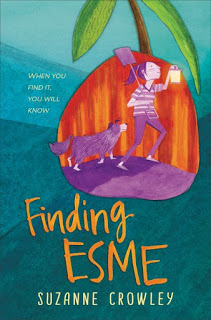 I listened. I took it all in. I inherited their curiosity and wonder of everything. There were ghosts stories, scary and benign, and people that could find water with a “witching stick.” There were home cures for nose bleeds and stomach aches.

They are all there in Finding Esme.

I added the tale of my grandmother, three months old, who lay untouched and sleeping in her bassinet as a tornado ripped over their house and how her mother injured her head trying to make it to her in time. It was “divine intervention” that my grandmother was unscathed. Her mother though, some said, was never the same.

I researched the story and found that indeed, in April of 1908, when my grandmother was three months old, a series of tornadoes struck across the Southern states over a three-day period.

In Finding Esme, the force of nature, or divine intervention, is used to explain why all the females in the family develop a magical gift – in Esme’s case, it’s the gift of finding lost things.

Esme’s grandmother is named Bee after the family’s business of keeping bees. My great-grandfather Oscar Saunders was a beekeeper in North Texas around the turn of the century then later in west, Texas. So was a great-uncle.

In 1900, there were over 150,000 bee colonies and many Texas farmers kept aviaries. When I visited my grandparents in west, Texas there was always a honey jar on the table to sweeten everything. It was particularly good dripped over hot buttery biscuits.

I remember playing with prehistoric-looking “horned toads” (they are actually lizards) all during my childhood in Texas, catching them and quickly releasing them to see them scurry away into the low brush. They are very rare now, and the Fort Worth Zoo, along with ecologists and other experts, are working hard on a breeding and release program.

The horned toad in Finding Esme, Bump, joins her every night as she secretly digs up dinosaur bones she finds on the spot where her grandfather died – the silver lining.

And then there’s the fireflies that lead Esme up the hill in the first place to her great “find.”

As children, we caught fireflies in mason jars on hot summer nights in an old, ancient cemetery across the street from my cousin’s house where an old gunslinger, John King Fisher, was buried.

Sounds creepy, but I thought the fireflies were magical the way they flickered on and off like ghosts. We let them go too, after a while. Then we scampered through the graves back home.

I keep files and files on unusual names and old sayings. My mother’s nickname (to this day, and she’s 81) was Pie, short for Sugar Pie. The McCauley’s horse is named Sugar Pie (sorry mom).

My sister overheard someone’s grandmother was named Sweetmaw at a beauty parlor. She became Bee’s sister Sweetmaw McCauley in Finding Esme, the antithesis to “mean as a hornet” Bee.

We can’t help but write about who we are. Use it, but hone it. Write what you know, write what you are curious about, and make some of it up (what are we without our imagination?).

Read as much as you can – that’s where you learn to put it together pretty.

The author, who is also a miniaturist and dollhouse collector whose work has graced the covers of magazines worldwide, was born in a small town in Texas and now lives in Southlake, Texas.

The Bulletin of the Center for Children’s Books gave Finding Esme a starred review.  “Esme is a brave, appealing heroine with the odds stacked against her…Bad blood and layered family secrets drive this story to its ultimately optimistic and satisfying conclusion.”