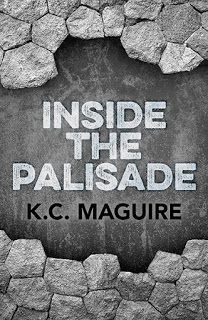 K.C. Maguire is the first-time author of Inside the Palisade (Lodestone, 2015). From the promotional copy:

Omega has grown up surrounded by women – literally.


Inside the palisade, women fall in love, marry and raise daughters, relying on an artificial insemination process known as the Procedure. But something goes horribly wrong.


One day, Omega comes face to face with a mythical monster – a man – within the society’s walls. Men had been eradicated long ago to protect women from the threat of violence. But this boy is not what Omega has been led to believe. And he needs her help.


She soon finds herself embroiled in a manhunt headed by a vigilante Protector, Commander Theta.


When she falls into Theta’s clutches, Omega realizes that there’s more to the banishment of men, and to her own past, than she’s ever known. Ultimately, she is forced to make a choice between betraying the lost boy and betraying her society, a decision complicated by the realization that she has more in common with him than she cares to admit, and the fact that she is developing feelings for him.

Could you tell us about your writing community – your critique group or partner or other sources of emotional and/or professional support. 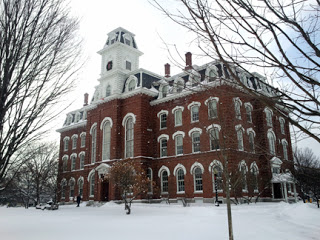 Because I’ve moved around a lot for my day job in recent years, it’s been a challenge to find a writing community that works for me. Lately, one of the most important sources of support and inspiration has been the amazing VCFA community. I’ve managed to find a network of friends, colleagues, and beta readers who are always there for questions, comments, reads, and general support.

I’m predominantly a YA writer, so I’ve also found writing groups through the regional branches of SCBWI in cities where I’ve lived. I have two amazing groups of writing friends in Houston, TX, one of which is an SCBWI critique group that meets weekly and provides as much friendship and support as thoughtful critiquing. It’s a wonderful mixture of picture book, middle grade, and young adult writers who experiment with different genres and are always willing to read something new. The other is a marketing support group where we experiment with different approaches to cross-promotions of our work whether traditionally, independently, or self-published.

As I’m currently living in Ohio, I’ve also been lucky enough to find some wonderful writing friends in the Midwest. North East Ohio is a great place for YA writers many of whom are extremely generous with their time and thoughts. Particular shout-outs here to Cinda Williams Chima and Rebecca Barnhouse!

It’s always a blessing to find new people who “get” your work and your process, and it’s wonderful when you can develop a shorthand way of critiquing with people who are familiar enough with your writing tics to be able to go for the jugular (in a good way) and shake you out of bad habits without pulling their punches. Sometimes people who try to be too kind are not actually doing you a favor. A strong critique partner will be prepared to tell you honestly what you’re doing wrong.

Professional support, friendship, and critiquing are one of the best ways to “pay it forward” in a field like fiction-writing that can feel incredibly isolating and emotional from time to time. Everyone has their good days and their bad days, and it’s important to be available to others and share around the goodwill on your own good days, because someone else is always sure to need to feel the love!

As a science fiction writer, what first attracted you to that literary tradition? Have you been a long-time sci-fi reader?

Other than “Star Wars,” “Star Trek” and “Doctor Who” (the original series as well as the reboot), I wasn’t a huge sci-fi fan growing up. I certainly didn’t read sci-fi books. That felt like the dominion of the “male” complement in my family.

It was when I started writing that I became attracted to the genre and began to read anything I could get my hands on both in the YA and adult sci-fi areas. I spent several years reading everything from the more “classic” canon (Asimov, Philip K. Dick, Heinlein, Bradbury, Willis, etc) to some of the more recent writers (Nalo Hopkinson, N.K. Jemison, Ann Aguirre, Karen Lord, John Scalzi).

Margaret Atwood has also written some amazing dystopias in recent years, not to mention her classic The Handmaid’s Tale (McClelland and Stewart, 1985). While many agents and editors talk about the death of the YA dystopian craze since the Hunger Games and Divergent frenzy seems to be playing out, I still feel that dystopian narratives have a lot to tell us.

Emily St. John Mandel’s recent take on a dystopic future after a plague has killed off most of the earth’s population (Station Eleven) is a powerful contemporary musing on the nature of humanity, using a dystopian society in new and unexpected ways to achieve that end.

One of the things I like best about sci-fi is that it’s one of the most effective ways to ask foundational “what if” questions about human nature. Sci-fi writers can pick an element of our world and change it to ask “what would happen if [fill in the blank].”

For example, what would happen if …

a) society was divided into factions based on personality types?

b) criminals were released into the public with their skin stained different colors to denote their crimes?

c) technology became so advanced that we could no longer tell humans apart from androids?

d) the earth become so polluted or over-populated that humans needed to find a new home?

* Bonus points for naming at least one book/story that matches each of these descriptions. Suggested answers below.

The sky is not even a limit with sci-fi. Not only are these kinds of stories fun and engaging (if written well), but they also raise issues about who we are at the most fundamental level.

Taking as an example the popular conceit of humans colonizing another planet, not only can this narrative device play a “what if” role about the future, but it also may give us insights about the past.

What have humans actually done in the past when expanding their territories on earth and encroaching on lands inhabited by others, human and/or non-human?

Ray Bradbury plays this idea out on many levels in The Martian Chronicles, where the colonization of Mars and the Martian-human relationships can stand in for a variety of events that have already taken place within the confines of our own planet.

In my debut sci-fi novel for YA readers, Inside the Palisade, I pose the question: What would happen if men had been banned from society and women reproduced through an artificial insemination procedure using stored genetic material?

In this all-female society men have been demonized (literally referred to as “demen”) as the cause of a great apocalypse that has brought humanity to the brink of extinction. Teen protagonist (Omega/Meg) comes across a young man who has been hidden within the walls of the city, and he isn’t what she expected. She is forced to question everything she’s been told about the differences between men and women and ultimately learns the truth about why the men were blamed for everything that went wrong.

The men here stand in for the “other.” Because Caucasian men are typically not thought of as an oppressed group in a western society, the set-up is a non-threatening lens through which to confront issues of “difference.” The device can invite readers to think about oppression or victimization of others hopefully without the narrative seeming overly preachy or judgmental. It takes a weird situation that would likely never happen in real life (my “what if”), and use it to encourage readers to think about why we dislike or fear people who are different, why we sometimes think of others as “less than” ourselves.

Good sci-fi gives us the opportunity to turn a real world problem on its head, or at least look at it through a new prism, so we can encourage readers to think about it from a new perspective while telling an engaging and unusual tale in the process. I love all genres and am a very eclectic reader, but I have a special place in my heart for sci-fi because of the amazing perspectives it can bring to us all.

* (a) Divergent by Veronica Roth; (b) When She Woke by Hillary Jordan; (c) Do Androids Dream of Electric Sheep? by Philip K. Dick; (d) The Martian Chronicles by Ray Bradbury.

Enter to win one of three signed copies of Inside the Palisade by K.C. Maguire (Lodestone, 2015). Author sponsored. Eligibility: international.

3 thoughts on “New Voice & Giveaway: K.C. Maguire on Inside the Palisade”