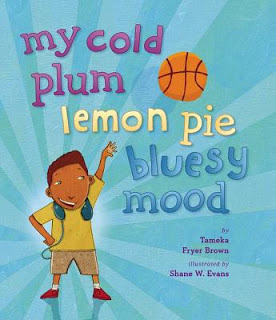 Human beings can be hard to satisfy, we writers included. Okay, me especially.

When I decided I wanted to be a children’s author, I worked really hard to learn how to write a manuscript that would be publishable. Once I sold a book, I wanted it to be well received throughout the industry, with lots of positive reviews. Then I wanted to sell another book, to prove that I wasn’t just a one-book-wonder.

Now that my second book (My Cold Plum Lemon Pie Bluesy Mood, illustrated by Shane W. Evans (Viking, 2013)) is officially on the market today, I want it to sell even better…and receive more attention…and win lots of awards…and…and…and….

Don’t get me wrong. It’s good to set goals for attaining higher and greater achievements, but all goals aren’t created equal. Here’s a practical epiphany I’d like to share, in hopes it may save somebody stressful moments and precious creative time.

Some authors are concerned about their work being confined to the categories of “literary” or “commercial”. I, too, have fretted over this. Though my writing voice leans toward literary, I really wanted to write something that would be viewed as the next kidlit sensation. I analyzed several of the picture book bestseller lists and, at the time, there were lots of subjects such as pirates and puppies and pink. My artistic soul whispered something to me softly, but my business-educated mind noisily crowded it out. If this is what’s selling, I surmised, then this is what I need to write. I opened my computer and got to work.

I wrote a story about monsters.

I wrote a story about bugs.

I wrote a story about a puppy.

I wrote a story about a princess, too, but I knew it was awful so I abandoned it early.

The others I sent to my agent—my pull-no-punches agent—who told me that none of these stories was working.

Technically they were well written, but something was missing. The thing that makes “a Tameka Fryer Brown story,” she said, was missing.

First, books don’t top lists just because of their topic; they top them because they widely capture the imaginations of children. Second, the creative process for every writer is different, and each must find what works for her. My best stories have always been organic, emerging intuitively and unbidden. My first book came to me in that twilight phase between sleep and wakefulness.

My latest book was inspired by the simple thought, “Boy, am I in a mood.”

In my deliberately crafted, market-driven stories, I’d tried to create tales that had heart, but they didn’t. Because they didn’t come from my heart. For art to be meaningful, that matters.

Does My Cold Plum Lemon Pie Bluesy Mood hit that sweet spot between literary and commercial?

Will it sell really well and make lists and earn awards?

But what matters most is that my authentic self is reflected in its thirty-two, beautifully illustrated pages, pages that will now be turned and enjoyed by little hands and minds. And that is beyond satisfying.

Enter to win one of two copies of My Cold Plum Lemon Pie Bluesy Mood by Tameka Fryer Brown, illustrated by Shane W. Evans (Viking, 2013). From the promotional copy:

What color is your mood?


On a really good day, Jamie feels purple like the first bite of a juicy cold plum.


And with a crayon in his hand, Jamie eases into a green feeling like a dragon dancing through a jungle made of green jello.


But when his brothers push him around and make fun of his drawings, Jamie feels graylike a dark storm brewing.


What will it take to put Jamie back in a bright-feeling mood?


Through Jamie, young readers will learn to describe how they’re feeling in a unique way.