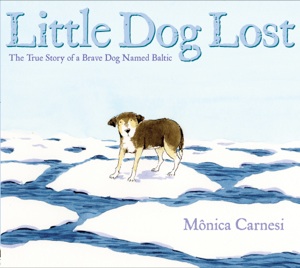 Mônica Carnesi is the first-time author-illustrator of Little Dog Lost: The True Story of a Brave Dog Named Baltic (Nancy Paulsen/Penguin, 2012)(blog). From the promotional copy:

On a cold winter day, a curious dog wandered onto a frozen river, and before he knew it he was traveling fast on a sheet of ice. Many people tried to help, but the dog could not be reached.

Finally, after two nights and seventy-five miles, the little dog was saved by a ship out in the Baltic Sea.

The gallant rescue of the little dog nicknamed Baltic made international news. Mônica Carnesi’s simple text and charming watercolor illustrations convey all the drama of Baltic’s journey. His story, with its happy ending, will warm readers’ hearts. An author’s note and map are included.

In October 2009, I attended the Rutgers One on One Plus Conference for the first time. I attended as an illustrator — my application consisted of samples of my artwork, and I was thrilled when I learned it had been accepted.

At every conference and workshop I’ve attended, my main objective has always been to learn as much as I can about the art, craft, and business of children’s book publishing, but at the One on One Plus, I had an additional goal: I was hoping to connect with an agent.

One of my New Year’s resolutions for 2009 was to promote my artwork and find professional opportunities to showcase my illustrations. With its customized format, in which attendees are paired with mentors (editors, agents, art directors, authors, illustrators), the One on One seemed like the ideal setting to get individualized feedback and advice.

Happily, I did meet my agent that day during one of the activities, the “Five on Five” session. There were five illustrators and five mentors at our table, and at one point they asked us to show our portfolios.

As a result, Teresa Kietlinski, an agent at Prospect Agency who was at the table, saw my portfolio and a month later contacted me to offer representation. That was a major step for me, but my “ah-ha!” moment happened right there at the conference when Teresa and I began talking.

As an illustrator and a visual thinker, I attempt to infuse my illustrations with a sense of narrative, but I’d struggled with the thought of myself as an author. While talking to Teresa about children’s books in general, about my background and my illustrations, she asked if I’d ever considered writing.

My first reaction would have been to say no, but that day I experienced what I can only describe as a feeling of possibility. It’s not that I had never thought about or tried my hand at writing before, but something about that conversation made it seem possible.

Throughout the day we’d heard speakers talk about the importance of challenging oneself, of experimenting and pushing limits. I spent the day interacting with other aspiring authors and illustrators and was feeling inspired as a result. That day marked a creative shift for me, one that has been challenging but also immensely rewarding.

My first picture book came about when I heard a news story on NPR in late January of 2010, an amazing and moving story: a little dog stranded on an ice floe in the Baltic Sea had been rescued by a scientific research ship and was now a member of the crew. The dog, nicknamed Baltic by his rescuers, had initially been spotted two days earlier floating on a piece of ice on the Vistula River.

When Illustration Friday, a weekly illustration challenge website, coincidentally proposed the theme “Adrift,” I knew what I wanted to paint: a little dog on an ice floe. Teresa, who by this point was representing me, saw the illustration on my blog and encouraged me to write Baltic’s story.

And I did — what might have remained only a visual interpretation of a single moment became a full-fledged story, with images and words combined in one of my favorite literary art forms: the picture book, my very own picture book.

And it all began when I attended that conference, met my agent, and had an “ah-ha!” moment.

As an author-illustrator, you come to children’s books with a double barrel of talent. Could you describe your apprenticeship in each area, and how well (or not) your inner writer and artist play together? Likewise, as an librarian-author, how do your two identities inform one another? What about being a librarian has been a blessing to your writing? How do you manage to also carve out time to write and build a publishing career? What advice do you have for other writers trying to do the same?

I am an author-illustrator, with a full-time job as a librarian at The Free Library of Philadelphia.

When I think of ideas for a picture book, I think in terms of images. That’s how it starts, but once an idea begins to take form, I move into the realm of words.

As an illustrator it can be easy to fall in love with a drawing or a painting — too easy, in fact. If an image does not advance the story, it will probably need to be altered or given up altogether, something that can be very difficult to do if you focus too much on the art.

At some point during the beginning stages of story development, I need to bring writing to the foreground. It’s a matter of balance. Making sure my inner writer and artist “play nice” together can be challenging, but it makes the moments when they are in synch so much more gratifying.

I’m originally from Brazil and did my undergraduate studies in Rio de Janeiro, where I grew up. I studied visual arts for a year before changing majors to pursue a degree in English-Portuguese translation. I loved art school but didn’t think I had enough talent to get a job after graduation. I also loved words and language, so switching majors to translation seemed to make sense.

After getting married and moving to the United States, I went back to school and got a master’s degree in library science. But art always remained a part of my life, and whenever I could, I would take continuing education classes in drawing or painting. Then, in the spring of 2006, I took a class called “Children’s Book Illustration” and realized what I wanted to do.

Working full time does complicate things a bit – after all, there are only so many hours in the day – but being a librarian has really helped me to grow in my second career. The old advice that to become a writer or illustrator one must read, read, read is absolutely true.

Working in a library has helped me immerse myself in children’s literature and be aware of what’s being published every year. I’m constantly borrowing books, reading reviews, checking publishers’ catalogs.

Writing and illustrating children’s books is, in a way, a natural extension of my day job. Finding the time to do both does require discipline and planning, and it can be very intense, especially when deadlines are looming.

For my first book, I used vacation time to work on the illustrations and stay on schedule. It’s not ideal and it’s not easy, and I’m still figuring it out. So, it’s a work in progress, but it’s been a great ride!

One thought on “New Voice: Mônica Carnesi on Little Dog Lost: The True Story of a Brave Dog Named Baltic”