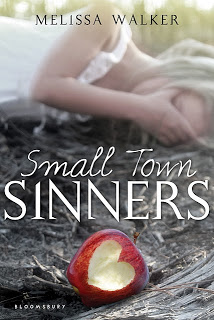 Writing my latest book, Small Town Sinners (Bloomsbury, 2011), was daunting. It tackles religion—always a touchy subject—and the whole story takes place in an Evangelical Christian town. The main character is the daughter of the children’s pastor, and she’s finally turning 16 and getting her chance to star in the church’s Hell House production.

In case you aren’t familiar with Hell Houses, here’s a rundown: They’re “haunted houses of sin” productions where the youth of the church act out various “sins,” like Gay Marriage, Suicide, Domestic Abuse and Abortion. At the end, you meet the devil before Jesus comes to save you.

It’s a self-proclaimed “scare-‘em-to-God” performance, and the ones I’ve been to seem to deeply affect both those involved and the audience who walks through them. (You can find more info here.)

However you feel about Hell Houses, they undoubtedly create discussion. And in Lacey’s world, they’re just what you do. At the start of Small Town Sinners, she has her heart set on the part of Abortion Girl—it’s the lead role.

Small Town Sinners is a far cry from my Violet on the Runway series (Berkley Trade), about a gawky, awkward girl who becomes a successful fashion model, and my last book—Lovestruck Summer (HarperTeen)—about an indie rock girl who falls for a country cowboy.

I worried that my readers would think I was being too serious, too weird, too… religious.

I knew that if I got the characters right, readers would follow them into the story even if they didn’t share the same belief system. I had to focus not on my characters’ “likeability” (which is something I often see discussed in reviews), but on their realness.

That shift—from creating a likable character to creating a true character (not that they’re mutually exclusive, just that I felt somewhat challenged to make Lacey both of those things)—made me wonder what other writers and readers thought about this.

Certainly we read and write characters we don’t “like” all the time—people we wouldn’t want to be friends with, people who deceive or cheat or hurt others, or people who are just plain annoying, because real people run the whole range of the likable scale, right on down to despicable.

While this topic was top of my mind, I had the following exchange with Youth Services librarian Kelly Jensen, who blogs at Stacked.

Melissa: I’ve been thinking a lot about “likability” in characters, and I have to admit to myself that–especially as a teen–I wasn’t that likable. I was self-involved and often able to compartmentalize and ignore serious things. But do we expect more of YA characters than we do of our real-life selves? I think I do in my books, somehow. Is that fair?

Kelly: It’s something worth thinking about from the adult and teen perspective too. I wonder how much teens think about the likeability of a character versus how much they’re invested in the story. Do they worry as much about whether they like a character or are they more invested in knowing people like that exist and they’re either someone like them or like someone they know?

Kelly’s comment got me thinking about how I read, both as a teenager and now, and I came to the conclusion that as long as I relate to the characters in some way—if I can see some inner part of myself or my friends or my world in the pages, even if much of the book is foreign to me—I’m in. So there’s a truth I’m looking for that trumps the likable factor.

I’d love to hear from readers and writers on this topic—what if a character isn’t likable? What makes you invest your time and emotions in them anyway?