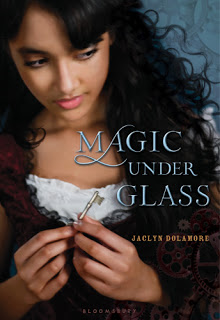 Jaclyn Dolamore is the first-time author of Magic Under Glass (Bloomsbury, 2009)(blog). From the promotional copy:

Nimira is a music-hall girl used to dancing for pennies. So when wealthy sorcerer Hollin Parry hires her to sing accompaniment to a mysterious piano-playing automaton, Nimira believes it will be the start of a better life.

In Parry’s world, long-buried secrets are about to stir. Unsettling rumors begin to swirl about ghosts, a madwoman roaming the halls, and Parry’s involvement in a group of corrupt sorcerers for whom the rules of the living and dead are meant to be broken for greater power.

When Nimira discovers the spirit of a dashing fairy gentleman is trapped within the automaton, she is determined to break the curse. But even as the two fall into a love that seems hopeless, breaking the curse becomes a perilous race against time. Because it’s not just the future of these star-crossed lovers that’s at stake, but the fate of the entire magical world.

I’d always thought of characterization as one of my writing strengths—I have some characters I’ve been writing about for 15 years, and at point they feel almost like family—but the first version of Magic Under Glass was planned, written, and revised in less than three months. I thought it was the best thing I’d ever written, and sent it out to a number of agents, and got a lot of requests, but no sale. Many of the rejections cited lack of character development as a reason.

“How could this be?” I thought. “Characterization is my strength!”

Well, so, I learned an important lesson that you can’t take your strengths for granted. Just because I had characters that seemed fully fleshed in other stories, that didn’t automatically rub off onto everything I would ever write. Seems obvious now, but at the time it was an embarrassing revelation.

I knew what a good character was supposed to look like. Their world feels real, like you could open their closet and there would actually be stuff in there, not a movie set where it’s all façade. I care about them off-screen. But I didn’t have 15 years to figure it out.

I’m not a professional artist (and would never have the patience to be one), but one of the first ways I develop any character is to draw them. I’d done a few sketches of the main characters, but they didn’t look consistent—maybe a clue that they weren’t consistent in the manuscript either. I started to reconsider the look of the characters—looking through 19th century portrait photography for inspiration—and sketched them in different poses and expression, working out their clothes and moods. This helped give them some bones, but they still needed meat.

I turned to what felt a bit like a quick and dirty trick—filling out some of those Internet surveys that ask things like “do you have any pets?” and “what are you most afraid of?”–answering some questions for all the main characters. Usually when I try this, their answers are all over the place at first, and I’m wracking my brain to figure out what to say, but somewhere along the line I start to get a feel for what the basics of their personality are.

This is not a favorite tactic of mine—in the future, I learned to start thinking of the characters in my next project before I have time to write it so they can develop more organically—but it works in a pinch.

Perhaps most important of all was making sure all the characters played the proper role within the story. I had received comments that Nimira, the protagonist, wasn’t stepping up and taking charge of the scenes and driving events.

At first I didn’t really get it. Nimira wasn’t a sorceress or a kick-butt type, she was an ordinary girl in a bad situation, and I couldn’t imagine her taking charge, but that was what everyone seemed to want. It was only when I began to develop her character that I realized it wasn’t so much that she needed to blow into scenes with a machine gun, but that I needed more moments when she decided to make a hard decision, and I needed her to grow and change as a result of these decisions.

Nimira wasn’t the only one to receive this treatment—I had to go back and reconsider all the roles of the main characters in the story and give them all a growth arc. It took time and thought. There were some frustrated moments where I wondered how I’d managed to write this book at all—I hardly seemed to know these people! And I felt like I never would. But in the end, the work was certainly worth it when I got an agent and she sold the book in quick succession with the final, sweated-over draft. 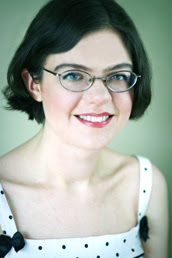 I first started querying in 2005 with my first novel manuscript, a contemporary fantasy called “Selkie Rock.” A friend of mine had urged me into querying and provided me with her research list, which was several dozen agents, their addresses, and some notes about what they liked or were looking for she’d dug up through interviews, etc.

Things were pretty different even just five years ago. Fewer agents took e-queries, and information was harder to find.

At first I was super-nervous. My boyfriend practically had to shove me and my envelopes out the door. I worried about things like whether the agent would think I was unhinged if my stamp wasn’t straight.

But within a few days, I got a request for a partial, which led to a very nice personal rejection. (The universe must have been smiling on me with that one—I didn’t get another personal rejection for a while, but at least it was a good way to kick things off.)

I actually came to enjoy querying. I’d been writing all my life, but querying made me think in a new, career-minded way. Once I started querying, I also started writing every day, setting goals, finishing projects, and planning ahead—the skills I would need as a professional.

I made some mistakes with the agent search process. I queried very widely. I did have a few rules—obviously they had to be a legit agent that didn’t charge fees, but they also had to have at least one YA sale. Sometimes I couldn’t find much information on an agent, so I assumed if they offered I’d just ask questions and figure it out then. I also sometimes queried agents even if I’d heard hints of a red flag about them. Some of the agents I heard bad things about also made a lot of sales. I figured they must be working for someone.

That’s probably true, but in hindsight, I should have been more cautious. I hate rejecting people and confronting them, and I was–like most unpublished authors–so hungry for the legitimacy of having an agent and the sale. If I had ended up with an offer from an agent that I wasn’t sure about, I’m afraid I probably would have said yes, and dithered around forever in ending the relationship even if it wasn’t working.

Luckily, I never had to find out. I sent out queries steadily for three years, with three different books—not even including three different versions of Magic Under Glass.

Jennifer Laughran of the Andrea Brown Agency was a new agent that had started taking clients while I was revising Magic Under Glass, and I had her in mind immediately as I was working on it. Her taste in books was really compatible with mine, and although she was new, a lot of my friends were with agents at Andrea Brown and I had heard nothing but good.

So she was actually my top choice when I sent Magic Under Glass back out. When she offered, I was shocked and thrilled, but it also felt…kind of right. She was my top choice not because she had all the hot deals on Publishers Marketplace that year, but based on sound reasons why she was right for me. I did get two other offers, but my gut said Jenn from the start.

So if I had to do it all over again, I would focus on a smaller group of agents, and not query anyone I had reservations about. I didn’t realize until after I had an agent just how important it is to have one that you can trust with a wide range of questions and problems, not just someone who gets your work on an editor’s desk.