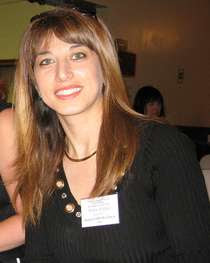 I thought I’d talk today about the challenges of writing a multicultural story in picture book form, and tomorrow Ned Gannon will talk about his own experiences illustrating Time to Pray (Boyds Mills, 2010).

When I wrote Time to Pray, I wanted to capture the essence of a culture in the 32-page format. The challenge wasn’t the word count as much as it was deciding which cultural aspects to include and which to leave out.

Muslims in the Arab and Islamic world hear the call to prayer from their local mosques five times each day. Children in non-Muslim countries don’t hear that.

The idea for the book came from my childhood. I grew up in Kuwait in the area known as the neutral zone, which is between Saudi Arabia and Kuwait.

The mosque in that area was too far from my house. On occasion when the wind blew in a certain direction I could hear a faint call to prayer.

When I visited my grandmother who lived closer to downtown Kuwait, it was fascinating to hear the call to prayer. The mosque was across the street from my grandmother’s house, and the muezzin’s voice rang loud and clear. Each time the athan started, my grandmother would stand up in honor of the mention of God.

I get the same feeling of awe when I pass by a church on a Sunday and the bells are tolling. It’s just a unique feeling that I wanted to capture in a book for young readers.

That’s when the tricky part started. There were too many components to the story: the call to prayer, the names of the prayers, when they occurred during the day, the ritual washing.

Taking the young age group that the book is meant for into consideration, I decided that the names of the prayers were too complicated to pronounce and were totally unnecessary to the story, so I included them in an author’s note.

With the story idea crystallized, I still needed a suitable starting point. I decided on the universal theme of the love between a grandmother and her granddaughter, Yasmin. 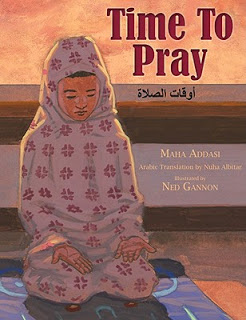 Time to Pray is the story of so many young children in America whose grandparents live in other countries. I wanted that multi-generational love to span oceans and continents and also to tell a story of this unique moment when Yasmin realizes she needs to practice for what would become a lifelong commitment to praying five times daily.

This is the story of every Muslim child, regardless of origin, and this is why there is no mention of Yasmin’s country of origin.

Cultural accuracy, a universal theme, choosing the information to include or leave out, word count and telling a story with a light hand while steering clear of didactic themes as well as thinking of what would potentially work as illustratable moments all had to come into play for Time to Pray to come to fruition. Now that’s a mouthful.

I was so lucky that the illustrator for Time to Pray was Ned Gannon. Ned captured the essence of the world of the story and highlighted the nuances of the culture beautifully. He brought the characters to life and showed how a typical Muslim grandmother dresses differently while at home from while out in public. I’m hoping readers appreciate the gorgeous oil paintings that brought the book to life. 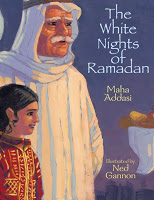 From Maha’s site: “If anything is a common language between children of the world…it’s candy! The White Nights of Ramadan is about a candy festival that goes on for three nights in a row in the middle of Ramadan. The festival called Girgian (Pronounced gur-gee-ANN) is celebrated in this book that shows a fun tradition, through children’s eyes.”

Peek: “…what I wanted to show was that Ramadan is not a month of suffering, but a month that holds beautiful meanings of sharing and interacting with family and friends.” Note: includes childhood photos and interior illustrations.

See also a Cynsations interview with Ned on Time To Pray.