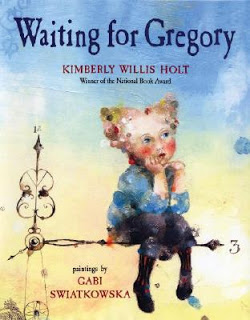 Writing for different age groups wasn’t a calculated decision. It just happened. I never thought I’d write a picture book or a series for young readers.

When I created a scrapbook filled with the moments waiting for my nephew to be born, I started to think about how they might also be an interesting subject to explore.

The only problem was I set the entire story in a hospital waiting room, leaving no room for picture opportunities. It took me nine years to get it right.

My other picture books have come to me like my novels–a voice with a first line. For me, that’s the key.

That’s also what led me to write the Piper Reed series (Henry Holt, 2007-). “I’ve lived everywhere,” the voice said. I followed the voice, and it brought me to a story.

I’m an auditory person. The voice and dialogue of my stories usually comes easier for me. Adding the visual details is not as easy. Picture books remind me that visual details matter (even if the illustrator is the one providing those).

Short stories are my first love, and I’m a little sad that I don’t spend as much time writing them these days. Although I think the novel is where I’m most suited, I’ll will always dream that one day I’ll be known as a decent short story writer.

But even my short stories that were published were novel-like. They took place over more time than I think a fine short story should. So, maybe writing short stories made me realize I should stick to novels.

There are certainly advantages to sticking to the same kind of book. Folks come to expect a certain type of story for a certain age group and the writer delivers.

But that’s not the kind of writing life I want. Thank goodness I write for a publisher that has allowed me to explore outside of the box.

When I turn in a complex novel, I can’t tell you how refreshing it is to focus on Piper Reed. I owe my sanity to that character.

The downside to writing for different ages is that, after almost 12 years of being published, there are still a lot of people out there who don’t know my name. I think some of that has to do with my exploring different forms. That being said, I wouldn’t have it any other way.