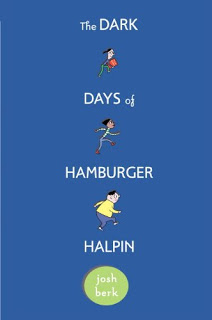 Josh Berk is the first-time author of The Dark Days of Hamburger Halpin (Knopf, 2010). From the promotional copy:

Being a hefty, deaf newcomer almost makes Will Halpin the least popular guy at Coaler High.

But when he befriends the only guy less popular than him, the dork-namic duo has the smarts and guts to figure out who knocked off the star quarterback. Will can’t hear what’s going on, but he’s a great observer.

So, who did it? And why does that guy talk to his fingers? And will the beautiful girl ever notice him?

Those who prefer their heroes to be not-so-usual and with a side of wiseguy will gobble up this witty, geeks-rule debut.

I spent a few years as an avowed plunger, repeating mantras like: “If I am not surprised by what happens next, how will the reader be?” It was fun, but my writing was unfocused and more or less plot-less. The readers were not surprised because there were no readers. I wrote colorful sentences and snappy dialogue, but there was no compelling story and my queries were rejected.

And then I had an idea (after a weird dream and a “Law & Order” marathon) for a YA mystery. I wanted to write a book about a deaf student who spies on his classmates and solves a murder at his high school. And I knew nothing about writing a mystery!

So I did some research, read some “how to write a mystery” books and essays. And they all advised plotting carefully. They advised that I outline and plan ahead in order to best plant clues, create plot twists, and create a suspenseful and interesting plot.

It was foreign to me at first, writing with an outline, but it certainly helped me, and now I can’t write without one. It’s certainly no coincidence that the first thing I wrote with an outline became the book that landed me an agent and eventually was published!

I don’t have a particular title on the craft to recommend, but if you’re struggling with plot, it’d be great to read a book on how to write a mystery, even if you’re not a mystery writer. There are tips to be found in mystery plotting that could benefit anyone writing a novel.

(I also recommend watching a lot of “Law & Order.” Especially SVU. I like Detective Munch.)

I’m not just a librarian, I’m a second-generation librarian! My parents were both librarians. I’m 100% librarian. But when I graduated from college (with a degree in Political Science of all things) I had no interest in the field.

What were my career goals? I don’t even remember. I think I wanted to be a rock star or maybe a hobo. But I ended up taking a job at a library just because it fell in my lap through some connections my parents had.

I worked as a desk clerk for a while and then ended up going to graduate school. I got a Masters Degree in Library Science from the University of Pittsburgh.

While at Pitt, I took a course on young adult literature. I was dimly aware of the YA scene before then, but quite a lightbulb went off when I took this class. I had been dabbling at being a writer, mostly articles and stories, but I had one almost-book-length manuscript in the drawer about a group of high school kids trying to buy beer. I thought it was too inappropriate to be for young people and felt like you never read adult novels about high school kids.

But then, for my YA class, I read Rats Saw God by Rob Thomas (Simon & Schuster, 1996). In the first scene, the main character is planting marijuana seeds in the dirt of a houseplant in his guidance counselor’s office. It was like “Wow, anything goes in YA!”

Plus, the whole book was funny and angsty and interesting in all the ways that I wanted my writing to be. Then I read people like John Green and Blake Nelson and Louise Rennison and Francesca Lia Block and so many authors who were doing wonderful things in YA. I felt like it was precisely where I wanted to go as a writer.

After finishing library school and working at the library, I started to think seriously about becoming a YA novelist myself. Those first few attempts did not go anywhere. The book that became my debut novel was my third book-length manuscript. And it’s not quite as edgy as I originally thought I’d be, but I was deeply inspired by all those authors I read in library school (and continue to check out of the library every day).

So, what I’m trying to say is that my entire career as an author sprang directly out of being a librarian! I make no effort to separate the two identities. They’re part of the same package.

It’s been great to be plugged in to the literature scene as part of my “day job” and being a writer has certainly made me a better librarian. It’s a cool day job. Being a librarian is so much better than being a rock star. Or a hobo.

Josh Berk is the author of The Dark Days of Hamburger Halpin (Knopf, 2010) and a second comedy/mystery teen novel coming from Knopf in 2011. He has previously been a journalist, a poet, a playwright, and a guitarist (mostly in bands known for things other than fine guitar-playing). He is a librarian and lives in a cornfield in Allentown, Pennsylvania; with his family.