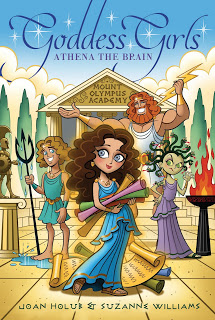 Suzanne: The Goddess Girls series began with a conversation over dinner. Joan asked if I might like to collaborate on something. I agreed, and about the time Rick Riordan’s Lightning Thief (Hyperion, 2005)–the first book in his Percy Jackson and the Olympians series–debuted, we were putting the finishing touches on the proposal for Goddess Girls.

It took a while for Aladdin to decide to buy our proposal, which is a tween series loosely and humorously based on myth and starring four major goddessgirls: Athena, Persephone, Aphrodite, and Artemis (whom we originally named “Diana” until our editor pointed out that though “Diana” is the better-known name for this goddess, it is her Roman name.)

Our lovely leading ladies attend fictional Mount Olympus Academy, where the commanding yet bumbling Zeus is principal, and where hunky godboys like Ares and Hades, add an element of light romance.

Joan [her bookshelves include two rows of mythology titles]: 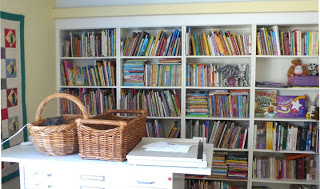 Writing about tweenage Greek goddesses and gods was a blast. We tossed our egos out the window and mercilessly rewrote each other’s work until the series began to sound as if one author had written it.

We discussed some things up front: Should all details about clothing, food, settings, etc. be clearly rooted in Ancient Greek times, or could we incorporate a few modern elements? How should our characters speak? Should all character names come from mythology, or could some names be made up? What magical elements could we introduce and still keep to the spirit of Greek myth?

Suzanne: We decided to make things easy for our age 8-12 readers (and ourselves!) by having our goddessgirls and godboys speak like “regular kids,” with an occasional god-worthy exclamation thrown in. (“Yegods!” “Godness!”)

Other challenges we solved as we went along.

In very early drafts of Book 1, Athena the Brain, Athena communicated with her friend Pallas by shellphone, and packed lots of books when she left her Earth home for Mount Olympus. 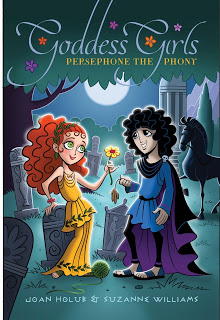 And in a trip to the Underworld in Book 2, Persephone the Phony, we had Persephone encountering two clipboard-wielding brothers whose job it is to keep track of the new souls entering.

Though we wound up keeping some modern elements (there’s a filing cabinet in Zeus’s office, and an intercom), we eventually disposed of the shellphone, changed “books” to scrolls or papyrus sheets, and got rid of the clipboards.

Mostly, we tried to give readers the flavor of Ancient Greece without overwhelming them with too many unfamiliar or unwieldy details. In keeping with Ancient Greece, our goddessgirls wear chitons, our godboys, tunics. But the foods they eat in the school cafeteria are fanciful creations like yambrosia (a stew), and nectaroni and cheese.

Joan: The myths themselves suggested the personalities of our characters and helped us plot our stories. Athena is the goddess of wisdom, among other things, so she’s the brainy goddessgirl. An over-achiever in fact, who tries to juggle too much (cheer, extra-credit projects, a big course-load) in order to keep up with the other amazing goddess girls and godboys she meets at MOA (Mount Olympus Academy).

Since the Persephone of myth divides her time between Mount Olympus and the Underworld, it made sense to us that her personality might reflect those places, and that she might struggle to meld the sunny and not-so-sunny parts of her nature.

As God of War, wouldn’t you expect Ares to be a hothead? And who else but Poseidon would create a Waterworks Park for a school project? 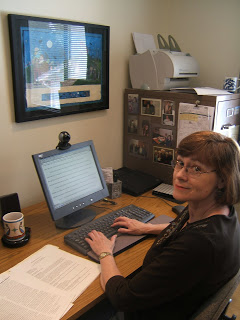 Suzanne [pictured here in her office]:

Eventually, we decided that all character names should be taken from Greek mythology. Even for minor characters we tried to choose names that seemed appropriate. Ares’ two buddies are Kydoimos (Confusion) and Makhai (a general name for spirits of battle). And the two (twin) brothers working in the Underworld are Hypnos (God of Sleep) and Thanatos (God of Death).

And those bits of fun magic we wanted to add to our series?

Keep an eye out for an animated makeup brush, a holographic-like beast-hunting game, spells to instantly change a hairdo or send messages zooming from one place to another, and much, much more.