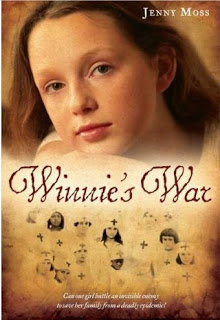 Jenny Moss is the first-time author of Winnie’s War (Walker, 2009). From the promotional copy:

A debut novel set against the backdrop of the Spanish Flu epidemic of 1918.

Life in Winnie’s sleepy town of Coward Creek, Texas, is just fine for her. Although her troubled mother’s distant behavior has always worried Winnie, she’s plenty busy caring for her younger sisters, going to school, playing chess with Mr. Levy, and avoiding her testy grandmother. Plus, her sweetheart Nolan is always there to make her smile when she’s feeling low.

But when the Spanish Influenza claims its first victim, lives are suddenly at stake, and Winnie has never felt so helpless. She must find a way to save the people she loves most, even if doing so means putting her own life at risk.

Could you tell us about your writing community–your critique group or partner or other sources of emotional and/or professional support?

The PB/MG/YA writing community is awesome. I know writers who write for adults–they don’t seem to have the same supportive community that we do. This lack of extreme competitiveness is surprising, especially considering there are only a few book “slots” available each year. But I’ve found that PB/MG/YA writers want to help one another. That made my journey (i.e., struggle) to get published bearable and even enjoyable! And it has made the publishing process more fun.

I joined SCBWI in 2003. Through SCBWI, I found two wonderful critique groups.

The first was a group of writers I met at the national conference in LA: All talented writers and good critiquers. We lived in different places, so worked through e-mails, snail mail, and the occasional conference call. 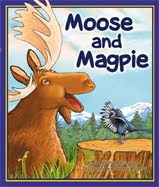 My second critique group was right here in Houston. I met Mary Ann Hellinghausen at a regional conference, and she invited me to join her critique group. The Yellow House Writers was led by the amazing Joyce Harlow and was so named because we met in Joyce’s house and it was yellow. Joyce is an awesome researcher–she spent the night in an underground WWII bunker in Estonia when she was researching one of her books–and is a gifted writer. She served us hot tea in china cups and guided us through many meetings. Another member of the critique group was Bettina Restrepo, who is represented by the Dunham Literary agency.

Through the SCBWI discussion boards, I found Verla Kay’s Website for Children’s Writers & Illustrators, nicknamed “the Blueboards.” I lurked for a while, way too shy to post. I learned so much about the publishing business from Blueboarders, especially the submissions process. Eventually, I began posting, and now I’m a moderator. I’ve met many many writers through that board. I encourage other shy lurkers to start posting on the Blueboards. There’s a warm, welcoming community there.

Through the Blueboards, I learned about the LiveJournal community. No way did I ever think I would have the courage to start a blog. But I did and found many writer friends. It broadened that community for me even more.

Through LJ, I got to know Jackson Pearce. She started the Debut 2009 LJ community (“the Debs”), which is a group of MG and YA authors debuting in 2009. We do some marketing, but are mostly a social group. The ongoing support and community of that group has been amazing. We’re going through a similar experience. If a Deb has a question, one of the other fifty of us is bound to know the answer! Or be able to find out!

When I first became involved with SCBWI, I had the very mistaken impression that being involved in a writing organization was the only way to get published.

While I didn’t think personal contacts would get me a publishing contract, I did hope that one-on-one critiques with editors would result in a closer look at my manuscript, as compared to the slush pile experience. But after all the conferences and critiques, I ended up getting pulled out of slush anyway!

What I did get from the conferences, critiques, SCBWI, the blueboards, and LJ: a community of other writers. And now after all this talking about that community, I’m at a loss for words in trying to succinctly describe its importance to me. But I’m very appreciative of it and thankful for it.

I’ve had so much going on in my life this past year, it’s been difficult to properly promote my book. I’ve had to pass up some opportunities (e.g., Internet venues, interviews, contacts with teachers and librarians) because of the craziness of life. But I do think there are so many marketing options for writers right now, even if I’d had more time, I couldn’t have done it all!

Winnie’s War was released on February 3, 2009. The following Saturday, I had a launch party at my local B&N. A friend had designed a postcard invite for me. I’d paid Kinko’s to print up 300 invites and mailed them out to mostly friends, but also to a few teachers and librarians in the area. Many friends came–one dressed in 1918 garb, dropping off cookies and lemonade, and bringing their friends. A reporter from a local paper took pictures. A high school friend I hadn’t seen in thirty years surprised me and showed up! I talked to many kids about my book. Adults were interested in the research I did. I thought I’d be too nervous to have fun, but it was a wonderful wonderful day.

We sold out of books, which made my CRM happy. But it felt more like a party than a book signing to me. I highly recommend debut authors having a launch party.

What I learned was what Elizabeth Bunce had told me before the party: Have a party–your friends and family want to celebrate with you.

Each of the Debs posted an interview with me on her (or his – we have boy Debs) blog or LJ. I also did some non-Deb interviews, a couple for local newspapers. I hired a website designer and worked with him to get up a site.

I am enjoying the process so much. This is what I’ve always wanted to do. I’m having a blast.

My advice would be to make friends with other writers. Come out of your shell. Reach out to others. Join groups. All of it does take time, but it is definitely definitely worth it.