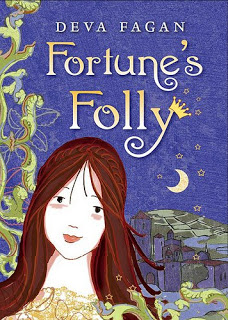 Deva Fagan is the first-time author of Fortune’s Folly (Henry Holt, April 14, 2009). From the promotional copy:

Ever since her mother died and her father lost his shoemaking skills, Fortunata has survived by telling fake fortunes. But when she’s tricked into telling a grand fortune for a prince, she is faced with the impossible task of fulfilling her wild prophecy–or her father will be put to death.

Now Fortunata has to help Prince Leonato secure a magic sword, vanquish a wicked witch, discover a long-lost golden shoe, and rescue the princess who fits it.

What inspired you to choose the particular point of view—first, second, third (or some alternating combination) featured in your novel?

For a long time I was committed to only writing in a tight third person point of view. I had an inexplicable prejudice against first person all the way back in elementary school, when I distinctly recall turning my nose up at books written in first person for being “weird” (and I wouldn’t even consider first person present tense!). It was like a literary version of refusing to eat vegetables!

Fortunately I grew out of that phase, helped by the realization that first-person books could be really, really good. Suddenly I was reading books like Ella Enchanted by Gail Carson Levine (HarperCollins, 1997) and The Thief by Megan Whalen Turner (Puffin, 1998) and Catherine, Called Birdy by Karen Cushman (HarperCollins, 1994). I also discovered Brussels sprouts can be absolutely delicious; it all comes down to finding the right recipe.

I was still dubious about writing in first person, however. So when I originally got the idea for a book about someone telling a fake fortune and then needing to make it come true, I turned to good old third person. That novel failed, miserably. I couldn’t find the main character, and the story died after a chapter or two, and I went on to other things.

Then about a year later I decided to give it another try. I had signed up for NaNoWriMo, so I was ready for a challenge! I had started to recognize that my writing process generally involves coming up with a plot element first, and that my greatest weakness is in jumping ahead and trying to write a story before I have the character truly vivid and alive in my mind. I hoped that maybe giving my character her own “voice” right from the start would help with that.

I plunged into the story on Nov. 1, and within about five weeks, I had my completed first draft. It was a thrilling experience to write so quickly; the novel felt “alive” in a way nothing I’d written before ever had. There are certainly plenty of vivid, intense, lively stories written in third person, but for me, giving first person a chance was the key to finding the heart of the character, and thus the book.

It just goes to show that we shouldn’t be afraid to break out of our established and comfortable patterns to try new things, because we just might be rewarded by a whole new world of inspiration. 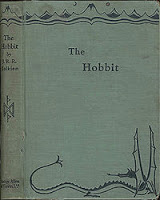 I’ve loved fantasy ever since my mother read me The Hobbit [by J.R.R. Tolkien (1937)] and the entire Lord of the Rings trilogy [also Tolkien, 1945-1955)] aloud during our long summer car-trips to visit relatives.

There’s something about the fantastical that plugs into my deep-dwelling archetypal sense of story. As such, it is almost always the place I turn to first for both my own entertainment and as the vehicle to communicate my own ideas.

But I don’t think early exposure to hobbits and dragons and elves is the only reason I love fantasy. Fantasy is, paradoxically, the easiest way I can find to explore and try to understand human nature.

I see fantasy as being an extension of the earliest myths and legends told by humanity and passed down through the generations. I respond to it on a more intense, soul-kindling level.

Scholar Joseph Campbell puts it well when he says “Myths are the world’s dreams. They are archetypal dreams and deal with great human problems. Myths and dreams come from the same place. They come from realizations of some kind that then have to find expression in symbolic form.”

My theory is that human beings like patterns. We like to find elements or symbols that are repeated and reinterpreted, because they help us make sense out of a mysterious and frightening world. Myths and fairy tales serve as a set of building blocks, almost like a language itself, to communicate about those deep truths of human nature.

Sometimes in order to try to understand the big questions, we need to do so in a language of metaphor or parable. If the stories we tell are too close to our real world, we may not have the perspective and freedom to ask why there is evil or what is true heroism.

I think we can use the trappings of fantasy to move a story into that more mythic dream-realm, a fabulous reality that isn’t exactly like our own world, but which we can learn from and be inspired by.

In his essay “The Flat-Heeled Muse,” Lloyd Alexander puts it wonderfully when he says “Sometimes heartbreaking, but never hopeless, the fantasy world as it ‘should be’ is one in which good is ultimately stronger than evil, where courage, justice, love, and mercy actually function. Thus, it may often appear quite different from our own. In the long run, perhaps not. Fantasy does not promise Utopia. But if we listen carefully, it may tell us what we someday may be capable of achieving.”

And lest I dwell too much on serious stuff, I must admit that I find fantasy to be just plain fun! There’s just something about magical realms, fantastical creatures, and perilous quests that stir my heart. To be a little (okay, a lot!) corny, it’s like magic…

Other readers will find their strongest “magic” in realistic modern settings, or historical mysteries, or spy thrillers. But for me, it’s the dragons and the wizards.