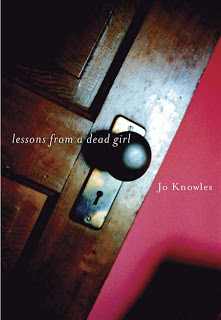 Jo Knowles on Jo Knowles: “I grew up in a small town in New Hampshire along with a menagerie of pets and people. I was never much of a reader, convinced I wasn’t any good at it. My sister, on the other hand, read constantly and could sometimes be persuaded to read out loud. I still hear her voice when I read old favorites to my son.

“It wasn’t until high school that I really fell in love with the magical act of reading to yourself–of entering the pages of a book wholly and completely, and living it. I finally got what it was all about.

“After college I went on to earn a master’s degree in children’s literature and I currently teach Writing for Children in the M.A./M.F.A. program at Simmons College. I’m also a volunteer writing mentor at a women’s prison in Vermont.

“By day I’m a freelance writer, but I try to work on my fiction whenever I can.” Visit Jo’s LJ and MySpace page.

Could you tell us about your path to publication, any bumps or stumbles on the way?

Oh, there were countless bumps and stumbles for sure, but honestly I wouldn’t trade a single one. I took the long way and enjoyed (mostly) the view. Of course, this is all in retrospect and I’m sure if you’d found me lost on one of those back roads that seem to be going nowhere five years ago, I’d have answered much differently. But the truth is, I learned so much from every “wrong” turn, I really don’t think I would change a thing.

Congratulations on the release of Lessons from a Dead Girl (Candlewick, 2007)! What was your initial inspiration for writing this novel?

The idea came to me when I was at my old day job, writing a booklet about child abuse prevention. I came across an article about kids abusing kids. I was fascinated, and began to think about some of my own childhood friendships.

I don’t think it’s true that all children choose their own friends. It certainly wasn’t always the case for me. I began to wonder why some friends behaved the way they did–how a person could be so kind and cruel at the same time. And why? I started writing that night.

What was the timeline between spark and initial publication, and what were the major events?

I think I probably finished the first draft sometime in 1997 or so. Then I revised and started submitting. The second place I submitted to held onto the manuscript for two and a half years. After that, I felt I’d lost focus and put the manuscript away for quite a while. When I finally decided to work on it again (in 2004, I think?), I shared it with my friend, Cindy Lord (author interview). She suggested that I submit the first ten pages to the PEN New England Discovery Award. I did, and to my shock, I won!

What that meant was that the manuscript was submitted to Candlewick! Happy end of story! (And one more confirmation of Cecil Castellucci‘s ten-year theory.)[Cyn Note: Miss Cecil’s theory is that it takes ten years to become an “overnight” success; read an interview with Cecil.]

Lainey’s journey required her to go back to the beginning of her friendship with Leah and revisit all those memories she’d suppressed. But for her to keep having flashbacks or memories was cumbersome and felt too contrived. I finally decided to just tell the story in chronological order, making that opening chapter when Laine learns the news a prologue. That setup really freed me.

The hardest scene to write was the confrontation at the end of the book. It wasn’t until the last round of revisions before I sold the book that I finally got the girls to both say the truth out loud.

I have Holly Black (author interview) to thank for that. She was generous enough to read the manuscript after hearing me talk about how stuck I was. I knew my being stuck had to do with not going deep enough, not getting close enough to the truth, but I couldn’t figure out how to do that. Then Holly said one phrase and everything clicked. Thanks, Holly!

I read your novel on the road, arguably amidst various distractions (including an eye injury, which meant I shouldn’t have been reading at all!). But I couldn’t stop. The story is tremendously affecting. In writing with such depth, did you find your emotional state fluctuating along with Laine and Leah’s? Cyn Note: the eye is better now.

Oh, thanks Cyn. And I’m sorry about your eye! This was a hard story to tell, for sure. I came to know both characters so well, and with each draft I felt I uncovered another layer of depth and understanding about each of them.

I knew the story before I really understood why each girl does the things she does. And so, to figure that piece out, I had to keep revising and uncovering. It was as if they were both holding back on me, only giving me a little bit with each draft.

When I finally got to the bare bones truth and fully understood their stories, it was with both relief and great sadness.

What scared you the most about writing this story?

Discovering my characters’ truths and saying them out loud.

What kept you going and raised you up during the process?

Reminding myself of the books I love that don’t take the easy way out: Books by Robert Cormier, E.R. Frank, Chris Lynch, Laurie Halse Anderson and others. I’ve always wanted to be as honest as they are, no matter how hard it is.

I think it’s easy to start worrying about how well your book is doing or whether or not you’ll get good reviews, or make the important lists, or any number of other things that are out of our control. But all that stuff is so minor compared to hearing from a teen who read your book and told you it made her think, made her feel like someone understood her. That’s what it’s all about.

You’re a member of the Class of 2k7, an innovative joint marketing effort by first-time youth literature authors. Could you tell us about your experience with the group? What else have you done to promote your new release?

The Class of 2k7 has been a wonderful experience. I’ve made a lot of friends and learned so much about how to survive your first year as an author.

As far as my own promotion, I’ve booked signings, spoken at conferences and visited classrooms and reading groups. The best part of having a new book out is getting to meet lots of wonderful people who love books.

If you could go back and talk to your beginning writer self, what advice would you give her?

The road will be long and there will be times when you’ll believe that you will never make it, but don’t give up. Enjoy every turn the road takes. Meet as many people as you can along the way. Be kind. Listen. Work hard. Push yourself. Tell the truth no matter how hard it is. Don’t rush it. Keep writing. Be humble. Be grateful. Be generous. Enjoy every minute!

I sold my second novel to Candlewick and I believe it will be out late 2008 or early 2009. The title is Jumping Off Swings, and it’s about four teenagers and how their lives change in unexpected ways when one of them finds out she’s pregnant.

2 thoughts on “Author Interview: Jo Knowles on Lessons from a Dead Girl”