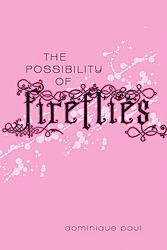 Dominique Paul grew up in a Maryland suburb just outside of Washington, D.C., and received her BA in English from the University of Maryland, College Park. Currently, she lives in Los Angeles, where she will be directing an upcoming film based on her first novel, The Possibility of Fireflies (Simon & Schuster, 2006). She is also at work on her second novel, as well as a series of young adult books intended for the small screen. Visit Dominique at MySpace!

Could you tell us about your path to publication, any sprints, bumps, or stumbles along the way?

Bumps, stumbles and setbacks, oh my! I finished my novel in 2002 but didn’t even find a proper agent to represent it until 2004. Once I got an agent, the book sold rather quickly–in February 2005. But everything happens for a reason because if I’d sold the novel right away, I never would have turned it into a screenplay and who knows where I’d be now.

Congratulations on the release of your debut novel, The Possibility of Fireflies (Simon & Schuster, 2006)(excerpt)! What was your initial inspiration for writing this novel?

It had been bubbling up in me for a long time, then one day I finished eating my breakfast, sat down at my laptop and wrote chapter one. Literally. I didn’t know where I was going, but I knew there was something banging on my insides that wanted out. So I just kept writing. The end result surprised me as much as anyone.

What was the timeline between spark and initial publication, and what were the major events along the way?

Let’s see, the initial spark was sometime in 2001, I believe, although I’d secretly wanted to be a writer my whole life. It just wasn’t something I’d ever said out loud.

It took me about a year and a half to write it. Then I sent it out and was immediately rejected by five different agents. The Lovely Bones had just come out and everyone said my novel wasn’t dark enough. I was so discouraged. I didn’t know anyone in the publishing world.

I did know a guy who was a TV agent though, and he suggested I turn the novel into a screenplay so he could get me work as a TV writer. I took his advice, and while the script didn’t sell either, I began pitching all over town, which –as anyone who’s ever done it can tell you– is a lot of work. So my novel sat neglected for two more years.

Finally, I got aggressive and convinced my screenwriting agent to help me find a book agent. I got a few more passes before I finally found Diane Bartoli. She suggested we try to sell it to the now savvy YA market. We did, and the book sold within a few weeks. There was even a bidding war! It was a dream come true.

Interestingly, I sat down to write a very different novel. I wanted to write a sort of Elvis–Priscilla kind of love story from the Priscilla point of view.

But when I sat down to write, this really sad little girl kept rearing her head. Ellie. She was just…the truth. Over and over again. It became apparent that for a child to want to run off to God knows where with a man who is waaay too old for her, things would have to be pretty bad at home. So I just kept opening myself up to what “pretty bad at home” would mean.

I lived Ellie everyday for a year and a half, and then again for a year as I worked on the screenplay. Now, I have to go make the movie! I had no idea what I was getting myself into. She is so vulnerable, so lonely and yet so completely wonderful. I just love her. But it’s hard to write her because everything cuts her so deeply.

Why did you decide to set your story in the 1980s? What was it about that time that made it a good fit?

I’ve always loved the juxtaposition of humor with emotional intensity. There’s something about that that really turns me on. And let’s face it–the 80’s are a really funny time period. We didn’t think so at the time. There was such an innocence to the way we looked at things like Hair Metal back then. That’s why it’s so awesome. Because everyone was just genuinely like “This rocks!”

It’s only now, in hindsight, that it’s friggin’ hysterical. Anyway, I just loved the idea of this really sad story layered over this hilarious, somewhat ridiculous era. And it’s even more ironic that the characters don’t even see the humor in it. They’re all just livin’ it with their lighters in the air! It’s so honest.

How has the book been received? Did any of the responses especially surprise, vex, or delight you? If so, please fill us in!

I have had wonderful reviews! I am so lucky. My favorite was when someone said the book “felt more like it grew than it was written, like it came into being through its own sheer force of will.” I cried when I read that. Because that’s exactly how it was. I didn’t want to write this book, I had to. That person really got it and it meant the world to me.

The only negative anything I’ve gotten was from someone who posted on Amazon that they just didn’t care about the character (Ellie), which I found odd. But that person also went on to give away the ending so I guess that says a lot about them. She doesn’t even warn you about the spoiler either. She just flat out ruins the ending. It’s unbelievable.

If you could go back and talk to your beginning writer self, what advice would you give her?

Oh. I wish I could give her a big hug! It was such a tiny flame at the time. So much fear and insecurity. My advice to her would be to do exactly what I did: to drown out the negative voices until the voice that says “Go, go, go!” is the loudest one you hear.

The voices of fear and insecurity never went away, they just eventually got drowned out by that little drill sergeant inside of me that said “Just shut up and write!” So yeah–make the voice of yes the loudest. And accept your schizophrenia. Ha ha!

Well, despite the drama and the setbacks, I will be directing the movie version of The Possibility of Fireflies in 2008.

Currently I am working on another YA novel, this time focusing on a father/daughter relationship.

I am also doing a series of YA novels that have a fantasy element that we hope to turn into a series for television. It’s about a group of misfit girls who go away to summer camp and discover that they are super heroes. I’m all about the girl power.

One thought on “Author Interview: Dominique Paul on The Possibility of Fireflies”