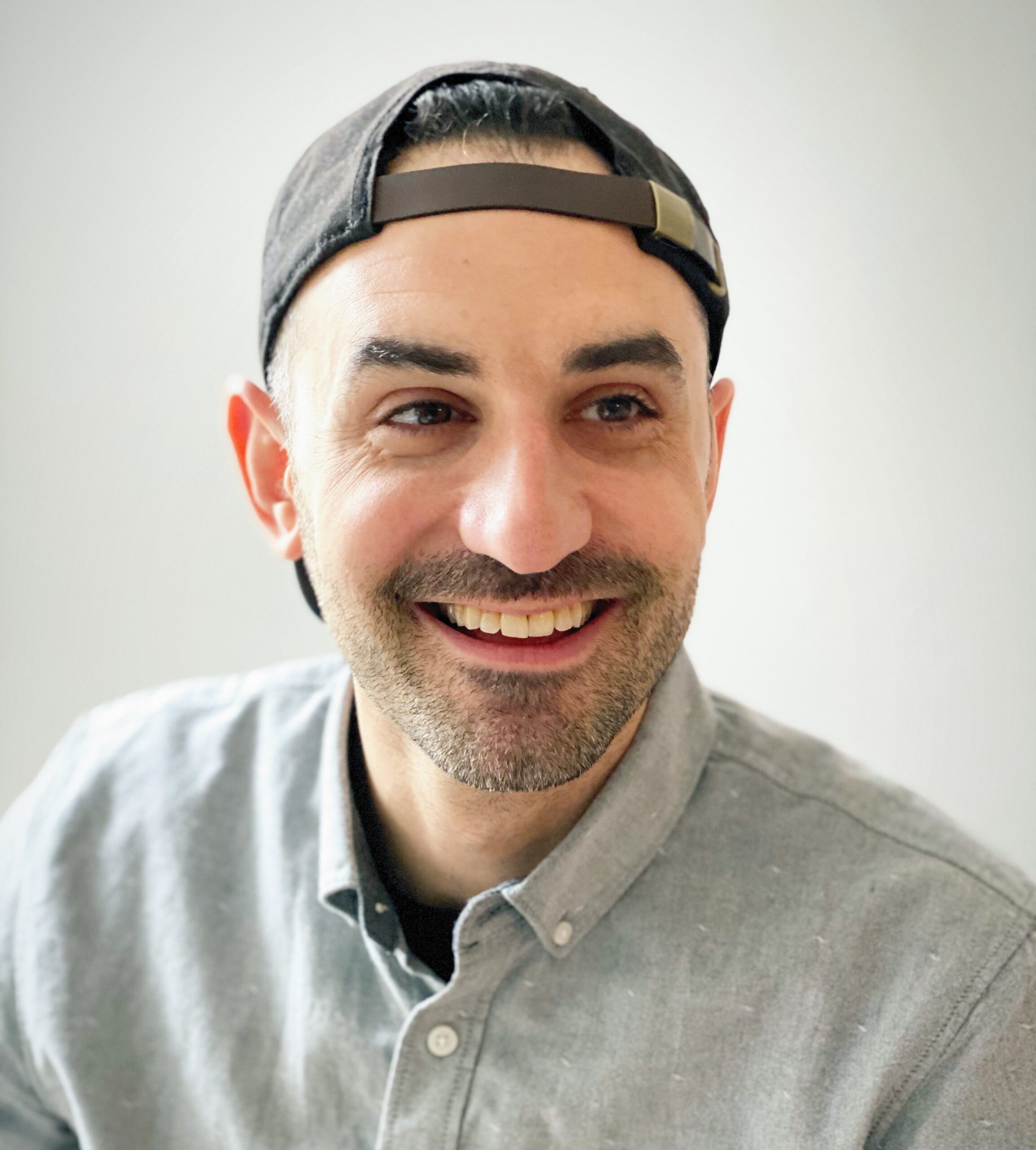 When I first met Jarrett Lerner, Book 1 of his series EngiNerds (Aladdin, 2017) was just coming out. Since then he’s completed the series and has been busy writing/illustrating early chapter books, graphic novel chapter books, activity books, and has a novel in verse and early readers coming down the pike. Phew! When does he sleep?

Jarrett, I really enjoyed your humorous middle grade series Enginerds (who doesn’t like a farting robot?) and your chapter book series, Geeger the Robot (Aladdin, 2020). But different genres bring different challenges and obstacles. Please share with us your process and interest in chapter books.

Let’s start with what appeals to you about writing chapter books? 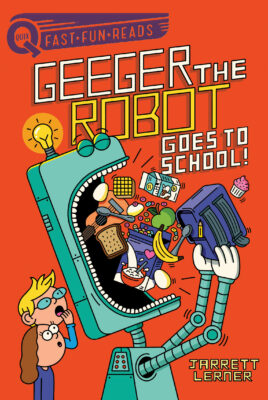 A lot of things! But one of the big things is the readers—chapter books are such an important part of so many kids’ reading journeys. They’re often responsible for introducing kids to longer-form stories, and many times, they are the first books that kids read on their own. Getting notes and/or pictures from proud parents and excited kids about how one of my books was the first they ever read all by themselves—there’s nothing like that. It’s a very special thing.

What do you see as the craft challenges of writing in this format?

I think a lot of people look at these books and think they are simple, in a negative way—that it’s like a novel, but “dumbed down” or something. But that couldn’t be further from the truth. I think the worst thing you can do—in any kind of writing you do—is underestimate or otherwise patronize your readers. Kids are smart. And often, the best chapter books are taking advantage of that and, further, helping make them even smarter. Sure, chapter books might have fewer words, fewer pages, less complicated language and sentence structure—but that “simplicity” and economy can be used to tackle tricky situations and complex relationships. And I think doing that can sometimes be far, far harder than writing for older audiences. So I’d say doing that is one of the unique challenges of these kinds of books.

You’ve written several series, Enginerds and Geeger the Robot, with more to come. What is your approach?

I make sure to consider both the readers who might be coming to the series in the middle of things (starting with, say, Book 4 instead of Book 1) and the readers who might be reading the books in chronological order. I want to introduce the former readers to the characters—but not bore the latter readers. And for those readers already familiar with the characters and the world I’ve built, I want to keep things comfortably familiar while also pushing things and challenging them a bit. Sometimes, I think of it like a sitcom.

You know how, if you’ve got a favorite show, as soon as you hear the opening theme song or see a character step on screen you get this sense of calm, of comfort, of coziness? I want to give my readers some of that, but also not put them to sleep by repeating jokes or storylines. I want to give them something new, too, and usually I try to achieve that by further developing the characters, or at least by showing an aspect of them that the previous books haven’t fully explored.

What advice do you have for others interested in writing chapter books?

Read. Read tons of them. As many as you can. And read full series, too. Or at least get a taste of a full series.

Like, sit down and maybe read Books 1, 2, and 3 of a series, then maybe jump to Book 7 or 8 (if the series has that many) to see what’s going on. What’s changed? What’s remained the same? And make sure to read both the books that appeal to you and the books that you know lots of kids can’t get enough of (if those two kinds of books don’t perfectly overlap).

What’s next on the horizon for you?

Lots of things. I like to keep busy! I’ve got more chapter books coming out (at both the shorter and longer end of the chapter book length spectrum), as well as more of what my publisher calls “graphic novel chapter books” —which are 100-something page graphic novels with short portions of text included here and there (sometimes just a single line, occasionally a full page). I’ve also got some early readers coming out, a middle grade illustrated novel in verse, and some other stuff that straddles the line between chapter book and middle grade.

Jarrett is also the creator of the forthcoming illustrated novel in verse A Work in Progress (Aladdin, 2022), a forthcoming set of early readers, and more. All of Jarrett’s books are published by Simon & Schuster. In addition to writing, drawing, and visiting schools and libraries across the country, Jarrett co-founded and co-organizes the #KidsNeedBooks and #KidsNeedMentors projects. He can be found at jarrettlerner.com and on Twitter and Instagram @Jarrett_Lerner. He lives with his wife and daughters in Massachusetts. 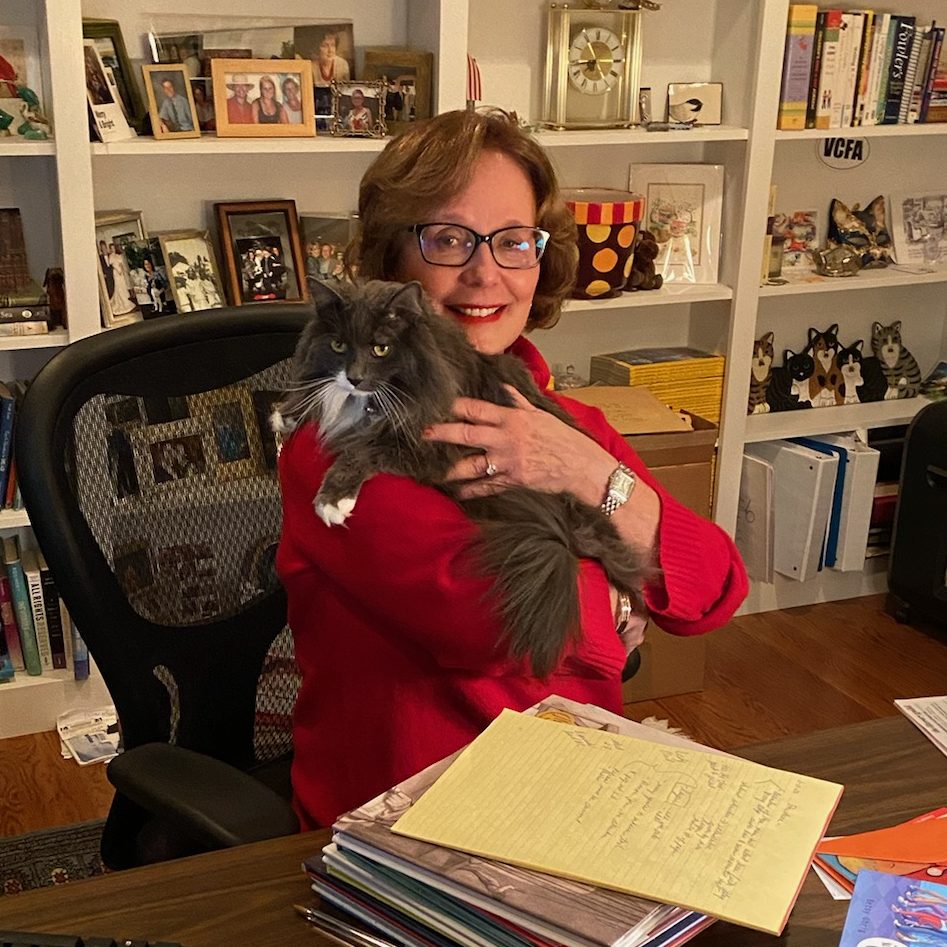 Helen Kampion writes poetry, picture books, and middle grade novels. She has published stories in magazines and written nonfiction articles for The National Children’s Book and Literacy Alliance (NCBLA, thencbla.org) where she serves as Treasurer.

In addition to an MBA from Boston University, Helen holds an MFA from Vermont College in Writing for Children and Young Adults. She also founded the “In a Nutshell Short Story Award” at VCFA to encourage tight, focused writing.

As an Army child, Helen was born in England and lived in Germany, Japan, California, Virginia, and Florida. She now lives with her husband and two cats (her “mews”) in Massachusetts. When she is not scribbling away, you will find her curled up with a book, a cat, and a nice hot cup of tea.