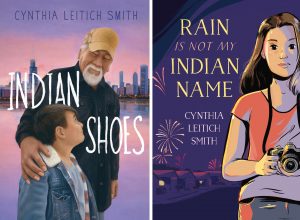 What an honor it’s been to revisit my first few books and to re-envision them for today’s young readers:

I’m especially delighted that Indian Shoes and Rain Is Not My Indian Name are both ebook and paperback editions, which will make them more affordable. The ebook edition of Indian Shoes is already newly available and the rest will be published Feb. 9, 2021. (The hardcovers are also still available, for those who prefer them.) Jingle Dancer will be made available in paperback, too.

My gratitude to the whole team at Heartdrum as well as to all the teachers, librarians, booksellers, inclusion activists, and Native and non-Native families who celebrated and shared these titles—mostly through word of mouth—through the years, especially during the lean time after the “multiculturalism” conversation and prior to the “diversity” conversation in children’s-YA books.

Most of all, I’m grateful for these books’ young readers—the earliest among them (who’re perhaps having kids of their own), those yet to come, and everyone in between.

The stars of the Indian Shoes paperback and ebook editions are both Cherokee illustrators—Sharon Irla, who created the new cover art, and MaryBeth Timothy, who created the new black-and-white interior illustrations. Because the fictional heroes of the short story collection (Ray and Grampa Halfmoon) are Cherokee-Seminoles, it was especially fitting that these Cherokee artists’ perspectives be brought to the book.

The love between grandfather and grandson shines in Sharon’s art, and it’s so important that the cover really communicates to young readers the fact that the characters are living in a city—in this case, Chicago.

Urban Native people make up more than 80 percent of our intertribal population, yet that reality is rarely reflected in children’s books.

Likewise, MaryBeth’s interior art is simply charming, affectionately winking to the text while adding layers, and I’m especially pleased that her illustrations included a Native little girl character and an auntie. Her affinity for the setting, culture, and intergenerational relationships clearly informed the work.

“As I was reading about the wonderful interactions between Ray and his grampa, I could see the characters coming to life in my mind. With each chapter, they became more and more real to me. By the end of the book, I felt like I knew Ray, Grampa, Aunt Wilhelmina and Uncle Leonard like they were part of my family. The wonderful stories made it easy to imagine each scene.” (See illustrator insights for more thoughts about her specific art pieces.)

As for the writing, it was interesting how little of the chapter book text changed. The author’s note is the most significant revision.

Revisiting the text of Rain Is Not My Indian Name (HarperChildren’s, 2001)(Heartdrum, 2021) was a much more extensive process. Upon initial publication, it was important to me that it feel very modern in large part because contemporary depictions of Native teens, especially Native teen girls, were so rare. Consequently, the text felt more quickly dated.

The story reflected technology of the time, the early 2000s—it was one of the first books to integrate a website—and it also integrated then-current dynamics around marginalized identity elements.

A lot has changed since then, and I tweaked the text to reflect that. Examples include more younger Indigenous characters skewing to using the term “Native” even though their elders may default to “Indian,” capitalizing “Black” in reference to Black people, cutting a few ableist terms in everyday speech, and tweaking the sensibility around gender. Society has evolved and so has what’s now authentic “voice.”

The technology also got a major overhaul—“tape recorder” to “voice recorder;” the rise of cell phones; “telephone lines” are now “power lines;” and so on.

Finally, I took a more direct approach to communicating a few cross-cultural interactions. When I was writing the novel, the prevailing wisdom was that books should err excessively away from teaching, that we always could trust kids to know what was right. As a new author in the late 1990s/early 2000s, I was more inclined to defer to industry and critical expectations. In 2020, I’m less optimistic that everyone gets it. So, I brush-stroked in more clarity in a scene or two where it might be useful and illuminating.

All that said, I somehow resisted the urge to delete the whole novel and start over. Yes, I’ve grown enormously as a writer in the past two decades. Revisiting my early work was a deeply humbling process. But this exercise wasn’t about the book that I could write now. It was about making the book I wrote then still resonant to kids of today.

So, never mind that if she’d kept aging in real life, Cassidy Rain Berghoff would be in her 30s now. We know from her re-emergence as a secondary character in Hearts Unbroken (Candlewick, 2018, 2020) that she’d only aged two years on the page during the past seventeen years anyway.

That said, the headline news of the repackaged Rain Is Not My Indian Name is that evocative cover by Métis illustrator Natasha Donovan. She did a wonderful job of capturing the spirit of the protagonist—her quiet thoughtfulness, quirky humor, and trusty camera.

Rain is shown at night, against her small-town backdrop. I remember first seeing the art and tearing up as I thought, “Oh, I remember you. There you are.”

“This project was a cover update, so the art director (David DeWitt) and I worked together to come up with something with a more contemporary feel. My work started with reading the book, highlighting any important imagery and trying to get a sense of how to best convey the spirit of the story. We already knew we definitely wanted a portrait of Rain with her camera, and once I read the book, a backdrop of fireworks seemed like the right move.

“Fireworks are a reference to some important moments in the story, but they’re also a way of representing the explosiveness of loss (both in its wild grief and its unexpected, breathless joy). This decision informed the palette as well; I knew I’d need colours that would transport readers into a slowly-cooling summer night filled with the smell of smoke and the sounds of far-off revelry.

“Once the art director and I decided on a composition that we were happy with, I was able to go ahead with inking (digitally, on my iPad) and colouring (in photoshop, using a graphics tablet). At this stage all of the details had been nailed down, and my focus was on Rain—getting her posture and expression just right. I thought a lot about Rain’s story and my own recent experience with grief, hoping to get the art to portray both brokenhearted vulnerability and newly-found strength. For me, this stage is largely instinctual, and it involves a lot of fiddling and then forcing myself to step away and come back later. One of the unexpectedly difficult parts of any illustration is deciding to be done!”

The refresh of Jingle Dancer (Morrow, 2000)(Heartdrum, 2021) reflected a lighter touch than the other two. In the main text, “videotape” became “video.”

We kept Cornelius Van Wright and Ying-Hwa Hu’s lovely illustrations but used a new font for the title. The author’s note was also updated, offering more current context for grownups to share with young readers. Cornelius and Ying-Hwa said:

“It is hard to believe it has been 20 years since Jingle Dancer was published. We are so grateful to have worked with and got to know Cynthia.  We are so happy that another generation of children will be able to  read and share Jingle Dancer.”

I hope that the new readers of these books feel that depth of connection and that returning readers know how much I’ll always appreciate them.