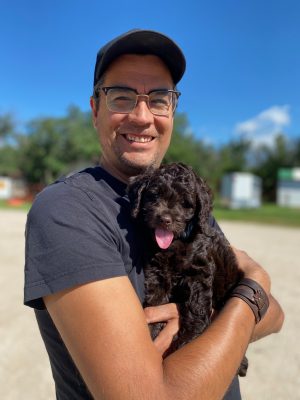 David A. Roberton‘s latest release for young readers is The Barren Grounds (The Misewa Saga, #1)(Puffin, 2020). From the promotional copy:

Morgan and Eli, two Indigenous children forced away from their families and communities, are brought together in a foster home in Winnipeg, Manitoba. They each feel disconnected, from their culture and each other, and struggle to fit in at school and at their new home — until they find a secret place, walled off in an unfinished attic bedroom.

A portal opens to another reality, Askí, bringing them onto frozen, barren grounds, where they meet Ochek (Fisher). The only hunter supporting his starving community, Misewa, Ochek welcomes the human children, teaching them traditional ways to survive.

But as the need for food becomes desperate, they embark on a dangerous mission. Accompanied by Arik, a sassy Squirrel they catch stealing from the trapline, they try to save Misewa before the icy grip of winter freezes everything — including them.

Congratulations on the release of The Barren Grounds (The Misewa Saga, #1)(Puffin, 2020). The marketing description references both traditional stories and C.S. Lewis‘ The Chronicles of Narnia (HarperCollins, 1950-1965). Could you share with us how your vision for the series developed?

It’s a story that I’ve been thinking about for a long time. Originally, I’d planned it as an older skewing story. If you read The Evolution of Alice (Highwater, 2020), my first adult novel, there’s a story in that book where the ghost of a young woman stares endlessly at a blank ceiling full of tack holes. I don’t explain how the young woman died, or where the tack holes came from, but I had the backstory in my mind. In fact, I think I had a whole story written for the novel that didn’t make the cut. 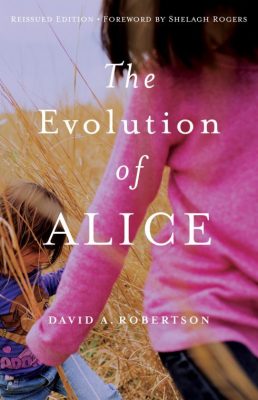 At any rate, the backstory was two foster sisters who escaped the difficulties of their placement by pinning pictures to the wall and finding that those pictures opened into realities for them. So they could escape.

At some point, I decided to take that concept and reimagine it for a younger audience. But writing about the foster care system is something I’ve always wanted to do. I’ve also wanted to adapt these amazing Cree stories of the sky, rich stories that have important messages, and that are incredibly engaging and beautiful. One of them was about the fisher, and how he sacrificed himself to bring warmth to a land that had been cast into an eternal winter. And how he became what western society calls The Big Dipper.

There were parallels there with Narnia, and because I wanted to write a middle grade fantasy in adapting this particular sky story, I found great inspiration in the Narnia series. I loved taking classic literature and reimagining it through an Indigenous lens. So much so that a picture book I have coming in two years is inspired by a classic picture book (but I can’t say much about that right now). At any rate, all those things came together to develop The Misewa Saga.

How did you approach worldbuilding?

I’m not sure I approached this any different than I would for another novel. I looked at the world the characters were inhabiting, both on earth and on Askī, and began to think about what would make those worlds seem authentic to the reader.

Living in Winnipeg, it wasn’t all that hard to write about the city. It was more, in the “real” world, making sure the characters rang true. The situations they were in rang true. What they say, how they react, their personalities, all of that.

For the other reality, I had to have an idea of the history. Not only so I would know about the world I was writing, but also because I knew the history would come into play not only for The Barren Grounds, but even more so as the series continued. So I had to know why the White Time had been thrust upon the North Country, all the events leading up to the present day that Morgan and Eli find themselves in. I had to know the villages that are in the North Country, what they look like, who lives there.

I used a lot of traditional Indigenous communities when imagining Misewa. The longhouses they live in are kind of like what a longhouse would look like in real life. Really, for Morgan to reconnect with her identity as a Cree girl, I needed for the lives of the beings in Misewa to be reflect Cree values, ways of living, etc. Mapping it out was important as well, knowing where they needed to go now and in future books. Drawing out characters and their backgrounds so I knew what they looked like, how they talked, how they acted. So, it was just this painstaking process of creating something that had never existed before, even though real elements went into that creation.

What were the challenges (research, writing, logistical, personal) in bringing the story to life? 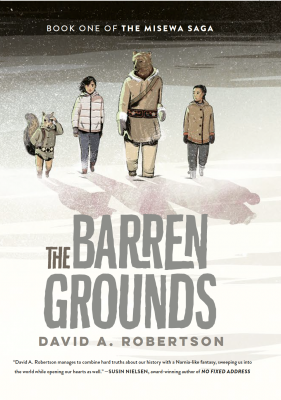 I had already done a lot of research in the area of Cree stories about the sky. I re-read The Chronicles of Narnia and other middle grade classic literature. So none of that was really challenging.

To me, the biggest challenge was finding a way to integrate all the different elements into a cohesive, engaging story. So, taking the foster care system, Cree legends, classical literature, environmental protection and land stewardship, colonialism, cultural reconnection, all of that and more, and making it all work together seamlessly. That was the most challenging part of writing this novel, and I think along with that was learning how to write middle grade. Because each form of literature requires a different sort of storytelling. So I was trying to incorporate all these elements and learning how to write in a different way all at once.

What were the joys of it?

It’s always an immeasurable joy to create. When you write a story, when you finish it, it’s this incredible fulfillment that you can’t really feel in any other situation. For The Barren Grounds in particular, it was writing the characters and figuring out their journeys, how they would interact within their environments, and getting it just right. So that they all were authentic, distinct, and empowered.

I found such joy in writing Morgan specifically, because her journey is so emotional, difficult, heart-wrenching, relatable, and vitally important. I never forgot that a Cree kid might read this story, and how would Morgan and Eli make them feel? To see characters, heroes, that looked like them. That gives me a great amount of joy.

A series is a big commitment! Why did you decide to embrace it rather than write a stand-alone book? 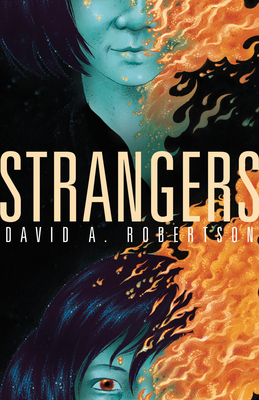 I love the challenge of writing a series. I did it already with my YA trilogy, The Reckoner (Highwater, 2018-2019). I loved writing stories that could stand-alone, but also worked to contribute to a larger narrative. To create a bigger world. To expand that world. I love finding ways to challenge myself as a writer. And honestly, in the end, for what I had planned for Morgan, Eli, and Misewa, it was too much for just one book.

I could write about these characters and this world for many, many books, and I hope it goes beyond the planned trilogy. But for the story I want to tell, this three-book series will wrap up their arcs. There’ll be no cliff hangers at the end of book 3 (so don’t worry!).

You are a highly accomplished writer with tremendous range. You’re successfully published in prose and graphic format as well as a huge range of age markets. What do you enjoy about each, and what transferable craft skills do they offer you?

I’ve been lucky enough to find success in the forms of literature I’ve written in so far in my career, but I don’t take any of that for granted, and I never think anything like “I’ve arrived.” I’ll always challenge myself, I’ll always try new things, I’ll always push myself. That’ll never change, as much as it won’t change that I’ll always write about Indigenous people. Because those stories are important.

I’m honored that you’re among the contributing authors to Ancestor Approved: Intertribal Stories for Kids (Heartdrum, 2021). Could you tell readers a little about your short story and how you decided what to write about in a book that features a myriad of perspectives interconnected by setting?

I liked having to write a story that fit into a larger narrative. I liked finding ways to connect my characters to other characters that you see more of in other stories. It was really fun.

Again, in this story, I write about a foster kid who has been disconnected from his family, community, and culture. And again, I try to show how that disconnect has impacted him, and how empowering it is for him to reconnect to his culture.

While it’s a completely different story than The Barren Grounds, there are elements that are similar. So, Brothers was a fun story to write, it was a touching story to write, and I hope that people enjoy reading it, and the whole anthology, which has stories in it from so many talented Indigenous writers. 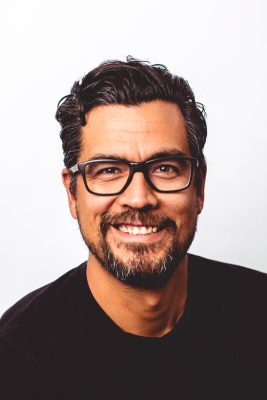 David A. Robertson is the winner of the Governor General’s Literary Award, the Beatrice Mosionier Indigenous Writer of the Year Award and the John Hirsch Award for Most Promising Manitoba Writer.

His books include When We Were Alone, illustrated by Julie Flett (Highwater, 2016)(winner of the Governor General’s Award, a finalist for the TD Canadian Children’s Literature Award and a McNally Robinson Best Book for Young People); Will I See? illustrated by GMB Chomichuk (Highwater, 2016)(winner of the Manuela Dias Book Design and Illustration Award, Graphic Novel category); the YA novel Strangers (Reckoner 1)(Highwater, 2018)(recipient of the Michael Van Rooy Award for Genre Fiction); and Monsters (Reckoner 2)(a McNally Robinson Best Book for Young People).

Through his writings about Canada’s Indigenous Peoples, Robertson educates as well as entertains, reflecting Indigenous cultures, histories and communities while illuminating many contemporary issues. David A. Robertson is a member of Norway House Cree Nation. He lives in Winnipeg.