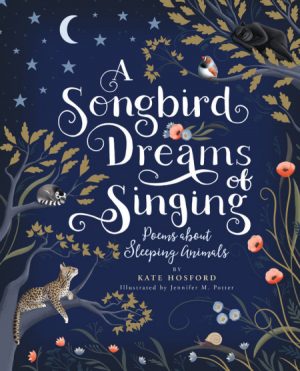 Poems about sleeping animals are delightfully specific. Did a particular encounter inspire this collection?

A few years ago, I read Sy Montgomery’s book, The Soul of An Octopus: A Surprising Exploration Into the Wonder of Consciousness (Atria Books, 2015). Her investigation into the intellectual, emotional and physical world of this creature was unlike any book I had ever read, and by page two, I was hooked.

I wrote to Sy and asked if I might talk to some of her contacts at the Boston Aquarium. Instead, she offered to have me join a group of friends who were visiting the aquarium to meet the octopus who had been named after her! Spending time with the aquarium staff, Sy the human and Sy the octopus was really inspirational. I went home and started researching immediately. 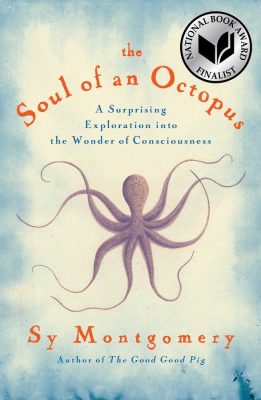 Despite my enthusiasm, I had trouble finding my own voice once I started writing. My poems sounded either overly serious or trite, and I felt I was not doing justice to this incredible animal.

Eventually, I stopped writing octopus poems. But in the course of my research, I had learned that octopuses can dream. Not only that, they can even change colors while dreaming!

This made me wonder what sleep habits other animals might have. Soon I had discovered all sorts of interesting animal sleep habits, and the poetry flowed more easily.

However, I purposely left the octopus out of this collection in case I return to those poems at some point.

I love the intersection of poetry and science! Can you tell us about your research process? Which animal facts surprised you? Were there animals you thought might work, but that didn’t end up in the book?

This was my first foray into nonfiction, and I quickly learned that much of the information I found online was inaccurate. I eventually started getting almost all my information directly from scientists themselves. After reading about male zebra finches who practice their songs while dreaming, I reached out to the Daniel Margoliash laboratory at the University of Chicago to learn more about this research. The lab put me in touch with Sofija Canavan, a wonderful MD-PhD student who answered my questions about zebra finches and about animal sleep in general.

It turned out that animal sleep was not only a fascinating topic to research, but also an area where some of the discoveries were quite recent. For instance, in 2016, Dr. Niels Rattenborg at the Max Planck Institute for Ornithology discovered that frigate birds can fall fully asleep for a few seconds while flying! A whole new world opened up to me; I was spending my time looking at diagrams of antennae positions for sleeping ants, writing to Duke Lemur Center about ancient lemur migration, and consulting experts in Namibia about the length of a giraffe’s nap. The most wonderful part was that almost everyone wrote back quickly with helpful information.

One of my most exciting contacts was with Jon Ablett, the senior curator in charge of mollusca at the Museum of Natural History in London. I had contacted Jon to gather information about a famous snail who took a four-year nap after accidentally being glued down to a display in 1846.

When I was in London last month, Jon gave me a behind-the-scenes tour of the museum in which I saw the shell of the famous snail, dozens of specimens that Darwin had collected, and my book waiting to be filed in the museum’s mollusca library. 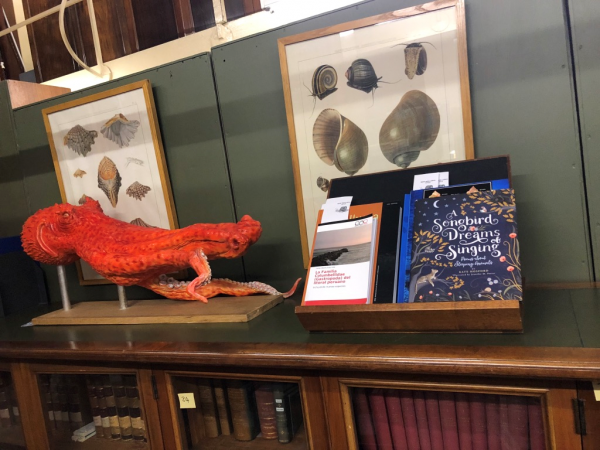 Almost every fact I learned about animal sleep surprised me. I honestly didn’t know any of them: otters hold hands while sleeping, queen fire ants may be able to dream, ducks sleep with one half of their brains at a time, sperm whales sleep vertically…the list goes on.

One poem that did not make it into the book was entitled, “Does Cuttlefish need a Cuddle?” I also eliminated a poem about meerkats, who sleep in a pile. It would have been a very cute illustration, but the poem was not the best.

How does the writing process for a poetry collection differ from other books?

In this case, it was even more complicated since it was a nonfiction poetry collection. My process was to research one animal at a time. After a certain amount of research, I would get the itch to start writing a poem. I used many different poetic forms in this book: pantoums, triolets, roundels, rhymed couplets, and few forms I made up myself. I gave some thought to how the form suited the subject matter. For instance, for the poem about queen ants who dream, I chose the pantoum, which sounds very dreamlike, due to the constant repetition of lines.

Can you talk about the editing process for this book?

It was definitely harder for me to write the prose than the poetry. My excellent editor, Allison Cohen, patiently helped me distill these paragraphs and my author’s note through several rounds of editing. The other challenge was weeding through a great deal of scientific information, and corresponding with sixteen to twenty different scientists, while revising the poems. We also had to decide on an order for the poems that made sense. We decided to go from the largest to smallest animal so that there is a decrescendo throughout the collection that is commensurate with sleep.

What do you love about Jennifer M. Potter’s illustrations?

Everything! Jennifer was the perfect illustrator for this project. Her artwork is dreamy and atmospheric, with the most gorgeous palettes. I’m hard pressed to choose a favorite illustration, but I do have a particular soft spot for the otters holding hands, and the whales sleeping vertically.

I also love the cover, which is highly decorative, with its stunning design and shiny gold leaves. I hope it will inspire many people to open up the book and see what’s inside.

Kate Hosford graduated from Amherst College with a degree in English and Philosophy. Before becoming an author, she worked as an elementary school teacher, a social worker, and an illustrator.

In addition, Kate is also the author of  Mama’s Belly, illustrated by Abigail Halpin  (Abrams, 2018) , and A Songbird Dreams of Singing: Poems About Sleeping Animals.

She lives in Brooklyn with her husband and two sons. Kate is represented by Victoria Wells Arms at Wells Arms Literary/HSG Agency.