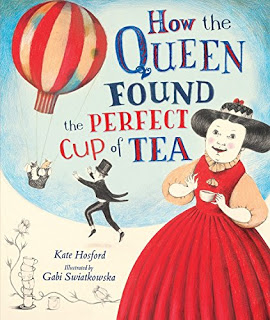 Today we welcome author Kate Hosford to chat about How the Queen Found the Perfect Cup of Tea,
illustrated by Gabi Swiatkowska (Carolrhoda Books, 2017). From the promotional copy:

Each day when the Queen wakes up, three maids dress her, two more style her hair, and her butler James makes her tea. But when she grows dissatisfied with her brew, the Queen and James set out in search of the perfect cup.


With each stop on their hot-air balloon journey, the Queen encounters new friends who expand her horizons—in the kitchen and beyond.


Can you tell me about your new release? Was it inspired by something in particular?

I started working on it in 2009 when getting my MFA in Writing for Children and Young Adults at Vermont College of Fine Arts. I worked on picture books there with the extraordinary author and teacher Uma Krishnaswami.

The book was probably partly inspired by my aversion to cooking. (Both the Queen and I approach the kitchen with a certain amount of trepidation.) Aside from that, I just knew that I wanted to write about a pampered and lonely queen who yells at her butler when her tea tastes horrible, and then makes him take her around the world in a hot air balloon, searching for the perfect cup of tea.

I knew she would meet children along the way, and that the tea would start to taste better once she became more self-sufficient, and made some friends. However, in the early drafts, the children were still somewhat deferential, treating the Queen like royalty and giving her special gifts.

Uma really encouraged me to turn colonialism on its ear. Once I did, the story not only made more sense, but also became funnier, because the unimpressed children force the Queen to try all sorts of things that she normally wouldn’t do, like snuggle a kitty, play soccer, dance at a birthday party, and of course, make tea. 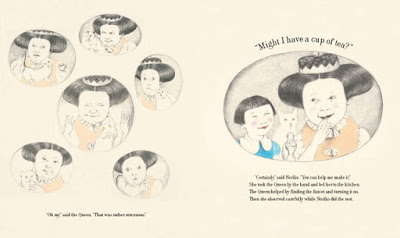 The Queen is like a toddler in some ways, experiencing a huge range of emotions in a small amount of time. Each time she visits a new land and is forced to try new things, she goes through a whole cycle of emotions: condescending, perplexed, startled, happy, proud, etc.

Gabi Swiatkowska did a wonderful job expressing all of these emotions in her incredible illustrations. She even used reference from baby faces for some of the Queen’s expressions!

Since Gabi also illustrated Infinity and Me, did the two of you end up communicating about How the Queen Found the Perfect Cup of Tea more?

Gabi is an old friend, so we communicated a lot on both of the books. Infinity and Me (Carolrhoda, 2012) was done in a very different style with a number of different non-oil based paints.

For How the Queen Found the Perfect Cup of Tea, Gabi told me that she was going to use colored pencil and expressive line, and then occasional full page spreads just in colored pencil, which I thought was great combination for this humorous book. 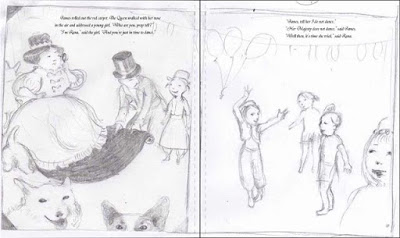 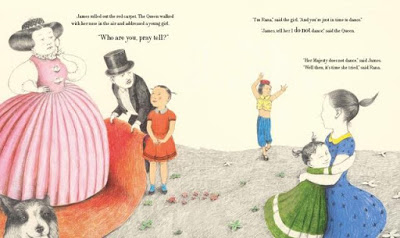 I’ve noticed sometimes beginning writers think picture books should have a moral or teach a lesson. How the Queen Found the Perfect Cup of Tea illustrates self-sufficiency, but this is very subtle, almost a subtext. Can you talk about this difference and how a theme emerges in a picture book?
Thank you! I hope the message about self-sufficiency is subtle and integrated into the story.

I think themes can naturally emerge from picture books when the intention behind the writing is to explore the growth of a character rather than to teach a lesson.

In this case, I tried very hard to focus on the Queen’s character. At the beginning she is lonely and impotent, even though she is a Queen.

I wanted her learning curve for making tea to be so slow that it would be funny. In Japan she can only turn on the faucet, and in India she is able to turn on the faucet and add water to the teapot. By the time she gets to Turkey, she can even boil water!

The Queen approaches each culinary task like an explorer who has discovered an intriguing but dangerous new land. I hope that after this slow build-up, her discovery of the perfect cup of tea feels earned. 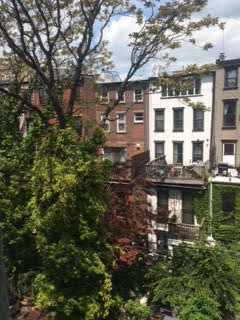 When and where do you write? Why does the time and space work for you?

I live in Brooklyn, and have a writing studio next door to my house.

When I look out the window,  I can see squirrels running up and down the trees in the back yard, and can sometimes hear a trumpet player practicing, and pigeons chatting.

I try to start writing at about 11:00 am after exercising and doing other household duties, and get home by 4:00 for my boys. Honestly, that means the writing day is too short, so sometimes I try to work more from home while they are doing homework.

After dinner, I’m too tired to do anything productive.

What are you working on next?

I’m currently working on a poetry collection about the brilliant and mysterious octopus. I would also like to do a non-fiction picture book on either a classical musician, or perhaps an ornithologist.

I have a picture book coming out with Abrams next spring called Mama’s Belly, which will be beautifully illustrated by Abigail Halpin. I’m really excited about it, and can’t wait for it to come out!

Publishers Weekly described Gabi Swiatkowska’s illustrations as “delicious, old-world pastels render
each character as a distinct individual…the details give Hosford’s round-the-world tale offbeat charm, and readers will smile as they watch the Queen shed her haughtiness and embrace her own capabilities.”

A curriculum guide and tea recipes from each of the countries the Queen visits are available online.

Kate Hosford graduated from Amherst College in 1988 with a degree in English and Philosophy. Before becoming an author, she worked as an elementary school teacher, a social worker, and an illustrator. In 2011 she received her MFA in Writing for children and Young Adults from Vermont College of Fine Arts.

4 thoughts on “Author Interview: Kate Hosford on Theme, Re-imagined Colonialism & How the Queen Found the Perfect Cup of Tea”