I had the pleasure of interviewing Christine Day (Upper Skagit) for Cynsations. Her debut middle grade novel, I Can Make This Promise (HarperCollins 2019), was inspired by her own family history and tells the story of twelve-year-old old Edie who discovers her family secrets and finds her own Native American identity.

What were the challenges (literary, research, psychological, logistical) in bringing I Can Make This Promise to life?

Even though this book is marketed as #ownvoices, the Native representation was a challenge. I think the stakes felt higher for me, because Native narratives are given so little space in children’s-YA literature.

It was important to convey the tension in intergenerational stories, the importance of family and community connections in young Native lives, and the specific histories and geographies outlined in this story. These are real places and real people.

This book is fictional, but it speaks to various truths in our society. I wanted that to be very clear, to both Native and non-Native readers.

Also, before I found my Dream Team, it was hard to break through to agents and editors. At one point in my journey, someone asked if I would be willing to rewrite the entire story from Edie’s mother’s perspective, set in the 1970s or 1980s, because they believed that would improve the “stakes” of the book. They thought that Edie was too far removed from the “action” that was happening in Native lives and communities, historically. And while this is valid advice, I knew right away we weren’t a good fit.

I declined the opportunity to follow through with that revise and resubmit. Because I’m not writing historical fiction here. And I’m not interested in any version of I Can Make This Promise that doesn’t include Edie, because to me, she is the heart of the novel. This story uniquely belongs to her. I wouldn’t have it any other way.

Plus, in my opinion, writing a story set in the past sometimes implies that certain issues are no longer a problem. And I think the issues Native communities faced pre-Indian Child Welfare Act are still relevant and ongoing today. Because it was never about impacting a single child, a single family, or even a single generation. We are talking about systemic cultural genocide here. We are talking about policies designed to fundamentally change an entire people, an entire Nation, an entire future.

Be gentle with yourself. It takes serious mental and emotional athleticism to bring a book into the world.

So please, take care of yourself through the highs and lows. You need to let yourself breathe. You need to learn when to walk away. And you need to remember that you and your literary art are two separate entities.

I no longer swear on social media.

To be clear: I’m not in the “Keep YA Clean” camp, by any stretch of the imagination. I have absolutely nothing against children’s-YA writers swearing. And I mean, obviously, I’m writing books that address the ripple effects of intergenerational trauma and cultural genocide, which is about as far away from “clean” content as you can get. So maybe it seems a little silly that swearing is where I personally draw the line.

But for me, it feels important right now, because I think there are enough adults in this world who treat their social media profiles as private journals, or personal outlets for “locker-room talk.” And it must make issues like cyberbullying and casual racism so much harder to tackle in our schools. Which is why I generally choose to refrain.

Each time I post something online, I pause and ask myself if I would say this same thing in front of an elementary or middle school assembly. Because that’s who my real audience is. That’s who I’m here for. So that’s how I try to conduct myself, especially since my public profiles are one way for educators to get a sense of who I am, and what to expect from me if they invite me into their school environments.

Also, in terms of marketing and promotion, I’ve learned to thrive outside of my comfort zone. I think most people in my life view me as a generally modest and quiet person. I can also be very private, about certain things.

But as an author, it’s important to be open with yourself and your work. If you want people to be aware of your signings and events, you need to post about them with some regularity. You need to be willing to introduce yourself to new people, and to keep performing and sharing the same stories, over and over.

I can see why some writers burn out, or why they might prefer a more anonymous approach to developing a public persona. But it’s absolutely been worth it for me because I love connecting with kids and readers. Writing can be such an isolating journey, and it feels good to step out in front of people, from time to time. 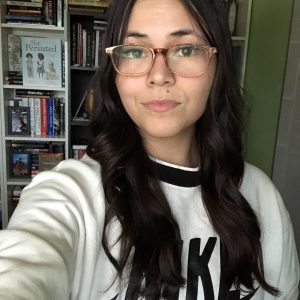 Christine Day (Upper Skagit) grew up in Seattle, nestled between the sea, the mountains, and the pages of her favorite books. She holds a master’s degree from the University of Washington, where she created a thesis on Coast Salish weaving traditions.

I Can Make This Promise is her first novel. Christine lives in the Pacific Northwest with her husband.