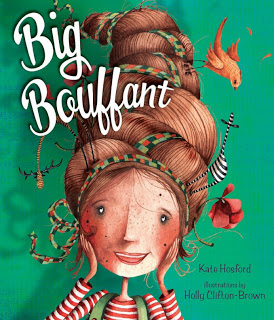 Kate Hosford is the first-time author of Big Bouffant, illustrated by Holly Clifton-Brown (Carolrhoda, 2011). From the promotional copy:

Annabelle doesn’t want the same boring hairstyle that all the other girls have.

When she spies a picture of her grandma, she has the perfect idea: a big bouffant!

But how can she make her style stand up? And will her classmates really be impressed with her daring ’do?

What were you like as a young reader, and how did that influence the book that you are debuting this year?

I come from a long line of readers. I think my grandmother had to make a rule for my mother that she was only allowed to read at the dinner table one night per week, and I was like that as well. I even remember reading through a school fire drill when I was in elementary school.

I was always attracted to independent female characters like Pippi Longstocking, Madeline, Eloise, and Anne of Green Gables. All of these girls went their own way without worrying too much about what other people thought. I probably based my main character, Annabelle, on this type of girl.

As I grew older, I sought out stories about children in New York City, like Harriet the Spy by Louise Fitzhugh (Harper & Row, 1964) and From the Mixed up Files of Mrs. Basil E. Frankweiler by E.L. Konigsburg (Atheneum, 1967). The idea of a child making her way through the city alone seemed so glamorous to me. I still feel that way when I reread those books.

So I guess it somehow makes sense that I ended up living in New York City, writing about an independent girl who wants a little more glamor in her classroom. 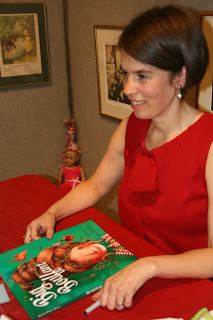 [Kate at launch party for Big Bouffant at Books of Wonder in New York City; photo by Charlie Hosford.]

About ten years ago, I was working as an illustrator. I started writing picture books as a way to get more illustration work, but gradually discovered that I preferred the writing to the illustrating. This realization was very liberating, and I decided to focus all of my energy on becoming a writer.

In January, I received my M.F.A. in Writing for Children and Young Adults from Vermont College of Fine Arts. This was a total immersion experience, which allowed me to work on the craft of writing for two solid years. It also provided me with an amazing network of writers.

Now I am more confident about revision, and if I get stuck, I have a lot of people who can help me out.

Writing can be lonely, and building a writer’s community is one of the most important things that a writer can do, second only to parking oneself in a chair and writing.

I think my main strength is coming up with whimsical ideas. I already have more ideas for Annabelle, the star of Big Bouffant, so stay tuned.

Often stories will come to me in the form of a title, and I’ll write it down and then come up with the story later. In the case of Big Bouffant, I started with “bouffant,” which is already a fun word to say, and then my younger son started saying “big bouffant.” The phrase “all I really want is a big bouffant” came to me soon after, and I would walk around mumbling it to myself.

That’s one of the great things about New York, you can walk down the street talking to yourself, and no one will even notice!

However, I then spent the next four years writing versions of the story in prose. At that time, I somehow felt I had to avoid rhyme, when actually rhyme was exactly what I needed to bring the story to life. If I had listened to that initial voice in my head, I would have realized that the correct form for the story was already there.

During graduate school, I discovered that I loved writing poetry, especially poems with rhymed couplets. I really enjoyed creating poetry collections, where I could explore a theme thoroughly through a series of poems. 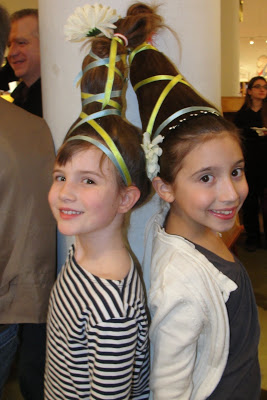 [Photo from the launch party for Big Bouffant at Books of Wonder in New York City; photo by Greta Mansour.]

One challenge I have is making sure that my picture books stories lend themselves to visual images. This may sound obvious, however it’s easy to be swept away by a story that is interesting but not so visual.

I once wrote an entire story about a little girl talking to a seed that wouldn’t grow…. It would take a very special illustrator to bring that one to life!

Stories that have too much dialogue are often problematic because the characters are just standing around talking to one another. I try to storyboard my stories to make sure that an illustrator would have enough visual images for an entire book.

Another challenge that I face is walking that fine line between providing enough textual clues to inspire an illustrator, but also enough breathing room so that she can be a creative collaborator.

It’s easy to overwrite the text. Or sometimes the tendency is to underwrite, but then provide lots of art notes just in case the illustrator doesn’t “get” it. Finding that middle ground can be tricky, but it’s essential.

An evocative text allows the illustrations to sing, and when the interplay between words and images is right, a picture book really becomes more than the sum of its parts. That is one of the reasons why I find this genre so exciting.

More photos from the launch party for Big Bouffant at Books of Wonder in New York City; photos by Greta Mansour. 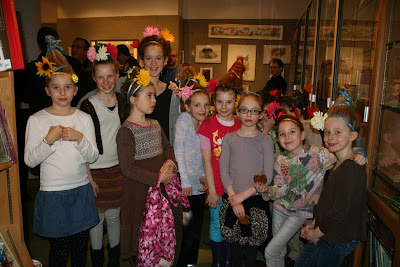 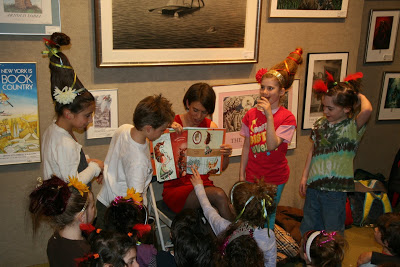