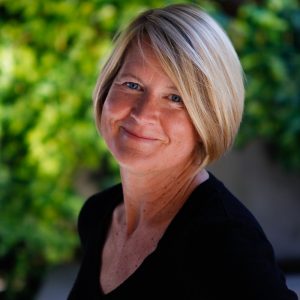 Elizabeth Rusch is an accomplished author who joins us today to discuss her newest picture book and share insight on juggling multiple projects.

Congratulations on Glacier on the Move, illustrated by Alice Brereton (West Margin Press, 2019)! It joins a long list of your other titles that includes both fiction and nonfiction, picture books, and even a middle grade graphic novel.

When was your first book published and how many have come out since then?

Thanks! One of the things I love best about being a writer is that I can write about anything that interests me, from mud, crayons and jokes to engineering, invention–and glaciers.

My first book, Generation Fix: Young Ideas for a Better World (Beyond Words Publishing) was published in 2002 and is still in print, which is cool. It tells the true stories of 15 young people who saw a problem in their community and did something about it. I still think young people hold the keys to solving the really difficult problems facing our world.

Since Gen Fix, I’ve published 15 trade books and a few for the school library market.

What was your initial inspiration for writing Glacier on the Move?

These huge masses of ice, which gleam white and glow blue, seem at first glance to be permanent features of the landscape. But every year, I can see glaciers growing and retreating. The glaciers themselves change shape with soft cornflower snow piling on top and cold, hard ice melting at the bottom. Wildflower meadows and alpine lakes fed by glacier waters are the most beautiful in the world.

But the inspiration for Glacier on the Move came during a day-long glacier boat tour on the Prince William Sound in Alaska. As my daughter and I oogled all the different kinds of glaciers, watched glaciers calve and learned about glacier processes from the park ranger on board, I started to hear a voice. It was the voice of a young glacier making funny comments about all the strange things that happen to her over time as she slowly moves and changes. I jotted lots of notes in a small notebook, which became the voice of the book. Flo was born! 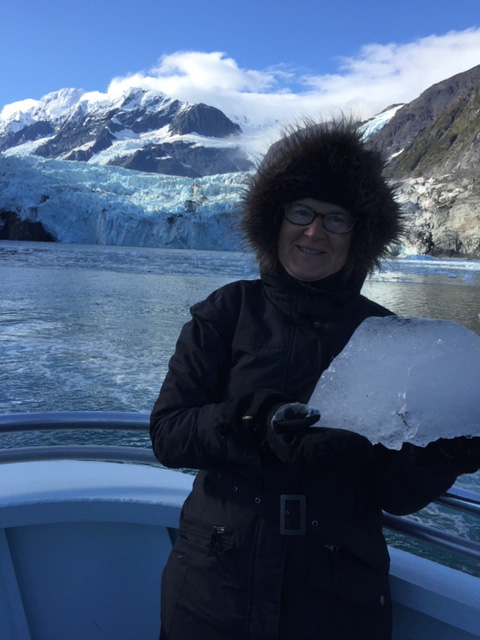 You used personification, giving the glacier a name and a voice. Is this a technique you’ve used in your other books?

I contributed a short graphic novel piece, Diary of a Volcano, to a collection called Oregon Reads Aloud (Graphic Arts Books, 2016) about a young volcano named Squirt who erupts, goes to sleep and awakes hundreds of years later to blow up again. He was funny and informative, and I think I had been subconsciously hoping another “character” from nature would speak to me.

While writing Glacier on the Move, I enjoyed the technique so much that I also created an ice worm who offers commentary on everything that happens to Flo on her journey to the sea. It’s the science behind the story she’s telling.

I’m guessing you work on multiple projects simultaneously. Can you share with us how you divide your time and find balance in your life?

Oh yes, I juggle books, and I think they’re harder to juggle than balls!

At the moment, I have six books under contract that I keep in a file called “Works in Progress,” books on a surfing pug, a girl who cares for a tree, a chemist who saved our planet, a hunt for the northern lights, the science behind the Cascadia earthquakes, and the state of our democracy.

I’m actively developing about a half dozen new projects. And this might seem crazy, but I have 36 more ideas for books I want to write.

I’m a big fan of To Do lists, so I generally have one for upcoming season (fall 2019 etc.) and from that I build weekly To Do lists. I can develop, research, do promotional stuff, and review first layouts, copyedits and proofs for different books on the same day but when I am writing or revising I usually have to focus on one book for the full day or multiple days in a row. So I schedule those as writing days.

I aim for balance every day, running or walking the dog or doing a yoga or dance class usually in the morning; then working for six-to-eight hours; then enjoying meals with my family; reading, hanging out with friends, or going to a play or something in the evenings.

I take full-on vacations whenever possible, leaving email and my computer behind (perhaps to the chagrin of my editors!) When I work, I work hard. When I play, I really play. At least in theory. ‘Cause when I’m on vacation I tend to get new ideas for books, and that’s the last thing I need…

I agree with all the typical advice people give: Read, read in your genre, read outside your genre, read about writing, write regularly, persevere, push yourself to be creative and don’t always go with your first or even second idea.

But for nonfiction writing for kids in particular, I suggest that for whatever topic you want to write about, read every kids book written on that topic and think deeply and creatively about how your book is going to be different and better.

Is there a part of this story that has not been told? A fresh way to tell it? Is there a fun or dramatic concept that will bring your story to the next level? A playful or suspenseful way to handle the material? With nonfiction books, I think the success of a project often depends on the conception stage, before you have written your first word. 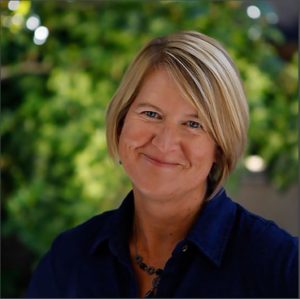 Her wide-ranging passions include astronomy, volcanology, art, music, history, nature, waves, jokes, crayons, and mud — anything that catches her fancy.

She has written more than 100 magazine articles and more than a dozen acclaimed children’s books, including picture books, middle grade, fiction, nonfiction and even a graphic novel. She recently received her first credit as a story editor on a documentary film and is considering writing a screenplay.

Liz loves where she lives in Portland, Oregon, with her husband, two terrific kids, and one very funny, quirky dog named Reba.