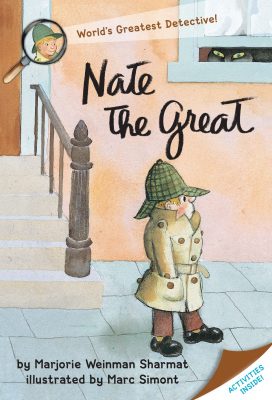 Marjorie Weinman Sharmat, the author of more than 130 books for children and young adults, died on March 12 in Munster, Indiana. She was 90 years old.

She is best known for creating the young sleuth, Nate the Great (Putnam, 1972). According to a Washington Post article by Emily Langer, the books about Nate, who was named after Marjorie’s father, “sold 15 million copies, according to the publishing company Penguin Random House. Many of those volumes featured pictures by the Caldecott Medal-winning illustrator Marc Simont.”

The 29th Nate the Great book, Nate the Great and the Wandering Word (Delacorte, 2018) was co-authored by Marjorie’s son, Andrew Sharmat and illustrated by Jody Wheeler.

Family collaborations were frequent for the Sharmats. Marjorie’s husband, Mitchell Sharmat, collaborated on several Nate titles, as well as the spin-off series, Olivia Sharp, Nate’s cousin. Another of their sons, Craig, co-wrote three Nate books, and Andrew also collaborated with his mother on the Kids on the  Bus series in the 1990s. One of Marjorie’s first books, Goodnight, Andrew; Goodnight, Craig (Harper & Row, 1969), was inspired by her sons.

Marjorie also incorporated her family members into Nate’s story, as she explained to Heidi Henneman in an 2002 interview with BookPage which celebrated the character’s 30 anniversary.  In addition to naming the title character after her father, Nathan Weinman, “her sister Rosalind became the feline-loving Rosamond. Her uncle Harry became the mischievous young Harry. And her mother Anne played a part as Nate’s friend Annie.” 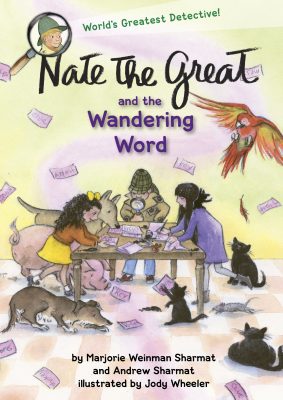 In 1972, easy-reader books were just starting to become popular and the emerging market aligned with Marjorie’s writing goals.

“I wanted to make this book, inspired by my father, easy to read.” Putnam accepted her manuscript, and “the acceptance letter arrived on her father’s birthday. And shortly thereafter, the book was reviewed by Gene Shalit on the Today show.”

That night when Mr. Weinman went to the synagogue, people called him Nate the Great.  “I told him before he died that I would continue writing the Nate stories,” Marjorie told BookPage. “I knew that I would—whether or not they were published—because I felt that Nate was such a strong character, and he was based on such a wonderful man.”

Andrew told the New York Times that writing determination was his mother’s trademark. “It was like she was launched into the stratosphere,” he said. “She loved it. She didn’t cook our dinner — she wrote books.”