When I tell strangers I’m a children’s book author, the first thing they often want to know is whether I am published.

The second thing they want to know is who is my illustrator? Where did I find someone to illustrate my books? How does that whole thing work?

The average person (i.e. someone who is not in children’s publishing) doesn’t realize that authors rarely have any say in who illustrates our books.

Most of us (with the exception of those who are both authors and illustrators) don’t know our illustrators or have any contact with them whatsoever. It’s up to the publisher to find and work with the illustrator.

Again, people are often surprised to hear this. “You mean you don’t tell the illustrator what to draw?” 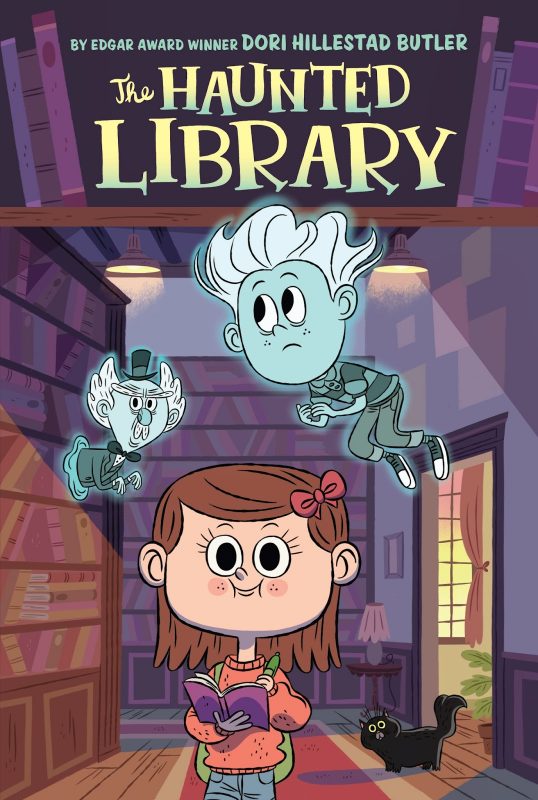 Well…I do usually have a few notes to the illustrator for my Haunted Library (Grosset & Dunlap) manuscripts, but that’s because this is a chapter book mystery series and there are clues to solving the mystery in the illustrations.

Clues that never appear in the text. So I have tell my editor, art director, and illustrator what those clues are.

And that’s actually okay with me. I think it’s in an author’s best interest to leave as much to the illustrator as possible.

They almost always come up with things I wouldn’t have thought of on my own, and it’s always a nice surprise to see the art in my books for the first time.

I am especially happy with the work Aurore Damant has done on my Haunted Library series. It makes me very curious about her.

Who is the person who draws my ghost world even better than I see it in my own head?

So I decided to interview her for Cynsations and try and get to know her a little bit.

Dori: Hi, Aurore! Thanks for letting me interview you. Let’s start with where do you live?

Aurore: I live in Paris, France, not far from Montmartre.

Dori: Wow! Okay, truth be told I did actually know that already. But it’s about the only thing I did know about you before this interview. And the fact that you live in Paris just adds to the mystique.


So, are you married? Do you have kids?

Aurore: Julien and I are together for 10 years and married since 2012. We don’t have kids!

Dori: How about pets? For our bios, you drew me with a dog on my shirt and you drew yourself with a cat on your shirt. I assume that wasn’t coincidental?

Aurore: When our editor asked me to do your portrait, I found several pictures of you with a big black dog, and I assumed you were a dog person!

I’m totally a cat person. My cat’s named Lois, she’s 3, and she’s the most mischievous cat ever.

Dori: Good guess! I am totally a dog person! But I like cats, too. I’ve been owned by three cats over the years. What do you like to do in your spare time?

Aurore: Hang out with my friends, play with my cat, go to the movies, have drinks, walk around Paris, shop, watch TV series, travel if I can… Pretty basic stuff.

But actually, I draw all the time… if I’m working on an interesting project, I don’t mind drawing at night or during the weekend. I’m such a nerd.

Dori: Ha! Me too! What is your illustration background?

Aurore: I started in animation, I studied at Gobelins which is a famous art school that specializes in animation, based in Paris. I developed several TV series.

Five or six years ago I had some opportunities to do some freelance illustration work, and I enjoyed it very much. People trust me and give me carte blanche most of the time, which is awesome.

Now I do as much illustration as animation, and I love them both!

Dori: That’s very cool! And that explains the animated look (which I love, by the way) to the books. Can you say a little bit about your illustration process? 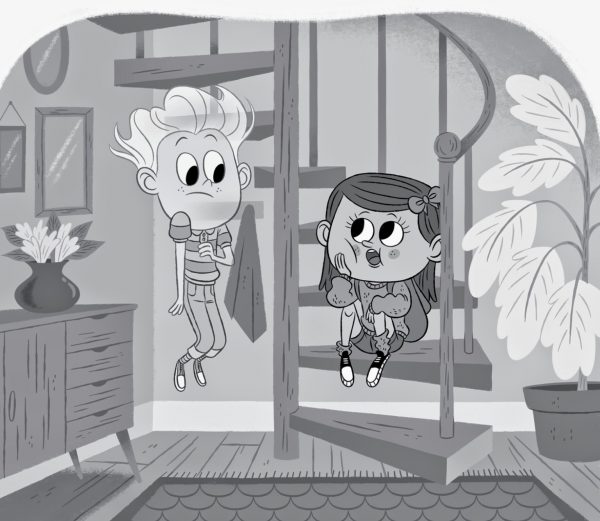 Aurore: Everything starts in my head. Generally, I have a clear vision of the character or the composition I want to do. I don’t need to make a lot of tries before I find the right design, it comes on the spot. But I also use a lot of references, like old cartoons and old children books (Little Golden Books are the best).

When I’m happy with the rough design, I have to choose the style of the illustration. Black outline, color outline, no outline at all… same with the backgrounds. I have to find a good balance.

I work digitally on a Cintiq, which is a large screen plugged in to my computer, and I can draw directly on it, which is a real time saver and gives me a lot of freedom to explore various looks for my illustrations.

Dori: I didn’t give you a lot of physical description for most of the characters in the Haunted Library. How did you decide what they should look like?

Aurore: For Claire, I tried to fit her personality in the story. She had to look thorough, yet sweet. One of my references was “Coraline” from the stop motion film by Henry Selick.

For Kaz and the other ghosts, it was easier in a way since I never had the opportunity to draw any ghost before. So I could take a fresh start! 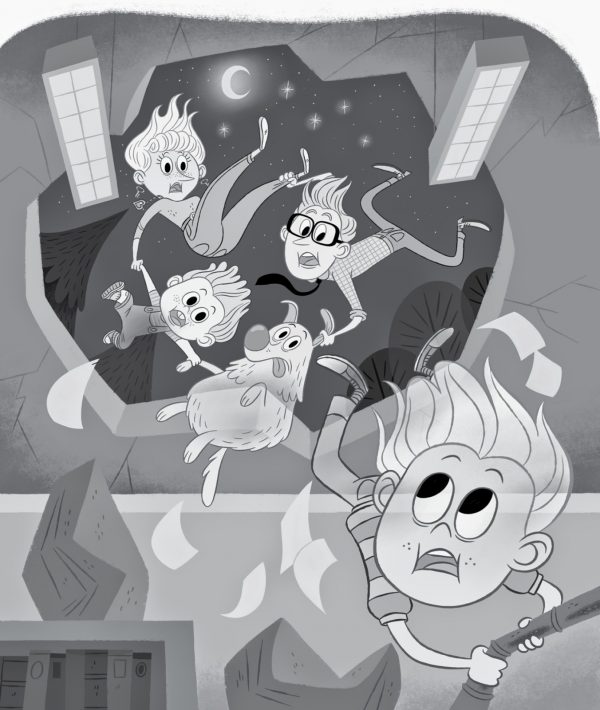 The only thing I hesitate is to give them a human appearance or make them with simple shapes like Casper. But I thought it would be easier to relate to them if they look humans. Then I had enough info in the story about their personalities to find a design that matches.

Dori: You absolutely did the right thing giving the ghosts a human form. That was what I had in mind. How long does it take you to illustrate a Haunted Library book?

So it takes you about the same amount of time to do the art as it takes me to plan and write the first draft of one of these books.

Here’s a random question. I’m liking you more and more with every question I ask, so I’d like to know if you and I could ever meet in person and hang out for an afternoon, what would we do together?

Aurore: We would go in a cozy cafe to enjoy a big piece of pie and homemade hot chocolate, and talk about our jobs and our life in general. Then we would go check out some old houses with great history, hopefully one of them would be haunted… 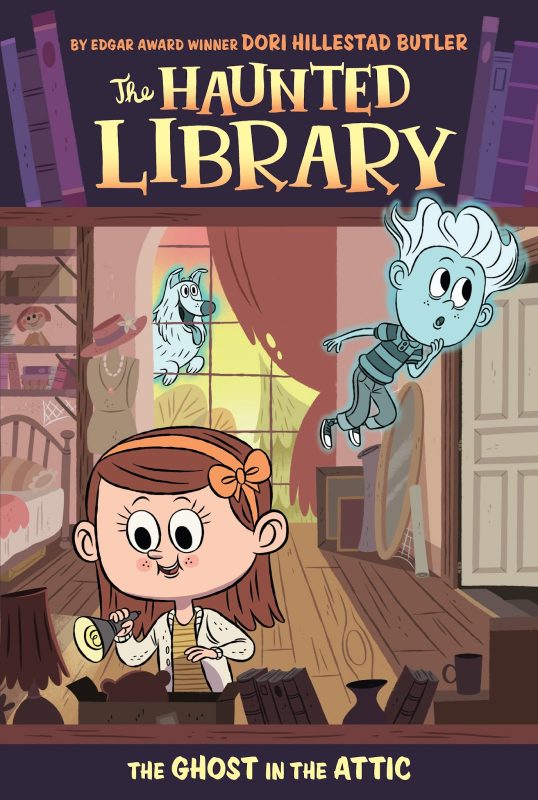 Dori: Wow! That is exactly what I would like to do with you! Maybe one day we can do that? Or should I say two days…once in Paris and once in Seattle!


One last question: If the series continues, what would you like to see happen? What kind of ghostly mystery should Kaz and Claire solve? Is there anything in particular you’d like to illustrate?

Aurore: I never really thought about that!

But I guess I would love to see them go in some spooky or weird places like an old fun fair, an abandoned house or a natural history museum. Or maybe have them solving a case during Halloween or Christmas, that would be fun!


Thanks for letting me interview you. It’s nice to get to know you.