N. Griffin is the first-time author of The Whole Stupid Way We Are (Atheneum, 2013). From the promotional copy:

So Dinah’s going to figure out how to help. That’s what Dinah does—she helps. But she’s too busy trying to help to notice that sometimes, she’s doing more harm than good. Seeing the trees instead of the forest? That’s Dinah.


But the wedge between what drives Dinah and what concerns Skint is wide enough for a big old slab of ice. Because Skint’s own father is in trouble. Because Skint’s mother refuses to ask for help even though she’s at her breaking point. And because Dinah might just decide to…help. She thinks she’s cracking through a sheet of ice, but what’s actually there is an entire iceberg.

KA: First of all congratulations on being recognized as a “Flying Start” by Publishers Weekly! That’s a sweet recognition for you and your first book, The Whole Stupid Way We Are. In addition, the story of Dinah and Skint is getting quite a bit of critical acclaim.

NG: Thank you so much, Kathi! I was really grateful for this—it was so surprising and lovely to see that other people liked Dinah and Skint, too.

KA: Would you first of all, tell us where Dinah and Skint came from? Who are they and what would you like us to know most about both of them?

NG: What a neat question! Both Dinah and Skint came from all over the place even as both of them also came from parts of me. Dinah is a kind of willfully childlike teenager, which I know can be either super irritating or super appealing to people without many reactions in between. I’ve known a lot of teens (heck, even a lot of adults) like this.

I tend to love that kind of person, because in so many instances, there is so much awareness behind that retreat into childhood—a sense of keenly experienced or understood pain. And I think that is exactly true of Dinah. She knows just how hard life can be, for herself but almost more especially for other people, and she’s having none of it, on everyone’s behalf. 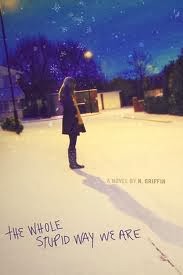 Skint is a bleaker, sadder kid. Retreat to childhood isn’t an option, because in many ways, he’s the most adult person in his own life and has to be. I’ve known tons of kids like this and was a kid like this, too, actually—even though I have a good dose of childlikeness in me as well. Likely because of the adultness, come to think of it.

But another big part of the creation of Skint was my belief that we sell our teens short. We are so quick to paint them as selfish and dippy that we disregard the truth that many kids and teens do feel the weight of the world and human suffering very keenly. The problem is our culture neither expects teens’ care nor offers them many clear paths to take action on that care, when action is, I think, the only antidote to the anger and powerlessness that we feel in the face of injustice.

So Skint is sort of an amalgam of these aspects of lots of kids I’ve known (and also parts of teen-me, but he is smarter and funnier than I ever was) as well as being possessed of a fully invented personality of his own.

KA: The weather in this book stands almost as a metaphor for the way that the characters and the readers too have to chip through the ice to get to a warm place. The freezing cold makes an appearance on almost every page, and in fact, while I read it, I felt shivery. And yet, Skint refuses to wear a coat. I kept wanting to throw a blanket over him, so I understand Dinah’s urge to protect him. What was going on there? Why the exposure to the elements?

NG: I think that sometimes, when something is unbearable, we do things to obliterate everything as a way of shutting out the unbearable as well as the feelings that come along with that.

In The Whole Stupid Way We Are, Skint is terrified, rage-filled and full of despair because of his home situation—a situation that is so overwhelming and so large a secret that is it more than anyone could bear alone. And Skint can’t. So, for me, his non-coat-wearing creates a physical discomfort so great it blasts away all those feelings and replaces them with the pure, physical misery of freezing.

I think there’s also a large dose of self-punishment in there, too. Other people might use drugs, not eat, cut, listen to loud music or play video games to do the same thing, but Skint freezes.

It kills me, too.

KA: The local church plays a large role here as well. And in fact, Dinah’s father is the Choir Director. Nevertheless, you skillfully kept religion out of the story for the most part. Still, the church serves as the “village” for this story. Can you talk about that?

NG: I love churches, temples, any place of worship (except crazy persecuting ones, of course). I love belief and I love the hope of people coming together to bring out the best of what we can be on this earth.

At the same time, I think that it can be impossibly hard to reconcile the idea of love with the truth of suffering. And this is, I think, one of the central ideas of the book. So it made sense to me that a church would be front and center and the backdrop of everything, and that different characters would respond in vastly different ways to awfulness of that contradiction.

Also I am a fool for a potluck.

KA: One of the most riveting scenes is the one with the dancing donkey. Where did that come from?

NG: Oh, I love Walter the donkey! I still think about him all the time. He came to me in a flash—I always knew just the type of sad/not sad activities Dinah and Skint would love—what I wound up calling “Fantastic or Excruciating?” adventures, or FoE’s, in the book. These are performances, usually, that are so on the border between phenomenal and cringe-worthy that’s it’s tough to sit through them because you feel the passion and need of the performers so keenly and you want things to go well for them.

So one morning I was thinking about this when Walter stepped politely into my mind and I got all weepy because I loved him so much. Which is kind of obnoxious, when you think about it.

I moved my own self! Come on, Griffin.

KA: Each of your characters is so carefully drawn, so alive. One of my favorites is Dinah’s baby brother, Beagie. Through him, you gave us the wonderful phrase, “boss of light.” In fact, the story is shot through with the struggle between light and dark. Can you talk about that? And why Beagie? Why is he the fulcrum for the opposing sides?

Good old Beagie was in the book from the start and I didn’t really think much about why until a lot later. He’s thirteen months old, which is an age I love and am fascinated by—a time when a lot of babies are furious because they want so badly to talk but can’t yet. Their frustration at their powerlessness makes them roar around, acting like the boss of things, which reaction makes perfect sense to me.

And so, in retrospect, I can see how my subconscious plucked a Beagie forth as another way to think about the tension between wanting power and the hideousness of not having it. But who’s to say?

Beagie is Beagie and he wants his sippy cup right now, please.

KA: This book is a testament to the very real ramifications of mental illness and the way it impacts families, friends, villages. You shone a light on the struggle that especially the caregivers have to face, including shame, which seems to underlie much of what Skint and his mother are coping with. But it’s Dinah’s reaction that is so telling. Would you talk about that?

NG: Sure. Dinah is a girl who has experienced death through the loss of an elderly relative, and that grief is keen and unyielding for her. So, I think in large part, she can’t bear for Skint to feel any pain even remotely akin to that, and she makes it her impossible business to save him from it.

But I also think, in her secret heart, she doesn’t want her own pain to be triggered in any way, and that makes her avoid, at least in part, the magnitude of Skint’s true pain as well.

I think this is such a familiar predicament to a lot of people, especially teenagers. I know I was very much this way as a younger girl. Poor Dinah. It’s an awful setup to want to save someone so badly.

KA: What do you hope your young readers will find here? What do you want to give them in return for reading this story?

NG: I hope that they experience the book as a true reflection of what it can be like to struggle with the hard things I’ve been talking about in these responses, whether they’ve had those kinds of struggles or not.

But I also hope they find a lot of light and humor in the book, and that their reading gives them the option of thinking about Dinah and Skint as friends they’d want to hang out with.

I did try to put in a lot of funny bits, y’all.

KA: On a more personal note, can you tell us a wee bit about your writing life?

NG: Oh, my writing life is a vile thing, people. I have a lot of anxiety around writing and every word is a battle. I have no tips for this. We terrified types must just bash through and salute our brethren and sistren who struggle along like this, too.

But here is an underdeveloped picture of the comfy chaise in which I do a lot of the struggling. 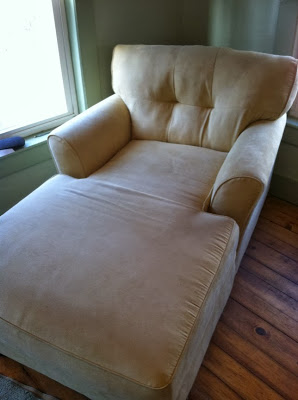 KA: And finally, what is next? And when will we see it?

NG: Next up is an untrammeledly fun book—a cheerful middle grade mystery with a pair of best friend detectives. It’s untitled as yet because I am so vastly bad at thinking of titles. But the detective children are named Smashie and Dontel and I love them. That book is scheduled for fall 2014 from Candlewick.

Thank you so much for having me, Cyn and Kathi! You all are superheroine tangerine pies.

Her first novel, The Underneath,
was a National Book Award Finalist and a Newbery Honor Book. It also
received the Pen USA Award, and was a finalist for the Heart of Hawick
Children’s Book Award. Her most recent novel, The True Blue Scouts of Sugar Man Swamp, was also a National Book Award Finalist. Kathi serves as a faculty member at Vermont College of Fine Arts in their MFA in Writing for Children and Young Adults program.

One thought on “Guest Interview: Kathi Appelt & N. Griffin on The Whole Stupid Way We Are”