Award-winning Author Fredrick McKissack Dies at 73 from The Brown Bookshelf. Peek: “Beloved children’s author Fredrick L. McKissack died on Sunday, April 28, at the age of 73. With his wife and longtime writing partner Patricia, McKissack was the author of more than 100 books for children…”

“We received a call on Martin Luther King Jr.’s birthday holiday from a member of the Coretta Scott King Award Committee and she informed us that our book was an honor book.

“We were sooooooooo happy, but we were also moved by the idea that it had happened on Dr. King’s Day. We said a prayer of thanks. Then we shouted for joy. We called our family and good friends to share the good news.

“Then we went out for a breakfast celebration at I-HOP and continued to celebrate our good fortune combined with the King holiday of peace, love, forgiveness, and joy — with friends and family. It was a good day.” 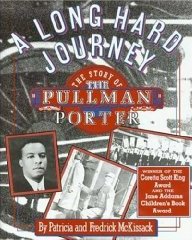 Fredrick L. McKissack, 1939-2013 by Shannon Maughan from Publishers Weekly. Peek: “As a writing team they adopted a strong focus on African-American themes for young readers, largely inspired by a shortage of such books in the marketplace. Their early 1990s biography series, Great African Americans (Enslow), included volumes on Frederick Douglass, Marian Anderson, Paul Robeson, and many others…. Donations in memory of McKissack can be made to the National Kidney Foundation and/or the United Negro College Fund.”

We Will Miss Our Dear Friend Fredrick McKissack from The National Children’s Book and Literacy Alliance. Peek: “Fred McKissack was a man of honor and duty; a man of compassion and kindness; a man who brought light, joy, love, and wisdom into the lives of his beautiful family and many friends. We are so grateful, and honored, to have had Fred in our lives.”

In this video Fredrick quotes Albert Einstein on the importance of reading to children. It also includes a reading by Patricia of Goin’ Someplace Special, illustrated by Jerry Pinkney (Atheneum).