All dead. No one survived. All dead.


This morbid chant haunts seventeen-year-old Blue as she trudges through the countryside with just the clothes on her back, heading to her childhood home on the ocean.

Something absolutely awful has happened, she knows it, but she doesn’t know what. She can’t even remember her name, so she calls herself Blue.


This gripping survival story—peppered with flashbacks to bittersweet times with her boyfriend Jake—strips life down to its bare bones.

Blue learns, with the help of a seemingly magical stray dog and kind people along the road, that the important thing is to live.

Perhaps the biggest impetus for this book occurred twelve years ago when a friend of mine lost her house and everything in it in a sudden gas explosion. Luckily my friend was out at the time, but when she got back, her home was crumbled to rubble and ash.

The idea of losing everything so suddenly was something that has haunted me ever since. Then, like many writers, I raised the stakes by asking, “what if?” What if this happened to a teenager? What if her home and her family had “blown-up?” How would she possibly go on?

Such a tragedy would likely cause panic and short-term memory loss. This happens to Blue (the main character) as she flees, and for is compelled to walk 500 miles east with no money, food, cell phone, etc…to hide in the shadows and until she can no longer refuse help.

There were other things I wanted to explore–such as the surreal bond between a dog and human (I am a big fan of dogs), and people who live “off the grid” and don’t fit into the norms of society. I’d met someone who used to train hop and that lifestyle fascinated me.

I wanted to explore surviving tragedy when you think you cannot. In other words, I wanted to write about the journey of life, both figurative and literal. And the possibility of hope.

All these things were milling in my brain for years while I went about writing other books, teaching, and doing whatever it is I do.

Then finally, three years ago, I was really stuck and had no idea what I was going to write next. I’d published two novels and a bunch of picture books. 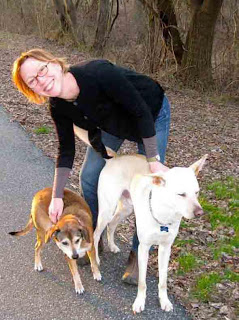 I wanted to challenge myself in a new way and to write in a voice that
is not at all like mine, from the point of view of a character that is
not at all like me. It seemed the right time to take a risk and finally
weave together all these things I’d been contemplating into a story. Why
not?

I knew where I wanted Blue in the beginning and where I wanted her in the end. The journey would be all that happened in between, her quest, both internal and external, to get where she needs to be.

I went to a cafe and began writing by hand in a notebook as if I were Blue and this was her private journal, as if my house had just blown up and I couldn’t remember a thing except that I had to get home. I kept writing day after day, one scene at a time, eventually filling three journals.

Then I transcribed and edited into the computer, organized scenes, wove in flashbacks, made storyboards, started over, wrote more, and revised like hell for about two years until I had a decent draft and out came Nothing But Blue.

The dog in the trailer is one of Lisa’s dogs, Rico.

From the promotional copy of  Me, Penelope:

More than anything, Lopi wants to find someone to really connect with, someone to love, and she wants to forget all about the accident that happened six years ago. She’s already figured out how to graduate a year early, but the rest isn’t so easy.

Lopi tries to navigate the murky waters of sex and love and growing up, but she can’t fool herself—Lopi has a secret that sets her apart: the accident was her fault, she is evil . . .

From the promotional copy of Country Girl, City Girl:

Phoebe Sharp lives on a small farm in Maine, where she reads fairy tales to her goats and snaps pictures with her Instamatic camera. Phoebe doesn’t have a single friend, never mind a boyfriend.

Then she meets Melita. With her caramel-colored skin, stylish clothes, and urban attitude, Melita seems as different from Phoebe as two teenage girls could be.

5 thoughts on “Guest Post & Giveaway: Lisa Jahn-Clough on The Writing Process & Nothing But Blue”