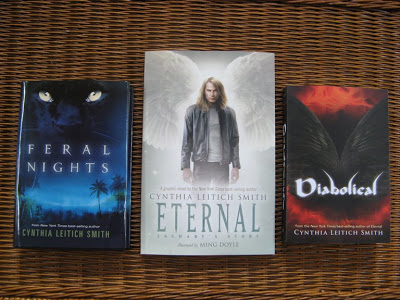 Hooray! My latest books, Feral Nights (Book 1 in the Feral series), Eternal: Zachary’s Story (a graphic novel illustrated by Ming Doyle) and the paperback edition of Diabolical (Book 4 in the Tantalize series), are now available from Candlewick Press. So we’ll be celebrating all this week at Cynsations with a related series of posts!

Here’s your chance to enter to win signed copies!

From the promotional copy of Feral Nights:


When all three seekers are snared in an underground kidnapping ring, they end up on a remote island inhabited by an unusual (even by shifter standards) species.

The island harbors a grim secret and were-predator and were-prey must join forces in a fight to escape alive.

Read a sample chapter of the prose novel Eternal from Candlewick Press.

From the promotional copy of Diabolical (paperback edition, previously released in hardcover and e-book format):


Plagued by demon dogs, hallucinatory wall decor, a sadistic instructor, and a legendary fire-breathing monster, will they somehow manage to escape? Or will the devil have his due?


Best-selling author Cynthia Leitich Smith unites heroes from the previous three novels in the Tantalize series — including Zachary’s girl, Miranda, and Kieren’s love, Quincie — along with a fascinating cast of all-new characters for a suspenseful, action-packed clash between the forces of heaven and hell.

Cynthia Leitich Smith & Feral Nights: an interview from Joy Preble. More
thoughts on the new novel and its main characters, balance (or lack
thereof) and the writing life, best Austin dining and other
destinations, and much more. For more on the story behind the story, see Follow the (YA) Reader and Secret Asian Man: Yoshi Kitahara and Feral Nights.


The Horn Book says of Feral Nights: “Smith’s blend of supernatural suspense, campy humor, and romantic
tension is addictive; allusions to both pop culture (‘Thriller,’ Monty Python) and literature (The Island of Dr. Moreau,
The Most Dangerous Game) add to the fun. Most satisfying of all,
Aimee and especially unassuming, injured Clyde leave their sidekick
roles behind to come into their own.”

Publishers Weekly chimes in: “Smith’s fantasy smoothly switches between the
three protagonists’ perspectives, while expertly blending the mythical
and the modern. The story’s sharp banter and edgy plot make for an
entertaining and clever story about loyalty and reconciling
differences.”

Kirkus Reviews cheers,
“…dialogue that sparkles with wit, filled with both literary and
pop-culture references. (‘You’re saying that you and my sister perform
exorcisms on vomiting children with rotating heads?’)…playful, smart
tone.”