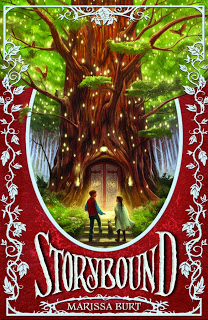 Marissa Burt is the first-time author of Storybound (HarperCollins, 2012). From the promotional copy:

When Una Fairchild stumbles upon a mysterious book buried deep in the basement of her school library, she thinks nothing of opening the cover and diving in.

But instead of paging through a regular novel, Una suddenly finds herself Written In to the land of Story – a world filled with Heroes and Villains and fairy-tale characters.

But not everything in Story is as magical as it seems. Una must figure out why she has been Written In – and fast – before anyone else discovers her secret.

Together with her new friend Peter and a talking cat named Sam, Una digs deep into Story’s shadowy past. She quickly realizes that she is tied to the world in ways she never could have imagined – and it might be up to her to save it.

It is a writing truth that should be universally acknowledged that a manuscript in the hands of a good editor is always in want of revision.

When I finished writing Storybound (then titled “The Tale of Una Fairchild”), I went through several rounds of revisions before querying agents. My agent, Laura Langlie, also helped me revise the manuscript. So I felt like it was in pretty good shape when we went on submission.

Oh, how little I knew! When Erica Sussman at Harper asked me if I’d be willing to do an exclusive revision with her I jumped at the opportunity. One phone call with general notes, one editorial letter, and another shorter round of revisions later, we went to acquisitions.

After Harper acquired the offer there was two…or perhaps three?…more revisions. And then copy edits. And first pass pages. And final if-it’s-not-too-late tweaks. 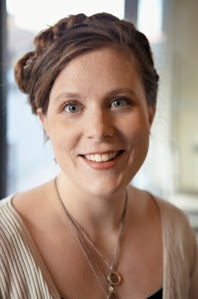 When I’m in the midst of revising – one of my favorite parts of the process – I feel like I’ve just dumped out all the pieces of a difficult jigsaw puzzle. There are times when everything feels like a hot mess, and I despair of any possibility of it all coming together to form anything that remotely makes sense.

But I keep working at it. Another piece here. That corner bit there. Then there’s a moment of inspiration. “If I insert this scene, then the others will come together perfectly!”

And, when I’m finished, I wonder how I could have ever submitted that horrible earlier draft for anyone to read. And I float up on the clouds with my new rock-star version of my book…until the next round of revisions. Which is really the important thing to keep in mind.

If you embrace the potential in each level of revision, your book will continue evolving and growing into a better, stronger version of itself.

That’s one of the key things I would recommend to other writers. Consider revisions as an opportunity to grow your skill as a writer. At every step along the way, I was thrilled that other people in the industry were willing to invest in me and this project.

Sure, it was challenging at times to think about cutting a whole point of view or a few characters, but I was – and still am – thankful for the professional input of my agent and editor.

Listen to all the suggestions, sit with them, and then try them out! You can always go back to an earlier version, but if you hang on to “that scene” and aren’t willing to risk something different, you may never discover how much better your work can actually be.

Yes, it can feel depressing to hit the delete button on that lovely chapter you thought was so brilliant. But then there’s room for whatever else you want to make up next. That’s the wonderful thing about being a writer. There’s no scarcity of creativity.

I was that girl who sat at the lunch table with her nose buried in a book. My report cards inevitably had the halfhearted scolding from teachers who wrote: “Marissa has been reading novels in class.”

I would read into the wee hours, the familiar scene of flashlight-under-the-covers enacted nightly at home. If I was being punished, my parents would sometimes confiscate the book I was reading at the time. (Oh, torture!) I read all manner of books when I was young – and still do – but fantasy remains one of my favorite genres. 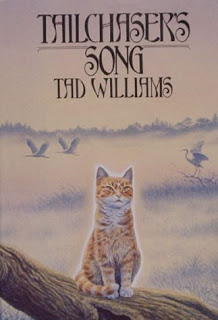 For some reason, I had an odd class schedule in middle school, which meant that I spent my study hall alone in the school library, accompanied only by the elderly nun who cataloged books for the students. I never did any schoolwork during this period. I can still see the particular spot in the library where the mythology and folklore books were stacked, and I worked my way through them one by one. Classic fairy tales. Greek mythology. Fables. I devoured them all.

So when I stumbled across my first fantasy novels, I recognized the echoes of fairyland at once. I read Tailchaser’s Song by Tad Williams (DAW Books, 1985) many times over in that seventh grade cafeteria. The Lord of the Rings trilogy by J.R.R. Tolkein (Geo. Allen & Unwin, 1954-1955) captivated me so much so that I wore an old keyring on a chain around my neck for most of the school year. Then I discovered Ursula K. LeGuin. Robert Jordan. George R.R. Martin.

I love the feeling of getting lost in a good book, and I think the extensive worldbuilding in good fantasy literature makes space for this especially well. When I began to write my own story (fantasy, of course), I discovered the lovely surprise that authors get to escape to their own created worlds as well – something that my twelve-year-old self would have approved of very much.

I’ve had to give this some serious thought. One of the wonderful things about the slew of books, blogs, and articles about the publishing process is that they provide a wealth of information that can help new authors. And this is one of the most overwhelming things as well.

The internet’s bottomless history of publishing advice is now at my fingertips, and I find myself with a growing to do list of everything a debut author “should” do to promote her book. And, to tell the truth, I’m not that convinced about the worthwhile-ness of much of it.

Oh, believe me, I want to market my book (please buy it!), and I’m willing to invest time in things I think will pay off. But I’ve had to learn to prioritize.

My agent gave me some great advice early on. She told me to start a blog…if I had a niche I could fill. If not, she said in so many words, then let the blogging thing go.

This is how I’ve approached many of the things on my to do list. Can I do this item well? Will it pay off for me? If not? I just let it go. I’ve mainly focused on real-life relationships.

Through the Apocalypsies, a group of 2012 debut authors, I’ve come to know several other authors in the Pacific Northwest. We meet monthly for coffee, mutual support, and to brainstorm group panels or appearances we can do together. This is an exponentially better way for me to participate in author events, besides the fact that we have a great time together.

I make space for school visits and look for opportunities to build connections to my local independent bookstores and libraries.

I’ve let go of the idea of book-related swag and a book trailer.

I still hold out hope for revamping my website, but I know this won’t happen before my book comes out.

It’s all a process – and a fluid one at that – and I would encourage debut authors to think strategically about their marketing plan, prioritize realistically given the amount of hours they have to put toward it, and to give themselves grace to do their best and enjoy the process – even if they don’t check every box on their to-do list.