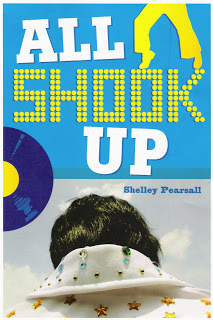 True confessions time. I’ve always dreamed of being a Broadway singer. If “American Idol” had been around in the 1980’s – and if I could sing — trust me, I would have been jumping in the audition line with all the other big-haired teens, hoping for my own golden ticket.

However, the sad reality is that I have zero musical ability. Cannot sing in tune. Cannot hum in tune. I spent three years in a high school marching band where I discovered that I’m also unable to do two things at the same time. That is, marching and playing an instrument.

But I think my own unfulfilled dreams of musical stardom are what eventually drew me to write about a middle-aged Elvis impersonator in my fourth novel, All Shook Up (Knopf, 2008).

In the story, Jerry Denny is a divorced, down-on-his-luck shoe salesman with big plans for a career as an Elvis impersonator — much to the chagrin of his teenage son, Josh. And in the midst of middle school angst and Elvis hair dye disasters, father and son must find a way to get along.

Readers often ask me why I chose to write about a group of people most often known for bad wigs and tacky costumes. Like most stories — it began with something I read. After seeing a feature about a local Elvis impersonator, I started wondering what motivated people to pull on a rhinestone-laden polyester jumpsuit and pretend to be the King of Rock n’ Roll. 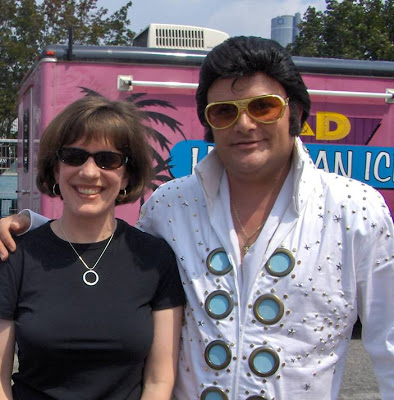 To find out, I became an Elvis impersonator groupie. I visited Las Vegas, the mecca for all Elvis impersonators. I traveled to their competitions (Elvis Fests). Learned about sideburns glue, wardrobe malfunctions, and gold sunglasses etiquette. Memorized the lyrics of at least 100 Elvis songs. Sat through one Elvis movie. Resolved never to sit through another one.

(One unrelated thing I discovered is that almost everybody can tell you a story about somebody they knew who met the real Elvis in person. All of us are six degrees of separation from the King, it seems.)

And authors may be closer to the King than we realize. The more Elvises I met, the more I began to see how much I had in common with the wig-wearing guys. 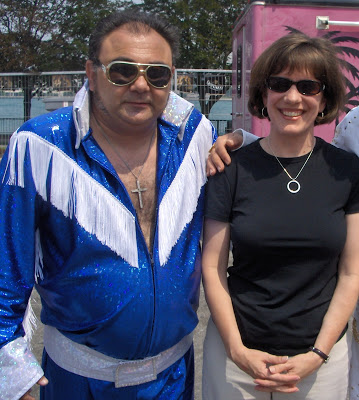 As an author, I could absolutely understand the desire to slip out of one’s life every once in awhile and step into the world of somebody else. In their “real lives,” the impersonators were factory workers, divorced dads, janitors, businessmen. On stage, they were transformed.

No matter how “un-Elvis” they looked on the outside, once they slipped into the role of being the King, they had the magic touch, the sparkle. They could put a smile on anyone’s face. Ironically, they got to show people who they really were — by being somebody else.

And I understand that feeling perfectly. While it would have been fun to belt out a song on a Broadway stage, I know my gig is writing. I slip into the lives of my characters. The page is my rhinestone jumpsuit. And as the King would say, “That’s alright, Mama…” 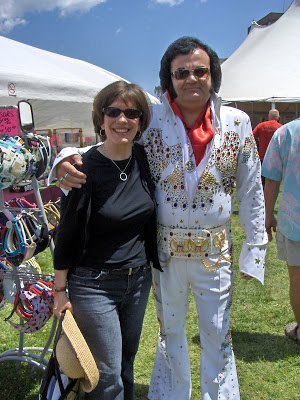 Author Interview: Shelley Pearsall on All of the Above from Cynsations. Peek: “I can still remember the jaw-dropping sight when he opened the door: the entire room was filled with giant rainbow-colored pyramids. They were suspended from the lights and lined up along the windowsills and bookshelves. It was a magical, almost gravity-defying sight.”

6 thoughts on “Guest Post: Shelley Pearsall on Writers, Elvis Impersonators, and All Shook Up”